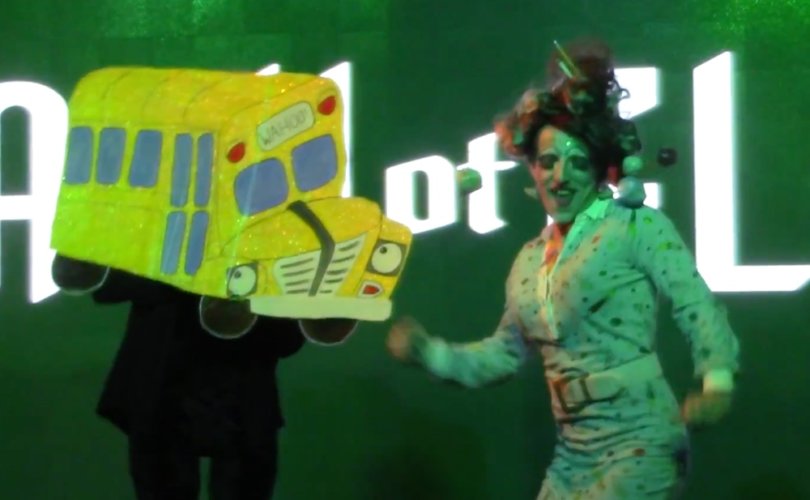 WARNING: Disturbing sexual details are included in this report.

VANCOUVER, Washington, February 8 (LifeSiteNews) – A drag queen who performed an x-rated obscene show dressed as a children’s beloved television character is scheduled to read to children at a public library this weekend.

Devin Crosland, who goes by the stage name “Clare Apparently” when he dresses as a woman, is scheduled to appear at Vancouver Community Library’s “Drag Queen Story Hour” in Vancouver, WA Feb. 9 from 2:30 PM until 3:30 PM.

In 2017 the drag artist performed a pornographic routine dressed as teacher “Ms. Frizzle” from the children’s television show The Magic School Bus. The act, [WARNING: link leads to explicit material] recorded and posted on Youtube by the performer, is accompanied by the 1980s pop song “I Think We’re Alone Now,” a celebration of underage fornication.

The performance was part of a burlesque show called “Death of Glitter: Genderf#ck Cabaret”. According to the event’s website, the show was created in 2015 “to raise funds for Portland, [Oregon] based gender non-conforming non-profits.”

“This is going to be the grooming of the next generation. We are trying to groom the next generation,” said Pontiff, who when dressed in drag goes by the name Santana Pilar Andrews, to Louisiana's Lafayette City-Parish Council during a Sept. 17, 2019 meeting.

The Vancouver Community Library’s decision to host a “Drag Queen Story Hour” for children was already controversial before Clare Apparently’s obscene performance came to light. The Library is defending the drag queen's invitation even after being made aware of the disturbing video.

A stream of comments on social media, eventually removed by the Library, showed that people objected to the event for different reasons. Some women were distressed by the ways in which drag performers enforce stereotypes about women. Others were concerned that children would be confused and disturbed by the presentation.

However, commentators who had seen Clare Apparently’s “Ms Frizzle” act were particularly incensed.

“If you want to celebrate inclusion and diversity, you could do a lot better than having a man who simulates pedophilic acts in his shows interacting with children at your library,” wrote Christine Daly Hawes.

“The sloppy vetting of your programming is astonishing,” she continued.

“At the very least we can protect our children from people who celebrate pedophilia in any form! This is inexcusable.”

The Library has re-posted a promotion for the event on Facebook, and the debate continues.

Dan Duringer is among the critics of Drag Queen Story Hour who believe that Clare Apparently’s Magic School Bus performance was a celebration of pedophilia, the school bus being a symbolic representation of children.

Duringer, a local school bus driver, told LifeSiteNews that “facilitating gender dysphoria is bad enough, but for FVRL [Fort Vancouver Regional Library] to allow the sexualizing of young children in drag queen story hours is even worse. Beyond belief is to have child-molestation-promoting Clare Apparently the trusted adult in the room.”

Duringer lives in the nearby city of Washougal, which is served by the Fort Vancouver library system. He learned about Vancouver’s Drag Queen Story Hour through a Facebook group that discusses family policy in Washington state. Eventually, a member posted a video of Clare Apparently’s Magic School Bus routine, and Duringer contacted the library’s trustees.

Amelia Shelley, the Executive Director of the Fort Vancouver Regional Libraries (FVRL), told Duringer via email that “Drag Queen Story Hour” was paid for by the Friends of the Vancouver Community Library and “intended to be a one-time event.” She indicated that it was for families who were interested. Apparently, it has been scheduled at a different time from the library’s usual storytelling event to avoid confusion.

LifeSiteNews reached out to Amelia Shelley but did not receive a response.

Duringer told LifeSiteNews that the FVRL has a history of supporting so-called “left-wing causes”. Over ten years ago, pro-family activists fought the library system for making pornography available to viewers of all ages. In 2006 FVRL promised to install filters on its computers to keep its premises “family-friendly.”

There will be a rally outside the Vancouver Community Library tomorrow during the Drag Queen Story Hour. The library is located at 901 C St, Vancouver, Washington, 98660.

To respectfully make known your views on the issue, please contact: