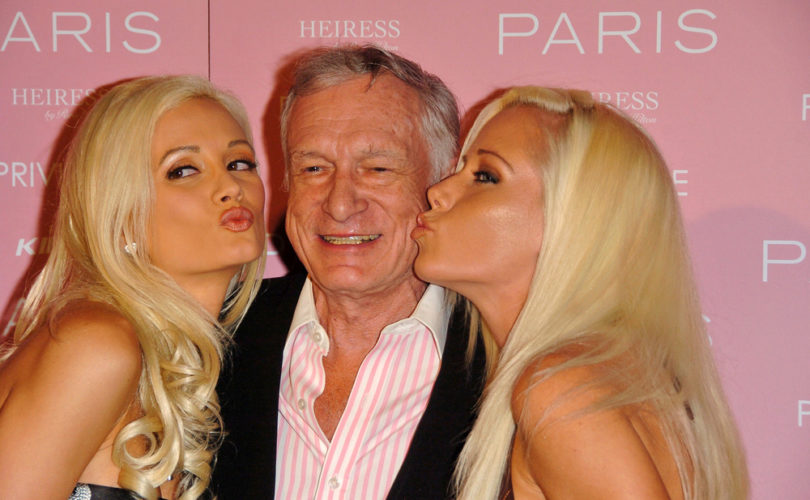 LOS ANGELES, June 12, 2015 (LifeSiteNews) – Holly Madison, Hugh Hefner's former “number one” girlfriend, says her years at the Playboy mansion in Los Angeles taught her the promiscuous lifestyle is “hollow emptiness” that led her to the point of suicide.

Madison, whose memoir, Down The Rabbit Hole, details her experiences as a Playboy bunny and the “twisted world” of Hugh Hefner, said that at his mansion she fell into deep despair, and thought about killing herself.

“Maybe it was the pot and the alcohol, but drowning myself seemed like the logical way to escape the ridiculous life I was leading,” she writes. “I just couldn't take my misery anymore.”

Madison, 35, who since 2001 slept with 89-year-old Hugh Hefner – “a man old enough to be my grandfather” – says that while in the bathtub one day, she thought, “If I just put my head under water and take a deep breath in, it would all be over.”

Madison said she felt like no one would miss her. “Of course my family would be devastated, but I rarely saw them enough for my absence to make a difference.”

She felt the other Playboy bunnies, with one possible exception, would not care that she was dead.

As for Hugh Hefner, she knew he wouldn't care, either. “I was certain I was just another warm body – as we all were. 'Just another blonde,' I could hear him say.”

Madison ultimately concluded that suicide would be in vain, because it would be “swept under the rug,” just like every other “scandal and ghost that once plagued Hugh Hefner.”

She said she has not spoken to Hugh Hefner in four years.

Playboy founder Hefner's girlfriends at the time, all seven of them, led a glamorous life, watched by millions on television. But Madison says in reality they were “vacant,” and just going through the motions for the world to envy.

Madison said she felt trapped in the mansion, and says, referring to its entrance gate, “I grew to feel it was meant to lock me in.” Her book describes life inside the Playboy mansion as a “nightmare.”

She describes “cat” fights and backstabbing “bunnies” behind the scenes, because Hefner worked the girls against each other for the sake of their “reality” TV show.

The Playboy beauty was actually unhappy and insecure with her appearance, and had cosmetic surgery done on her nose.

Now a married, redheaded mother of a two-year-old girl, Madison says, “Thankfully the only thing greater than my need to escape was my desire to share my experience. If I sunk my head below the water and went to sleep, no one would ever know the truth.”

Madison told US Magazine that she wants her daughter to “hopefully learn from [her choices] and not make stupid mistakes herself.”