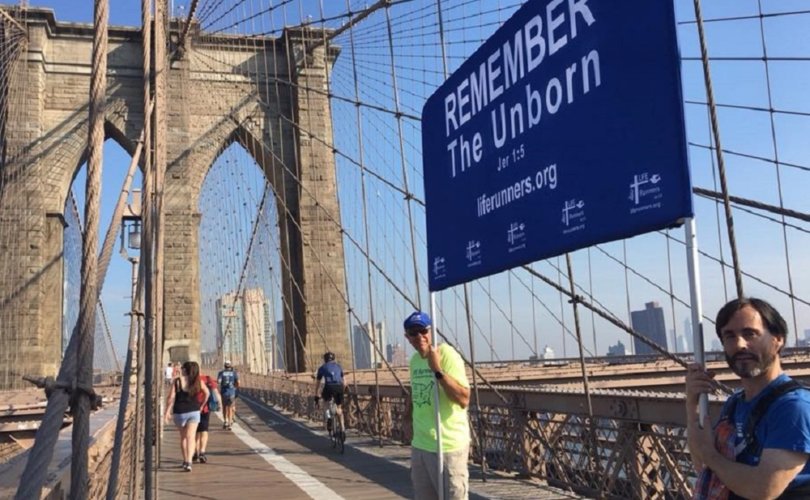 OMAHA, Nebraska, August 6, 2019 (LifeSiteNews) — Four teams of runners in the United States and other parts of the world are in the home stretch in the annual A-Cross America Relay, where runners and walkers seek to end the practice of abortion.

Wearing jerseys proclaiming the scriptural message “Remember The Unborn — Jeremiah 1:5,” which reads, “Before I formed you in the womb, I knew you, and before you were born, I set you apart,” participants from the East started their course at New York City’s Brooklyn Bridge; the West “arm” began at San Francisco’s Golden Gate Bridge; the North “arm” began at Grand Forks, North Dakota; and the South “arm” commenced in San Antonio, Texas. The four groups will converge in Kansas City, Kansas.

Dr. Patrick Castle is the founder and president of LIFE Runners. He told LifeSiteNews in an interview that participants are now less than a week away from the finish of the 7th annual A-Cross America Relay. “This is the largest spanning Pro-Life event in the world with 5,359 miles completed from July 4th to Aug 11th…all wearing REMEMBER The Unborn jerseys to impact hearts and minds for saving lives.”

Castle said he is confident that the relay constitutes the largest pro-life event in the world because it spans so many countries and distances.

According to its website, LIFE Runners has more than 120 chapters in dozens of countries including Canada, the United Kingdom, Germany, Ghana, Ireland, Poland, and Spain. Supporters of LIFE Runners all over the world can run a 5K course “remotely” in their own countries while wearing the LIFE Runners t-shirt at any time during the 40 days of the event. Castle said that if supporters are not able to join the runners on the course, they can “adopt 5K legs of the Relay” during the event. “The roster around the world now is 12,057 teammates,” he said, “ages 0.1 to 101. All of those teammates are involved in some capacity: prayer, sponsorship, running, and walking on the course or off the course.”

About half of the miles of route, Castle said, are physically completed on the course, while the remainder is accomplished by “remote runners or walkers” who participate elsewhere. “On the island of Fiji, there are about 500 LIFE Runners,” he affirmed, who adopt the state of Utah, who complete the 5K segements in their own country as a chapter.

Castle added that it is significant that 35% of the participants are aged 22 years and younger, while 25% are aged 18 and younger. “Those are interesting stats for the team demographic, and that’s good news for the prolife movement,” he said. Castle said young people are wearing the team jersey, not only on their runs, but also at their schools on the first Wednesday of each month in testimony to their commitment. In the Omaha area, Castle said there are 11 school chapters of the LIFE Runners.

Among the members of the team are auxiliary bishop Joseph Coffey of the Military Archdiocese of the United States, Cardinal Timothy Dolan of New York City, and Bishop Thomas Paprocki of Springfield, Illinois. Bishop Coffey serves as the spiritual director of the team. Altogether, there are 14 bishops who have endorsed LIFE Runners.

In an interview with LifeSiteNews, the former Air Force officer and science educator said LIFE Runners is the largest pro-life “team” in the world because its members wear identical jerseys and gather in “huddles” to prepare for participating in runs and prayerful vigils at abortion facilities. Their team cheer is “All in Christ for prolife!” Team members pledge to pray, and to recite a creed that says, inter alia:

We believe in the dignity of all human life from conception to natural death.

We run as a Prayer, to defend children in the womb, so that they may be born and united with our Christian community.

We run to build Endurance, for the race is long and we must keep our eyes fixed on You Lord …

We pray and run in Your name, Jesus Christ. Amen.

The official route through the U.S. offers participants opportunities to pray at abortion facilities to witness their rejection of abortion. Castle told LifeSiteNews that team members’ jerseys serve as a sign that many post-abortive women say they wish they had seen before undergoing an abortion. In an earlier interview with LifeSiteNews, he said the shirts are “a sacrificial prayer offering, to help our neighbors choose life and heal from the scourge of abortion.”

Dr. Castle holds a Ph.D. in nano-analytical chemistry and served as an Air Force officer. He had an assignment in weapons of mass destruction (WMD) defense and advised members of Congress during his military career as a scientist. He told LifeSiteNews in an interview that abortion is effectively a WMD because of the extent of its lethality. He mused, “Isn’t it interesting that, strategically, I am still a weapons of mass destruction defense officer with the WMD of abortion? Abortion has claimed at orders of magnitude more life than all WMD in the history of the world. It is the most potent WMD the world has ever seen.” He noted that the U.S. has lost approximately 1.2 million to combat in its history. By way of comparison, he said that in 1991 alone, there were 1.6 million abortions. “At the current pace, we are at 900,000 per year,” he said.

LIFE Runners is organizing its annual Route 66 Marathon in Tulsa, Oklahoma, which will be held November 23–24. According to Castle, Alan Webb, who holds the American national record in the mile, and his wife Julia, an Olympic trials qualifier in marathon, recently became team members.