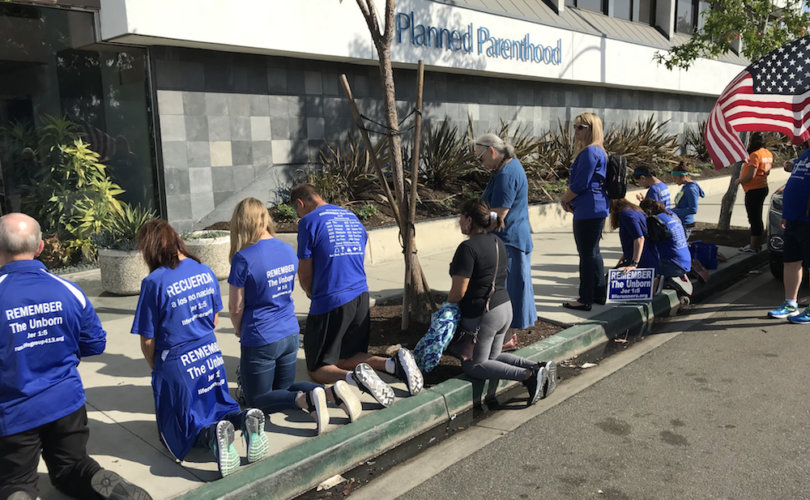 There is now a new chapter at Holy Innocents School in Long Beach, a chapter for the city of Long Beach, and another in Mexico. The group’s Spanish gear was effective in reaching a larger audience in Long Beach.

But there were important individual witnesses as well.

“LIFE Runners brought the pro-life message to Long Beach and many were hungry for it,” said Dr. Pat Castle, the president and founder.

Most of the new memberships came at the race expo and pre-race meal at Holy Innocents Church, Castle said.

A new and effective opportunity to share the pro-life message

Perhaps most significantly, because LIFE Runners was recognized for the first time as a race charity, the door was opened for members to evangelize for life to thousands of runners and others at the pre-race expo – something the group did not anticipate.

“This was the first year that we requested an expo booth at our fall national race and expected to be denied based on their being likely to label our faith cause as a political cause,” Castle said. “God opened doors for us to be an official race charity.”

The group was excited at its approval for an expo booth and as an official Long Beach Marathon charity.

“The expo booth afforded two days of interacting with the 15,000 participants plus thousands of their supporters with them,” Castle explained. “We reached 250 new teammates.”

“We don’t see people like you in our area,” Castle said they were told at the expo.

Castle told LifeSiteNews that a parent took the opportunity to educate a child while looking at the LIFE Runners banner, asking the child, “Do you know what that means?”

“God’s people want a way to be a voice for the voiceless and that is what we gave them,” Castle said. “Many people signed up for the team.”

At the Long Beach expo, team members gave out LIFE Runners Creed holy cards with the image of the pregnant Virgin Mary, along with “REMEMBER The Unborn – Jer 1:5” wristbands, stickers, keychains, lanyards, car magnets, and signs.

Individuals who wanted a jersey for the races purchased those and signed up. The LIFE Runners jersey is a team requirement for public witness.

“The Long Beach Marathon was our team’s 10th birthday race,” said Castle. “We had such powerful team ministry at the expo, abortion facility, and races with ‘REMEMBER The Unborn’ jerseys and big banner, impacting hearts and minds for saving lives.”

All people are precious

At the Saturday morning 5K, the group met a young lady named Angela who has Down syndrome.

“We gave Angela a high-five while she was racing the Long Beach 5K,” Castle said. “Her mom wanted to stop for a photo with our big blue “REMEMBER The Unborn” banner, but Angela kept racing forward.”

“At the finish line, Angela gave us all hugs,” he said. “We gave her a LIFE Runners wristband and sign. Angela is a powerful sign that all life is precious.”

Each teammate had a story from the weekend, said Castle.

Prissila raced her first half marathon and offered it up for her mom and her daughter Fatima, who lived five days after birth and is buried in nearby Anaheim. Both passed away last year.

In a written reflection on the Long Beach race experience, Life Runners member Karen described the support pro-lifers give to pregnant women facing crisis or unplanned pregnancy as being similar to when people from the community come to a race route to support runners, whether with water, other sustenance, or words of encouragement.

“In the pro-life movement, we don’t just cheer the women on at a mile marker,” Karen said. “If they are struggling, we drop our signs and offer to run them home.”

LIFE Runners began October 12, 2008, with just 12 teammates at the Chicago Marathon to raise prayers and funds for the pro-life cause.

“We have added 2,350 LIFE Runners in the last 10 months,” he told LifeSiteNews.  “Growing dramatically!”

Part of the LIFE Runners outreach has Castle, a Nebraska-based retired Air Force Lieutenant Colonel, traveling within and outside the U.S. to share a pro-life message.

Non-runners welcome – faith and pro-life witness a must

For the LIFE Runners Team, running is optional, the jersey required, and faith is needed, the group says. Half of the more than 9,100 teammates run and half do not – but all wear the “REMEMBER The Unborn – Jer 1:5” jersey.

Members also get a weekly devotion and a monthly team update, as well as a monthly text reminder to wear their jersey on the first Wednesday of each month in unity with LIFE Runners around the world.

Those 9,100 members are spread across all 50 U.S. states and 35 countries, and include several Catholic bishops.

Some of the bishops have also had Castle speak about LIFE Runners and the pro-life cause on their radio programs or at diocesan events.

Walking the walk; running the race

Bishop Paprocki has been a LIFE Runners member and the group’s national chaplain since 2011.

As chaplain, he prays for the team and attends the annual national events as he can, which aside from the group’s annual Fall National Marathon in different U.S. cities, includes the summer national A-Cross America Relay.

Paprocki, who has run marathons to raise funds and awareness for the pro-life and similar causes in the past, completed his 24th marathon with LIFE Runners at Long Beach.

LIFE Runners’ fall race weekends include a prayer rally at the local abortion facility, at which Paprocki prays with the group.

This outreach has proved effective in the past. After one race-associated prayer rally, the group heard from a Planned Parenthood security guard who told them he quit his job because of their prayer witness.

This year, before the LIFE Runners members’ prayer at Planned Parenthood, they were warned to stay out of the alley adjacent to the abortion center for their own safety. After their started their prayer time, they happened to see a security guard inside the facility using his phone, seemingly in response to their presence.

Not long after, six police cars came to the abortion facility with lights and sirens going, and despite being on a public sidewalk, the group didn’t know whether or not the guard had called the police to have them arrested. It turned out the police were there to ensure that the LIFE Runners could pray in peace. It’s not known if the security guard was involved in summoning them.

Further, Castle said, “We met a post-abortion mother who prayed with us and is now a LIFE Runner.”

LIFE Runners in the past has not experienced any jeering during their races, but they did have some this year.

Castle attributes that to a number of things.

The race occurred the same weekend as the Senate confirmation for Justice Brett Kavanaugh and heightened tensions accompanying the vote could have brought some about.

But also, aside from the LIFE Runners jerseys proclaiming a pro-life message, the group had more visibility with its large banner at the start and finish line.

There were some challenging comments and a LIFE Runner was spit on while manning the banner, but Castle pointed out that the group did not respond.

“Nonetheless, we received many more cheers and we cheered all the runners to keep it positively pro-life!” he told LifeSiteNews. “We responded to all with joy, encouragement, love and prayer.”

Bishop Paprocki and LIFE Runners member Father Joe Coffey celebrated Mass with the group at the Church of the Holy Innocents in Long Beach the night before the marathon, and the parish hosted a pre-race dinner at which the group took part in fellowship at the parish and shared more about the LIFE Runners mission.

Next year’s race is the 2019 Tulsa Marathon.