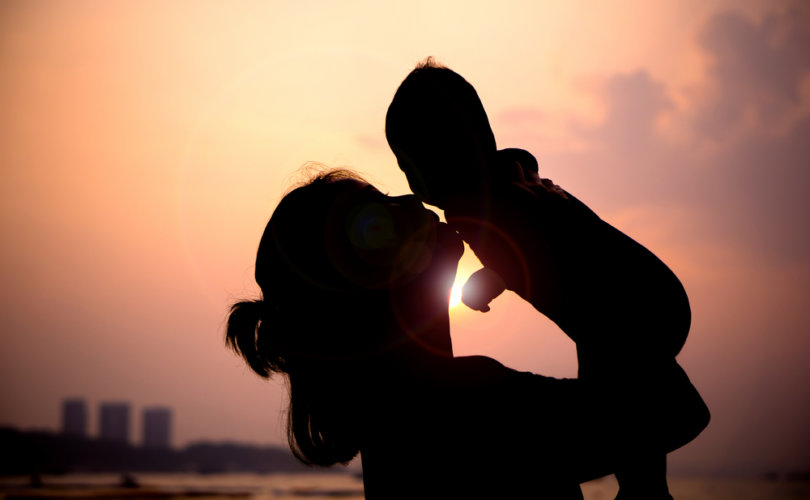 MANKATO, Minnesota, 5 September, 12 (LifeSiteNews.com) – Rachel remembers being excited as she purchased a red Bound4LIFE bracelet with the single word LIFE engraved on it. Wearing the bracelet wasn’t a fad or fashion statement for her, but a sign of her commitment to pray daily for the ending of abortion.

But one day, as Rachel was loading groceries into her car from Walmart, the LIFE Band inexplicably slipped off her wrist and landed on the parking lot, without her even knowing it had happened.

“I looked everywhere for it — in my car, my bedroom, everywhere,” said Rachel in a testimony obtained by LifeSiteNews. “I finally decided that it must have slipped off while I was carrying those groceries to the car.”

While being perplexed about how the bracelet could have fallen off her wrist without her knowing it, Rachel nevertheless hoped that “somebody who needs it will find it.”

Not many months later, Rachel began a job as a server in a local Olive Garden restaurant. One day a mother and her newborn baby came in and were seated in her section.

Rachel greeted the woman at the table and remembers her being “very pretty” and “probably in her mid-20s.”

“She seemed a bit shy, but she smiled as I greeted her.”

Rachel served her a drink, took her order, and made some small talk about how the woman’s baby was beautiful and seemed so peaceful as she slept in her baby seat.

As Rachel talked to the woman, she caught a quick glimpse of a red bracelet wrapped around the woman’s wrist with the distinctive word LIFE engraved on it.

“You have a LIFE Band, huh?” Rachel ventured.

The woman was at first confused about what Rachel was referring to, but then clued in.

“Yeah, I found this in a parking lot,” the woman replied.

The woman recounted that a few months previous she was dismayed to find herself unexpectedly pregnant. She had gone out shopping to distract herself because she had just scheduled an appointment to get an abortion and was terrified about it. The appointment was two days away.

As the woman walked from her car into Walmart, a red bracelet lying on the ground caught her eye. She picked it up and saw that it had the word LIFE on it. She quickly stowed the bracelet in her purse and continued with her shopping.

That night the woman sat in her room crying, filled with an awful dread about what she was about to do. She was worried about what her parents would think and felt the need to “get rid of the problem.” As well, her boyfriend had abandoned her, making abortion seem like the only choice that was left.

At this point in the woman’s story, Rachel could not hold back her tears any longer. She completely forgot that she was supposed to be working and that she had other tables to serve.

The woman recounted how at this bleakest of moments, she suddenly remembered the bracelet in her purse. She pulled it out and held it in her fingers until she drifted off into a troubled sleep.

At one point she suddenly awoke in the middle of the night with the word “LIFE” surging through her mind and heart.

In the morning, the woman canceled her abortion appointment.

“I was stunned,” Rachel remembers about hearing this incredible story. “All I could do was cry. This beautiful baby girl that was sitting in the carrier was her almost aborted baby. I just couldn’t stop crying.”

Through sobs and sniffles, Rachel told the woman how she had lost a LIFE Band in the very same parking lot, not many months ago.

“I told her the meaning behind the band and what the word LIFE on the band actually meant.”

Now both women were crying, with tears of joy and gratitude streaming down their faces.

Through her sobs, the woman managed to whisper to Rachel: “Thank you. If you hadn’t lost this bracelet, I wouldn’t have my beautiful baby next to me.”

Lou Engle, preacher and co-founder of The Call, related Rachel’s amazing story during a sermon at Bethel Church in Redding, California a week and a half ago.

“God is in the business of rescuing life,” he proclaimed to an enthusiastic crowd. “I tell you, nothing has encouraged me like [this story] in this whole movement.”

Engle mentioned that he loves telling Rachel’s story because it gives him faith to keep praying the prayer of intercession connected to the LIFE Band: “Jesus, I plead your blood over my sins and the sins of my nation. God, end abortion and send revival to America.”

Matt Lockett, director of Bound4LIFE, which makes and distributes the LIFE Bands, told LifeSiteNews that Rachel’s testimony is “extraordinary” since it exemplifies how God can “triumph” through a humble piece of rubber.

Carrie Konig, a mother of five who brought Rachel’s story to the attention of LifeSiteNews, pointed out that “God can use anything, even a red bracelet with the word LIFE on it, to save an unborn baby from being aborted.”

Konig said that Rachel’s story dispels criticism that the red LIFE Tape and the LIFE Bands are useless gimmicks in the fight against abortion.

“This testimony has assured me that, as God’s word says, “He uses the foolish things of this world to confound the wise (1 Cor. 1:27).”

Rachel says that she will “forever remember” the woman with her precious little daughter.