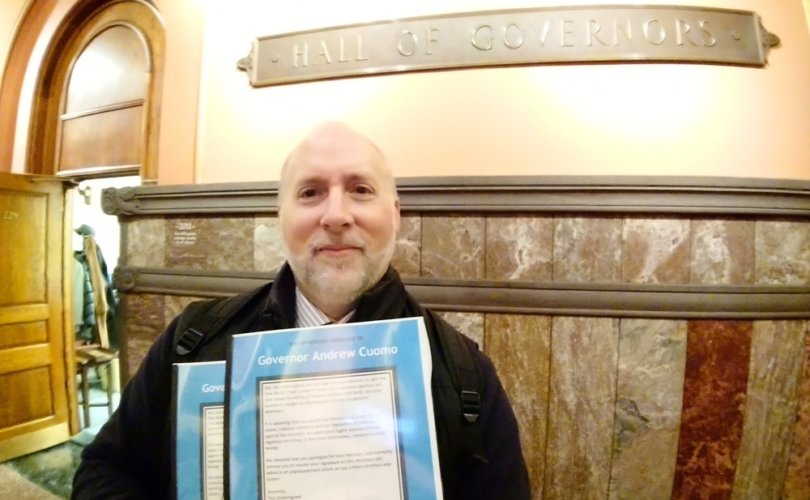 ALBANY, New York, February 7, 2019 (LifeSiteNews) – New York Governor Andrew Cuomo’s office received a petition yesterday with over 137,000 signatures from LifeSiteNews readers demanding that he apologize for directing the One World Trade Center in Manhattan be lit in pink to celebrate the passage of his state’s gruesome abortion-until-birth law.

Known as the Reproductive Health Act, the new law declares that every “individual” who becomes pregnant has the fundamental right to have an abortion, erases the state’s recognition of preborn babies older than 24 weeks as potential homicide victims, removes abortion from the penal code entirely, and allows non-doctors to commit abortions.

Before making the delivery, LifeSiteNews petition manager Scott Schittl stood outside the governor’s office and prayed the rosary with about a dozen LifeSiteNews readers who came to support the effort. A number of them explained why they took the time to show their solidarity:

“I’m here to be a voice for the voiceless, to take a stand against the disgusting Reproductive Health Act that passed recently here in New York,” said 26-year-old Irene.

“We’re here to ask Governor Cuomo to reconsider his outlook on life,” announced Jean, who had travelled from Massachusetts. “He’s supposedly a Catholic” yet “he’s doing horrible things for our country.”

“We want him to come back to the faith, [to] support life, [and to] love both mother and the baby,” she added.

“I’m here today to stand for life,” said Lynn. “We all stand together for the unborn.”

Those gathered prayed for an end to abortion and for the conversion of Gov. Cuomo.

Although Scott was not able to meet personally with Cuomo, he asked the governor’s secretary to convey LifeSiteNews’ request to him: “Apologize for signing this atrocious bill and for making light of taking human life.”

I am outraged by your decision to light the One World Trade Center in honor of an extreme abortion bill that allows the killing of unborn children until birth, and puts women in danger by allowing non-doctors to perform abortions.

It is appalling that you would use this building, a symbol of peace, national solidarity and our opposition to violence against the innocent, to celebrate a highly divisive bill that legalizes the killing of the most defenseless, innocent human beings.

I demand that you apologize for your decision, and earnestly entreat you to revoke your signature on this atrocious bill, which is an unprecedented attack on our unborn brothers and sisters.