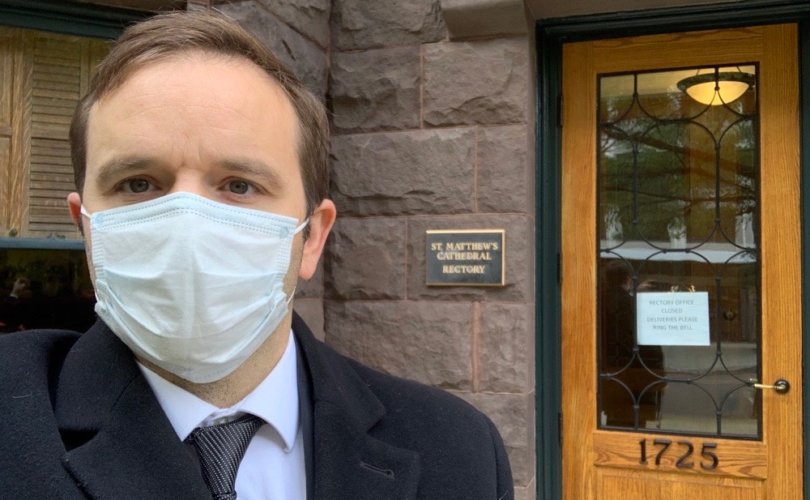 LifeSite's Gualberto Garcia Jones after delivering the petition to the Cathedral of St. MatthewLifeSiteNews

WASHINGTON, D.C., November 2, 2020 (LifeSiteNews) – LifeSiteNews has delivered our petition to Archbishop Wilton Gregory, which asks him to apologize to President Donald Trump and the Knights of Columbus for the harsh and divisive remarks which he made about the president’s planned visit to the Shrine of Pope St. John Paul II in early June.

Recall the Archbishop’s caustic remarks about the president’s visit:

I find it baffling and reprehensible that any Catholic facility would allow itself to be so egregiously misused and manipulated in a fashion that violates our religious principles, which call us to defend the rights of all people even those with whom we might disagree.

“While Archbishop Gregory called the President's visit ‘baffling and reprehensible,’ and went on to suggest that the Shrine and the Knights of Columbus allowed themselves to be ‘egregiously misused and manipulated’ by the president, nothing could further from the truth,” said Scott Schittl, LifeSite’s petition director.

To dispel some of the archbishop's misinformation, the Knights released their own statement about the presidential visit, which was far more gracious in tone:

This [President Trump's visit] was fitting given St. John Paul II was a tireless advocate of religious liberty throughout his pontificate. International religious freedom receives widespread bipartisan support, including unanimous passage of legislation in defense of persecuted Christians and religious minorities around the world.

Trump’s visited had been timed to coincide with his signing of a new executive order on religious freedom.

“Even though the petition has now been delivered, we are still praying for Archbishop Gregory to do the right thing and apologize for his remarks which appeared to discourage presidential prayer, just at a time when our nation needs more prayer and not less,” said Schittl. “Please join us in praying for Archbishop Gregory and for President Trump.”