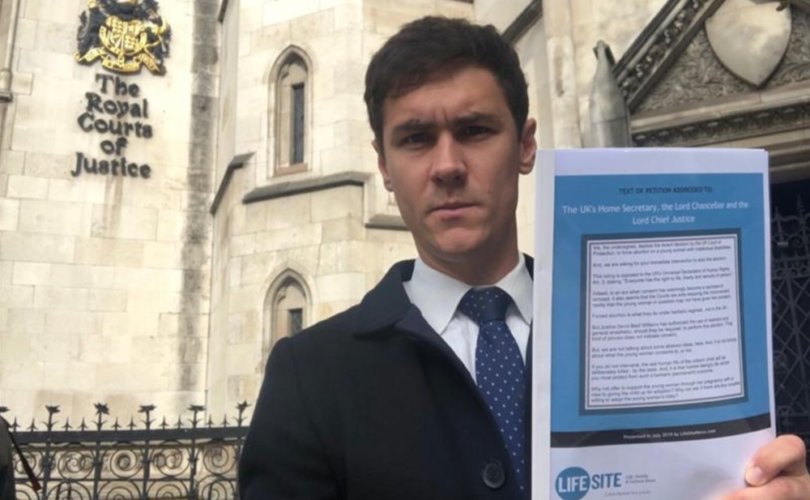 LONDON, England, October 18, 2019 (LifeSiteNews) — This afternoon, LifeSite’s Paul Smeaton delivered a petition with thousands of signatures to the U.K.’s Lord Chief Justice against forcing a young woman with developmental disabilities to have an abortion.

Within the past week, Justice David Basil Williams of the U.K.’s Court of Protection ordered that an abortion be carried out on a woman who is intellectually disabled.

This petition pleads with the Lord Chief Justice, the Home Secretary, and the Lord Chancellor to step in to do what they can to appeal this barbaric order — and stop the abortion.

The state should never be in the business of forcing abortions — especially not Britain, the cradle of parliamentary democracy.

In many ways, it is akin to China’s forced abortions, which are the blood-red bedrock of that country’s failed family planning policy.

Not only is this a state-sanctioned murder against of one of its own people, but it is also the gross violation of the mother’s “bodily autonomy,” as is any abortion towards the bodily autonomy of the unborn child.

The “pro-choice” lobby has been silent on this grave injustice, despite the fact that the woman being forced to abort her child is not being given a choice.

Her foster family and medical caregivers are in favor of the forced abortion. No reports state that the woman has given any consent.

Justice David Basil Williams has authorized the use of restraint and general anesthesia, should they be required, to perform this abortion.

That kind of proviso does not indicate consent.

If the Home Secretary, the Lord Chancellor, and the Lord Chief Justice do not intervene, an innocent unborn child will be deliberately killed.

This is the second time in only three months that this same situation has occurred in the U.K.

On the first occasion, the decision was quashed, and the abortion was stopped. But in this case, it seems that the state may get its way unless there is a serious intervention.

Please learn more about the incident that led to the petition by CLICKING HERE.

Please find the petition by CLICKING HERE. (Yes, you can still sign it if you haven’t already.)