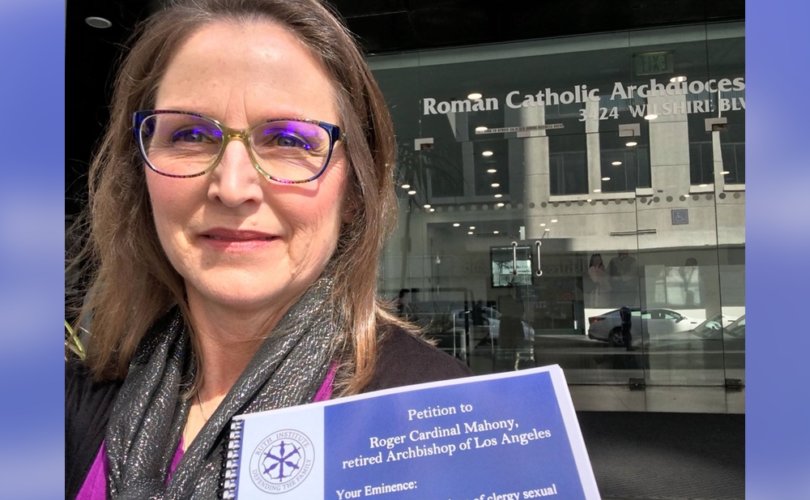 Editor’s note: LifeSiteNews appreciates Dr. Jennifer Roback Morse and the Ruth Institute for their collaboration with LifeSiteNews on this petition project

The two petitions totaling more than 10,000 names protested the archdiocese standing by while retired Cardinal Roger Mahony spoke at the Los Angeles Religious Education Congress (LA REC) amid the continued devastation of the Church’s clergy sex abuse scandal. Mahony has a contentious history of cover-up with sex abuse cases, which resulted in his having been removed from public duties in the archdiocese several years ago by its current leader, Archbishop José Gómez.

The event ran from Thursday through Sunday, and Mahony gave a workshop at the LA REC on Saturday titled, “Connecting Junior High and High School Students with the Volatile Immigration Issues.”

LifeSite delivered the petitions to the archdiocese located in Los Angeles Friday morning, the opening day of the three-day adult session of the REC.

“It beggars belief that the REC organizers would invite Cardinal Mahony,” LifeSite’s petition stated, “who is known to have covered-up for abuser-priests, to speak on how to connect with children!”

“It is unconscionable that the organizers should have invited Mahony to speak at the REC at all,” it continued. “But, it is all-the-more insulting to the faithful that he should be invited to speak about connecting with youth!”

Addressed to the organizers of the REC, the hard copy of the LifeSite petition that was delivered the archdiocese Friday contained 5893 names and has continued to accumulate signatures. A petition from the Ruth Institute containing some 4300+ names asking Mahony directly to withdraw was delivered along with LifeSite’s petition.

“His participation is a travesty,” the Ruth Institute petition stated, continuing on to list the various reasons why. “Cardinal Mahony should voluntarily withdraw from participating in the Los Angeles Religious Education Congress.”

The LA REC, long known for dissenting presentations and liturgical aberration, along with its repetitive LGBT affirmation, is presented by the LA archdiocese, conducted in the neighboring Diocese of Orange, and promoted as the largest gathering of its kind in the U.S.

Criticism and concern were intensified this year with the scheduled appearance from Mahony, who led the Los Angeles archdiocese from 1985 until his 2011 retirement. Mahony was found to have had secreted his knowledge of abusing priests and protected the offenders from prosecution, and also moved some abusers after they’d had counseling, at times out of state to skirt reporting laws, where they could abuse again.

Mahony was reproached by Gómez in 2013 following the court-ordered release of archdiocesan files in the wake of a 2007 sex abuse lawsuit settlement, which was the largest payout in Church history ($660 million).

Once the files were released, Gómez publicly removed Mahony going forward from having “any administrative or public duties” in the Archdiocese of Los Angeles.

Mahony, who has flouted the sanction, has reportedly apologized for his handling of sex abuse cases, met with victims, and set up a victims assistance office.

But critics say this is not enough.

Because he embodies the Church hierarchy’s mishandling of its abuse scandal, they say, Mahony should not be making public appearances at Church events, and further, it’s a slap in the face to the victims of clerical sex abuse.

Security was at the ready during Mahony’s REC workshop. During the question and answer period, the cardinal avoided engaging the question of one particular participant. Since Mahony did not allow the question, it was not clear whether it was germane to the session topic of immigration. As the man attempted to ask the question, Mahony told him he’d already talked to him and security approached, with Mahony then escorted from the venue via a side entrance.

To respectfully communicate concerns on Mahony’s appearance at the L.A. REC, contact: