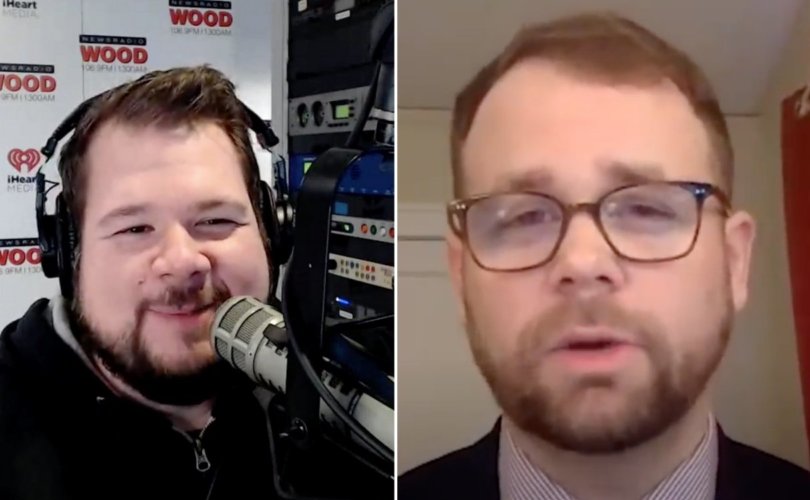 January 12, 2021, GRAND RAPIDS, MICHIGAN (LifeSiteNews) — During an appearance on West Michigan Live with Justin Barclay earlier today, LifeSite journalist Stephen Kokx said that social media’s decision to ban President Trump is a sign that “corporate authoritarianism” is on the rise in the United States.

Kokx, who lives in Grand Rapids, Michigan, was speaking with Barclay about Big Tech censorship when he said that he believes the real goal of Facebook and Twitter’s ban is not to merely silence the president but instead to attack patriotic conservatives and Christians who supported him over the last four years.

Barclay asked Kokx to appear on the hour-long, terrestrial radio program — aired locally on 106.9 FM and on 1300 AM — to talk about censorship issues that LifeSite has been facing in recent days.

Last Friday, social media scheduling app Buffer cancelled LifeSite’s account without any warning. LifeSite had been using the app for more than four years to send its stories out to Facebook and Twitter.

On Monday this week, scheduling app Sendible also banned LifeSite from using its services after just one day of use. LifeSite has not received a response from either Buffer or Sendible as to how their terms of service were violated.

Barclay is a Christian radio host who gives motivational speeches and makes public appearances in Western Michigan and elsewhere. He regularly shares Bible verses on his Facebook and Twitter accounts. He also has a free “good news” email newsletter you can sign up for by clicking here.

Kokx informed Barclay about the months-long investigation LifeSite conducted in 2020 titled Uncensored: Big Tech vs. Free Speech. That investigation provided irrefutable evidence that pro-life and Christian groups across the country have been censured and attacked by social media giants over the last several years.

Barclay asked Kokx where he thinks things will go from here, to which Kokx said that in all likelihood it will only get worse. Kokx said Christians need to make sure they are self-sufficient in the communities they live in and that they need to build their own social media platforms as best they can, while also finding unique ways to stay in touch with one another and help one another out. He pointed to LifeSite’s LifeFunder tool as an example of that. Kokx believes that praying for perseverance and being willing to be a martyr is what people should focus on in the days, months, and years ahead.