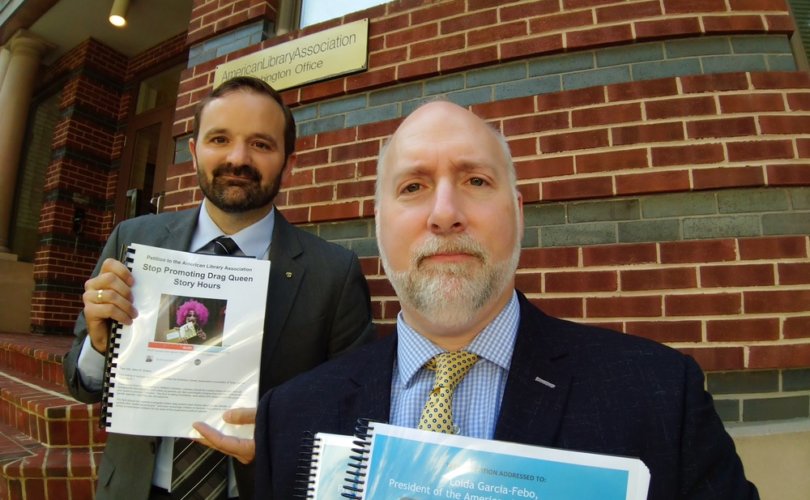 WASHINGTON, D.C., July 11, 2019 (LifeSiteNews) – On Wednesday, representatives from LifeSiteNews and the Personhood Alliance hand-delivered nearly 100,000 signatures to the American Library Association (ALA), against their promotion of the “Drag Queen Story Hour” (DQSH) phenomenon.

Scott Schittl, Campaigns Coordinator with LifeSiteNews and Gualberto Garcia Jones, President of the Personhood Alliance, met with the Senior Director of Public Policy & Government Relations Dr. Alan Inouye at the ALA’s headquarters in the nation’s capital.

During the meeting, Schittl and Garcia Jones focused on four main issues:

Schittl and Garcia Jones also delivered the message that we would be pursuing this issue – on grounds of child welfare – at both the state and federal level, and that we will be seeking to have Congress and state legislatures look at the issue, with a view to banning DQSHs (and other sexualized agenda topics) from libraries and classrooms.

Inouye said that he would pass along the petitioners’ concerns and help arrange further meetings.

Speaking about the delivery and the petition, LifeSiteNews’ Schittl said: “We are really enthusiastic about the fact that this petition struck such a chord with our readers. We want to thank everyone for signing this petition, and we want you to know that, where DQSH is concerned, this is only the first phase of our campaign.”

“We are committed to ensuring that this perverted practice is stopped. The psychological, spiritual, moral, and physical well-being of America’s children is at stake.”

If you have already signed the petition, but haven’t yet shared it with your friends, family, neighbors, and colleagues, please take a moment to cut and paste THIS LINK into an email asking them to sign it.

We will continue to ask people to sign and share this petition until libraries cease to hold these events.