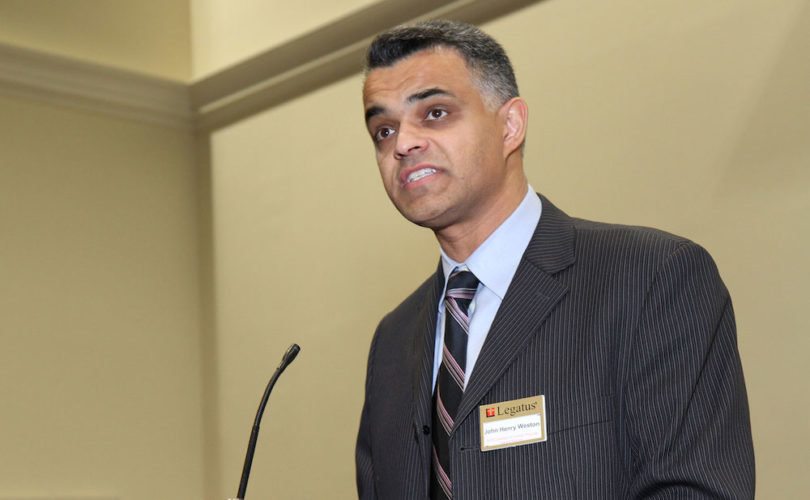 October 19, 2017 (LifeSiteNews) – There has been a “monumental shift” over the past four years in how the Vatican interacts with promoters of population control, one of the founders of LifeSiteNews told the International Population Conference.

“These past four years have been the most painful and difficult reporting we have ever done,” John-Henry Westen, Co-Founder and Editor-in-Chief of LifeSiteNews, told the online conference’s attendees.

Whereas Pope St. John Paul II II “actually called on pro-life groups to involve themselves in the battle against population control,” Pope Francis has invited some of its biggest proponents to speak at the Vatican and even given credence to some of their positions.

John Paul the Great urged pro-life groups to lobby the United Nations against population control, but now the Vatican under Pope Francis works with some of the biggest promoters of birth control at the UN.

Under Pope Francis, abortion supporters like Paul Ehrlich, one of the founders of the modern movement to dramatically reduce human reproduction even if by coercion, have been invited to address the Vatican. Ehrlich has said Church teaching on contraception is tantamount to terrorism. Ehrlich is the author of the discredited alarmist book “The Population Bomb.”

Pope St. John Paul II “understood” that “there was actually a movement” by the population control movement to use public sentiment to assert greater control over the world “or to implement a program of population control,” said Westen.

The “mild-mannered” saintly pope opposed this vehemently and reiterated in Evangelium Vitae and Familiaris Consortio Church teaching against the state limiting family size. John Paul II’s “stinging criticism” of population control put in their places “those who would threaten the poor.”

Despite John Paul II’s pleas that the poor be respected and not eliminated, “we are killing the third world by imposing abortion on them,” said Westen.

Westen outlined the history of the West’s attempts to impose contraception and abortion on developing nations.

Westen offered an explanation similar to one given by Fr. Shenan Boquet and Dr. Brian Clowes in a talk on October 18: developing countries using their natural resources and becoming more powerful was seen as a threat to the west.

This is one of the reasons wealthy countries often give funding and aid they to poorer countries on the condition that they accept contraception programs.

Westen said this is intentionally done in a deceptive way.

“There’s a lot of inherent racism in this concept of population control,” he said.

In paragraph 60 of the encyclical, Pope Francis criticizes the “extreme” view that humans are a threat to the ecosystem.

But he also then says another “extreme” is “those who doggedly uphold the myth of progress and tell us that ecological problems will solve themselves simply with the application of new technology and without any need for ethical considerations or deep change.”

The guise of reducing carbon emissions is a “perfect tool” for population controllers to use to impose their agenda, Westen warned. And one of the biggest ways this supposedly can be done is by having fewer children.

“The pope has shown himself to be a believer in climate change,” he said, and has made “alarming proposals” about man-made climate change.

Pope Francis has suggested a global government could be a solution to environmental problems.

The pontiff has called for thinking of a “true world political authority,” Westen explained, which would play into population controllers’ desires to sanction countries that don’t limit reproduction.

Westen also pointed to the pope’s seeming endorsement of the use of artificial contraception in cases where there was a threat of the Zika virus causing a birth defect in a baby. There may be a risk for a baby to have Down syndrome if the mother is over 40, he said, but the Church doesn’t approve of contraception in those cases – and in fact, there is always some risk that a baby won’t be perfect in the eyes of the world.

Westen urged pro-lifers to pray and fast because the current situation is an unprecedented, “unthinkable” problem.

“I don’t mean to scandalize anyone,” he said. He doesn’t point out concerning comments from Pope Francis “with any kind of want for attention or anything else.”

Rather, it’s to encourage the laity to defend the truth and pray for the pope.

“These issues are the most serious I’ve ever seen in my time,” said Westen. He said historians he has spoken with say what’s happening in the Church today has never been experienced in the Church before.

“It calls for ardent prayer,” he said.