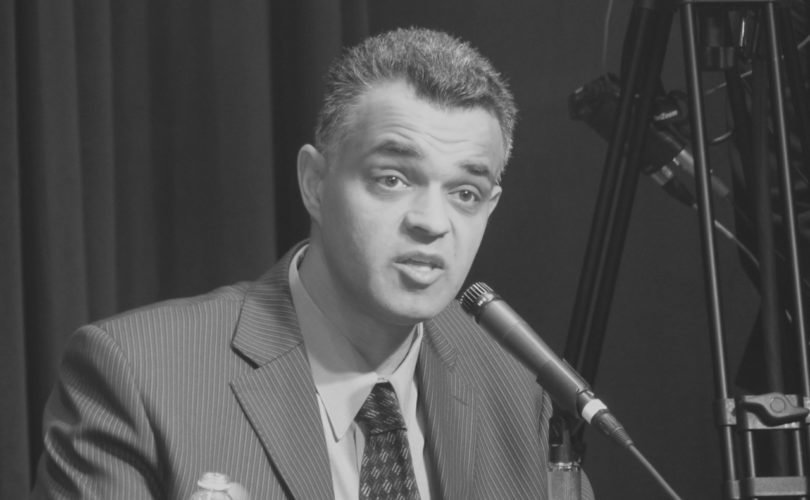 WASHINGTON, D.C., April 24, 2015 (LifeSiteNews.com) — Six days before the Supreme Court hears what may be the definitive marriage case for the United States of America, LifeSiteNews Editor-in-Chief John-Henry Westen and three other marriage experts described why the Court should rule in favor of marriage.

Speaking on a panel sponsored by the Family Research Council (FRC), Westen joined FRC Senior Fellow for Legal Studies Cathy Ruse — who moderated the three-person panel – as well as attorney Gene Schaerr and Father Paul Sullins, a professor from Catholic University, to analyze the legal, social science, and cultural implications of redefining marriage.

All of the panelists spoke from their area of expertise. Schaerr, who has represented Utah in its defense of marriage, said the Court should decide for marriage on the basis of the 2014 Windsor decision that at times emphasized state rights on marriage. According to Schaerr, the Supreme Court said last year that a one-size fits all solution to marriage was not constitutional — and, thus, says Schaerr, it should use that same logic in deciding the cases it is hearing on Tuesday.

Schaerr said that there is no right to same-sex “marriage” in the Constitution. He argued that everyone has the right to marry someone of the opposite sex.

Father Sullins, a scholar and researcher at Catholic University, spoke of research done by both sides of the marriage issue on outcomes for children. Sullins noted flaws in the arguments by marriage redefiners, and said that the data showing one-man, one-woman relationships are better comes from better research based upon substantial data gathered by the U.S. federal government. He told LifeSiteNews that part of the reason research from social conservatives is better is because those who support redefining marriage often do not use properly randomized samples. Instead, they often go to very specific demographics that will fit their pre-existing conclusions.

Westen described the error many judges have made in assuming “animus” against gay sexual relations is synonymous with animus against people with same-sex attractions. He cited evidence of harms to same-sex couples — including, but not limited to, HIV/AIDS, shorter average life spans, and higher breast cancer rates for lesbians — and said that proponents of marriage must focus their arguments on loving those with same-sex attraction.

According to Westen, America must once again speak from the pulpit on same-sex “marriage.” Pointing to gay activists who ask why two people who love each other can't be “married,” he said love must be shown by religious, political, and cultural leaders if the course of same-sex “marriage” is to be reversed in America.

Additionally, Westen described his concern that America is heading down a path of religious persecution over the marriage issue, as has happened in other nations. In Canada, noted Westen, educators are forced to promote same-sex relationships as equal to all other relationships — even in private schools.

That persecution can only be avoided if supporters of marriage are able to effectively convince the public that rather than coming from a position of hate, or bigotry, they are coming from a position of love, said Westen. He said that if the public and politicians believe racist-like bigotry is the reason for opposition to same-sex relationships, then it will be easy to justify laws like those seen around America that have threatened the livelihoods of many Christians.