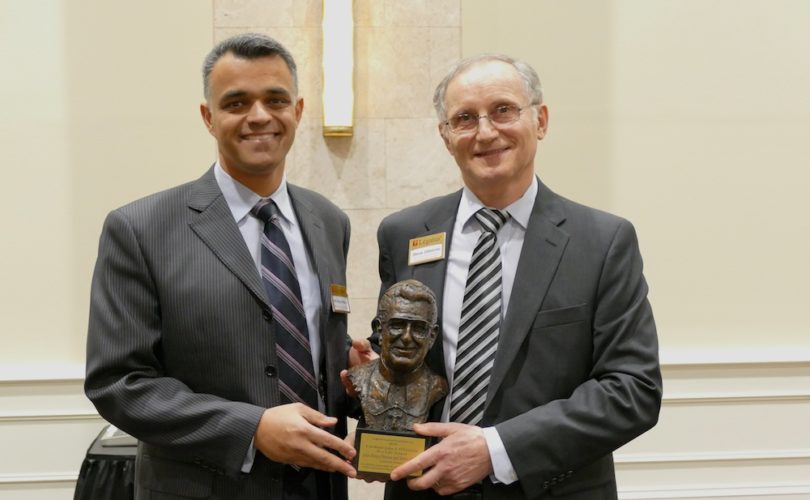 ORLANDO, Florida, January 29, 2016 (LifeSiteNews) — When a lay organization of influential Catholic business leaders in North America instituted an annual pro-life award 14 years ago to recognize individuals who have “demonstrated courageous Christian witness in defending the sanctity of all human life,” little did it know that the award would eventually be given to a former president, cardinals, and numerous heavy weight champions of the pro-life movement, all fighting in their unique ways to end abortion and bring justice to preborn babies.

This afternoon Legatus added to its list of recipients of the prestigious Cardinal John J. O’Connor Pro-Life Award, giving it to LifeSiteNews’ own co-founders, Managing Director Steve Jalsevac and Editor-in-Chief John-Henry Westen, for their service to life through the creation and daily operation of the world’s most visited online pro-life news service.

Last year LifeSiteNews (LSN) spread the truth about life and family to 30 million unique visitors who clicked through 60 million pages.

“The work of LifeSiteNews is a mission to serve all the pro-life and pro-family groups and leaders in the world, and a mission, above all, to serve the will of God.” –  Steve Jalsevac

“Steve and John-Henry are to be congratulated for their work in co-founding 19 years ago a powerful pro-life news service devoted to the belief that human life is a gift from God to be cherished and protected,” Jim Hughes, president of Campaign Life Coalition and member of the Legatus awards committee, told LifeSiteNews.

“These men are tested warriors in the battle for a culture of life. Their reports show that they are learned, articulate, and persuasive in fighting for life and family. They are an outstanding witness to life and are to be congratulated and thanked for their leadership in pro-life news and in the pro-life movement worldwide,” he said.

Hughes said that LifeSiteNews, since it’s humble beginning in 1997 in the Toronto offices of Campaign Life Coalition (CLC), has through “trial and error and a whole lot of prayer” managed to “unlock the real potential of the internet in the service of life.”

“There’s a lot of junk on the internet, but LifeSiteNews acts as a powerful leveler in the competition to get out the pro-life message. One cannot overstate the extremely positive effects of having a truly pro-life internet news service. It not only serves as a sanctuary for news-hungry pro-lifers, offering them a healthy and legitimate alternative to the often liberally dominated mainstream, but, more importantly, it educates people who are not part of the core group, giving them a true perspective of what is happening globally on the life-and-family front,” he said.

Hughes said that when it was first decided in the CLC offices to undertake the, at-the-time, monumental task of taking a pro-life news perspective online, the job was given to the care of the two employees everyone thought could do it best, Steve and John-Henry. “Campaign Life Coalition’s donors and supporters had full confidence that this was the way to go and have never looked back since,” Hughes said.

LifeSiteNews has since become a separate incorporated non-profit organization in both the U.S. and Canada and it operates both an English and Spanish news website.

Hughes said that one way LifeSiteNews effects real change is by inspiring and encouraging readers to learn about an issue and then to take action.

“One of the best aspects of LifeSiteNews is that at the conclusion of an important report or investigative article, readers are often provided with the contact info of the subjects of the report so they can express to them their concern, approval, or disappointment. This provides a healthy outlet for people who feel they must take action after reading about a situation,” he said.

In his acceptance speech, Jalsevac said LifeSiteNews is all about service. “Both John-Henry and I feel we are accepting this award on behalf of our whole team. We call ourselves the ‘LifeSite family.’ We also call our work a mission – a mission to especially serve all the pro-life and pro-family groups and leaders in the world, and a mission, above all, to serve the will of God.”

Jalsevac thanked his wife Bonnie for being a rock of support. “I must confess that I could not possibly have continued this LifeSite and other pro-life work for over 35 years, and done it with such intensity and endured the constant financial insecurity and the many unexpected burdens, disappointments, intimidation lawsuits  and more, without the full support of my wonderful wife Bonnie. Thank you, my Love. In many ways this award is even more for you than for me. That is a reality,” he said.

Jalsevac also thanked LifeSiteNews co-founder Westen for “being such an inspiring and exceptionally capable partner” and CLC’s Hughes for the “support, encouragement and the freedom that you gave us to do what we knew we had to do,” adding that “LifeSite would never have existed without you.”

In his acceptance speech, Westen called receiving the award a “testimony to the awesome generosity and mercy of God even to those who have abandoned Him.”

“You see, both Steve and I left the practice of faith in our youth. We were on the other side, even of the culture of life. He was a member of Zero Population Growth and I lived a life of hedonism. But God in His mercy brought us back to Himself and has since showered us with blessings, crosses too, naturally, but many blessings,” he said.

Westen thanked his wife Dianne for being a strong support. “For me, none of this would be possible without my faithful wife Dianne, who left her teaching career so she could home school our 8 children, who converted to the Catholic faith with our third child after the Bible convinced her of the truth of Christ’s True Presence in the Eucharist, who was open to life even after three miscarriages, who permits me to go and speak wherever I’m called all over the world and bears the long hours needed for this mission, and who has never balked at the hardships that have come with it.”

The January 28 award ceremony was held at the annual Legatus Summit in Orlando, Florida. The Summit’s theme was: “No More Comfortable Catholicism.”

The awards were bestowed by former Domino’s Pizza owner Thomas Monaghan, founder of Legatus and Ave Maria University. Also receiving the award was Dr. Theresa Deisher, a genetic engineer and president of Sound Choice Pharmaceutical Institute, who discovered stem cells in adults and has worked on their potential therapeutic uses, and Princeton Law Professor Robert P. George, founder of American Principles Project, the Witherspoon Institute, and National Organization for Marriage.