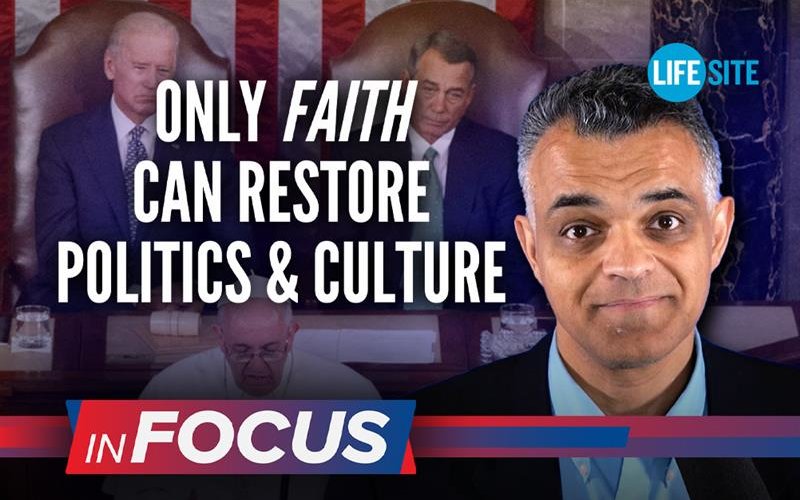 (LifeSiteNews) — On this week’s episode of LifeSiteNews: InFocus, John-Henry Westen discusses the future of conservatism, difficulties and persecution facing Christians in the Middle East, and the ongoing struggle by faithful Catholics within the Church for the right to worship God at the Latin Mass.

“Faith has to be there in politics, otherwise your politics is going absolutely nowhere,” John-Henry says in his opening remarks. “You exclude faith from any movement you want, including the pro-life movement, and you will get nowhere.”

Included in this week’s episode is the full version of LifeSite’s exclusive interview with Yoram Hazony, Israeli author and chairman of the Edmund Burke Foundation, in which he tells LifeSiteNews U.S. Bureau Chief Doug Mainwaring that “biblical Christianity” is the only way America can save itself from the scourge of “woke neo-Marxism.”

Also covered this week: Pope Francis’s trip to Kazakhstan, the largely ignored persecution of Christians worldwide, a pilgrimage of Catholics from Arlington, Virginia, to Washington, D.C. calling on the respective bishops of those dioceses to remove restrictions on the Traditional Latin Mass, and a replay of LifeSiteNews’s first “Good News Friday” feature on LSNTV.

Mother Miriam then closes out the episode with a brief reflection on reverencing Christ in the Eucharist and the importance of not eating and drinking condemnation on ourselves.

“It is time to stand for your faith, because without faith, all political efforts in anything will not succeed. The only way to change the culture is with faith,” John-Henry concludes.

LifeSiteNews: InFocus is available on YouTube, Rumble, Banned, and right here on LifeSiteNews.

We’ve also created a special email list for the show so that we can notify you every week when we post a new episode. Sign up now by clicking here.