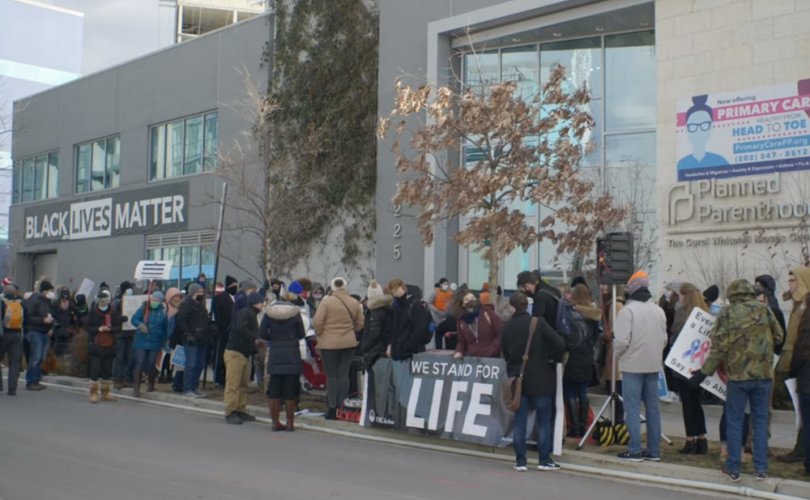 WASHINGTON, D.C., January 29, 2021 (LifeSiteNews) — Today, despite the cancellation of the official March for Life as it normally exists, and against the bitter cold, LifeSiteNews headed to Washington, D.C. to join “thousands of people” who had “come from all over the country to make their voices heard,” LifeSiteNews’s Jim Hale said.

A large crowd was gathered peacefully outside D.C.’s Planned Parenthood, some standing with signs supporting life, while others could be seen kneeling and praying with rosaries in hand.

Fr. Greg Shaffer of Assumption Church in southeast D.C. addressed the crowd. Shaffer lauded those gathered, saying that even though the march was canceled, “Here you are doing something for life … we have to be here for life.” He noted the fruits of coming to pray and demonstrate for the pro-life cause, informing his listeners that “hundreds of these places (Planned Parenthood facilities) have closed by praying.”

Hale agreed, advising that “(i)t is more important to support the pro-life movement, now more than ever, because miracles are still happening in front of these abortion mills every single day.”

Speaking with LifeSite, Monica Miller, author of Abandoned: Untold stories of the abortion wars, said, “Abortion is not virtual. Abortion is real. The killing of the unborn is a real thing. Our presence here also has to be real; our witness has to be true, and I just talked to a father of a baby that’s scheduled for abortion. I said we will help you financially because he said that is his issue. He actually texted the girlfriend, ‘Come out, we can have this baby.’” This would not have been possible if people had not come out to march in person.

Noting the struggle the pro-life movement faces with the Joe Biden presidency, Miller encouraged listeners “to triple our efforts, especially in light of what we might be facing with a Biden administration. So we gather here with our signs, reaching out to the moms who are going into this abortion clinic, and we will just keep going.”

Matt Britton, board member at the pro-life organization 40 Days for Life, told LifeSite why he thinks it is so important to have a physical presence at the March for Life. “Last fall, when I came here … there was a young woman on the telephone talking to the father of her unborn baby. That father was begging her to go in here (Planned Parenthood), and she said, ‘I can’t go in there again.’ It turned out she had an abortion when she was 17 years old.”

“Dr. Haywood Robinson, a former abortionist who came to Christ, who’s our (40 Days for Life) medical director … walked up to her and came back 60 seconds later and said, ‘Praise be to God, she’s chosen life.’ And that’s why I’m here, and that’s why I’ll keep coming back. It’s why you’re here and all these people are here.”

Byrne implored Catholics to “pray with me for the change of heart of President Biden, because he is a little ‘c’ Catholic and we need to make it a big ‘C,’ so that he defends life from the moment of conception to natural death.”

Describing her own struggle with current pro-abortion legislation, she said, “I have to say I have felt discouraged. Then I say, wait a second — God is in charge, not me.”

Many ordinary Americans, who had come from around the country, disclosed their reasons for making the journey to March for Life. A group of young Christian men who traveled from Michigan told LifeSite that, after seeing that the march was canceled and “it was going to be virtual, and we said ‘no, we’re going.’ We texted everybody and said, ‘let’s go, we’re not missing it,’ … we need it more now than ever.”

Another demonstrator, Ella Maulding, of Jackson, Mississippi, said she was disturbed by “the fact that people think that abortion is health care and people think it’s a human right, just how far society has strayed.” Moved to make a real change, she “wanted to come do something about it and show people that abortion is murder.”

“It’s so important to be there in physical presence and with other people because if they see you together it’s harder to refute what you’re saying.”