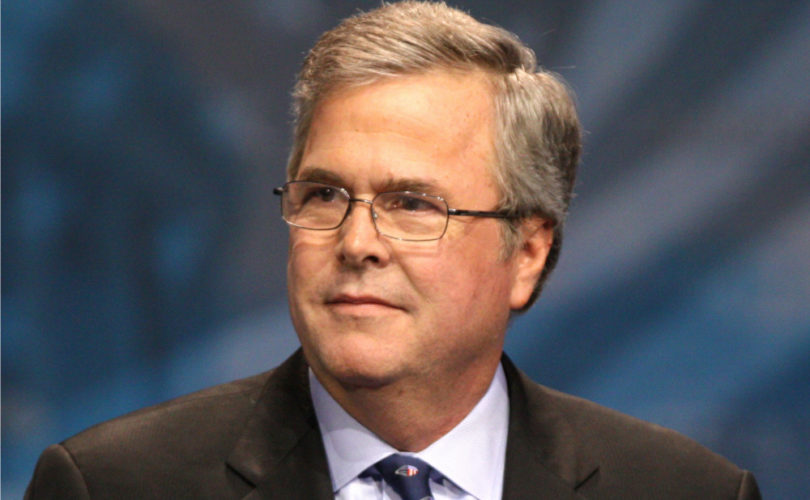 The moderators of the first Republican debate last night in Cleveland devoted one segment to “social issues” – and the lead question cited one of our stories.

Megyn Kelly asked former Florida Gov. Jeb Bush about his nearly five-year stint as a board director of Bloomberg Philanthropies, which announced a multi-million dollar partnership with Planned Parenthood while Bush was on the board.

“Until late 2014, right before you started your campaign, you sat on the board of a Bloomberg charity that quite publicly gave tens of millions of dollars to Planned Parenthood, while you were a director. How could you not know about these well-publicized donations, and if you did know, how could you help a charity so openly committed to abortion rights?” she asked.

“I joined the Bloomberg foundation because of Mike Bloomberg’s shared commitment for meaningful education reform,” Bush replied. “That’s why I was on it.”

Both Bush and Bloomberg have confirmed their support for Common Core education standards, the unpopular federal guidelines that affect even homeschoolers who opted out of public education to avoid the curriculum.

“We never had a debate about the budget. It was presented, and we approved it. Not item-by-item,” he said.

When asked if he knew about the philanthropies' support for Planned Parenthood, he said, “I didn't know, but it doesn't matter.”

“I was working on this board because of the education,” he said.

The Bloomberg Philanthropies' grants to global abortion provider Marie Stopes International, as well as EngenderHealth, were part of the charity's 990 form filed with the IRS for the year 2013.

The National Center for Nonprofit Boards says that directors as “ultimately accountable” for the actions of their philanthropies.

Bush then pivoted to his pro-life accomplishments as governor of Florida, from 1999 to 2007.

“I created a culture of life in our state,” he said, citing his opposition to Planned Parenthood funding, his support for funding crisis pregnancy centers, and passing pro-life legislation.

“We did parental notification laws. We ended partial birth abortion. We did all of this,” he said. “And we were the first state to do a 'choose life' license plate.”

“And I did this not just as it related to unborn babies, I did it at the end-of-life issues, as well,” he said, citing his intervention in the Terri Schiavo case.