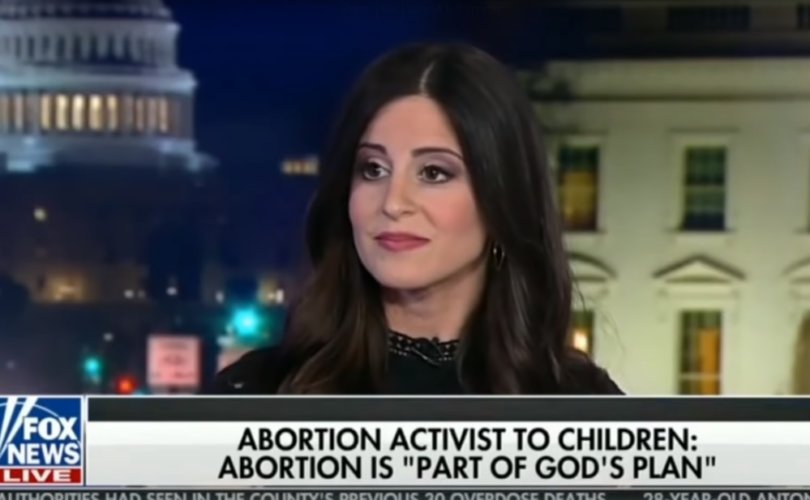 NEW YORK, January 18, 2019 (LifeSiteNews) – Pro-abortion extremism is going to keep the Democrats out of the White House, a leading pro-life activist told a Fox News host.

Lila Rose, founder and president of Live Action, a team of pro-life investigative journalists, told Tucker Carlson this week that the Democratic Party is “in lockstep with abortion extremists.”

Carlson interviewed Rose as part of his commentary on a shocking video of “Shout Your Abortion” activist Amelia Bonow promoting abortion to children. Bonow described her abortion to children as being like a “really crappy dentist appointment” and told them that abortion was “all part of God's plan.”

“[The Democrats] are going to lose every time if they continue to keep with the extremists on this, with the Amelia Bonows shouting their abortion, with the activists saying 'abortion through all nine months, late term abortion is great, paid for by the taxpayers,'” Rose said.

“The vast majority of Americans, poll after poll, want abortion restrictions. That's a fact, and the Democrats will lose on that.”

Rose told Carlson that Bonow's video, published on a children's YouTube channel, was a “piece of propaganda.” She explained that the “HiHo Kids” channel peddles transgenderism and other adult issues to children.

“There's other videos trying to get eight-year-olds, nine-year-olds, ten-year-olds to be comfortable with things that are harmful,” she said.

Rose said that Amelia Bonow is a “wounded person” who is trying to justify her abortion and validate herself by talking about it to eight-year-olds.

“There's really only two paths that you can take [after] abortion,” Rose said.

“And then you go around like Amelia Bonow and try to get more women to have abortions. You try to legitimize it even to children. That's what's happening.”

Carlson said promoting abortion, which is “clearly killing,” as a positive act to children is something new.

“You wouldn't have seen anything like this ten years ago,” he remarked.

Rose indicated that indoctrinating kids with lies about abortion is a sign of “desperation.”

“I think it's the desperation of the pro-abortion movement right now,” the Live Action president  told Carlson.

“They've lost, Tucker,” she continued. “Science shows us when life begins. Life begins at the moment of conception. There's a unique individual human life, genetically distinct from the mother, [who] just needs time and nourishment to grow.”

“We have thousands, now, of pregnancy and health centers, pro bono, providing care to mothers, young mothers, families and children, in the pro-life movement,” she said.

“There's really no argument anymore, no justification anymore for why we need abortion in this country.”