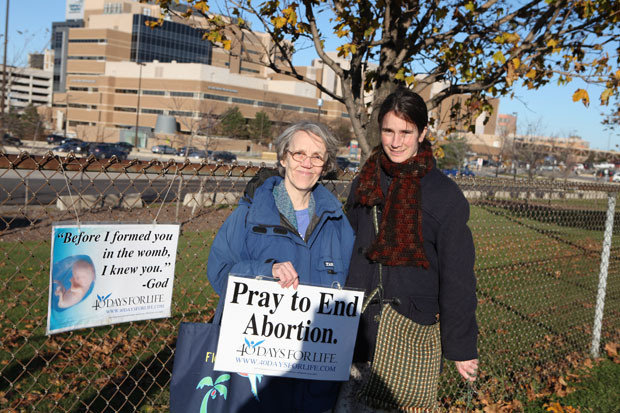 At Osgoode Hall, the all-female Ontario Court of Appeal heard submissions from Gibbons’ defence counsels on why her 2011 conviction on a charge of disobeying a court order should be overturned. In the provincial court at College Park, Wagner appeared for a scheduled bail hearing following her arrest at the Bloor West Village Women’s Clinic abortion site just before Christmas.

The Gibbons case harkened back to April 12, 2011, when Justice Mara Beth Greene found Gibbons guilty after she dismissed an application for a stay based on abuse of process by the Crown. Greene then sentenced her to one day in jail on top of over two years she had spent in pre-trial custody. The charge had been laid, and Gibbons arrested, in January 2009.

Friday morning, defence counsels Daniel Santoro and Nicolas Rouleau put forth three main arguments for their appeal, which had been moved up to the Ontario Court of Appeal after being unsuccessful at the Superior Court level. Their arguments centered on three main points – abuse of process by the Crown, an improper delegation of legislative powers by the federal government to the legislature of Ontario, and the unconstitutionality of Section of 127 of the Criminal Code (regarding breaches of court orders).

On the first point, Santoro singled out the fact that a 1994 “temporary” civil court injunction limiting pro-life activity outside certain Toronto abortion sites was still being enforced by the province and Crown attorneys almost two decades later, with no moves made to either drop it or make it permanent. This, he suggested, is an abuse of process.

“The injunction was meant to be temporary,” Santoro emphasized, pointing out that lower court justices said the conduct on the part of the Crown was “troubling” and displayed a “laissez faire” attitude. In addition, Santoro said Gibbons was not formally represented by legal counsel at the time of the enactment of the injunction, as her previous lawyer, Peter Jervis, had removed himself. Thus, she was not bound by the injunction’s terms.

The failure of the Crown in the performance of its duties in these matters, said Santoro, meant it couldn’t then come to the courts asking for enforcement of the injunction. He added Gibbons should have been brought before a civil court.

Rouleau argued the point that Section 127 is unconstitutional. The statute has no public purpose, he said, and Parliament has improperly given the province the power to decide which breaches of court orders are criminal. This creates an arbitrary “hierarchy” of court orders as Parliament improperly applies the provincial legislature’s decisions on the criminality of breaches.

Santoro closed by submitting that Section 127 is “arbitrary, over-broad and disproportionate.” The arbitrariness arises from the fact a serious breach of a court order can be treated non-criminally and vice versa, he said. This creates divergent applications of criminal law.

Section 127 is also over-broad, Santoro continued, as it criminalizes any breach of a court order and is not just a codification of civil contempt. Meanwhile, the statute is also disproportionate as it can criminalize a minor offence.

In her rebuttal, Crown counsel Susan Magotiaux said there has to be a high standard of misconduct – oppressive or vexatious – to constitute abuse. She argued Jervis did not formally remove himself as Gibbons’ counsel in 1994 and so was still her counsel of record.

She added the Crown should not be held liable for the fact that a temporary injunction is still being enforced, and criminally at that, as there is evidence to suggest all parties have been content with the pace of events, the Crown has not delayed the matter and it has not litigated it maliciously.

Magotiaux said Gibbons has had avenues at her disposal if she wishes to challenge the injunction, including the right of appeal and the ability to apply to have it dismissed. On the improper governmental delegation of power, she said Section 127 is “a constitutionally sound exercise in criminal law” and there is permissible overlap in the jurisdictions of various levels of government. This is co-operative federalism, she said.

Wading into the realm of clichés, Magotiaux called Section 127 a vehicle for maintaining public order and confidence in the administration of justice, ensuring the integrity of the legal system, preventing affronts to the courts and society and protecting against anarchy.

Finally, the rule of law is the rule of law in all its forms, she said. All laws are obliged to be followed and one can’t say one law is “trivial” and another is not. Laws are “products of our system of government” and a “parliamentary policy choice.” Section 127 itself allows for flexibility and “accounts for a proportional response to a given set of facts.”

At Mary Wagner`s bail hearing, supporter John Bulsza reported that her lawyer in an ongoing appeal appeared, but announced he will not be retained as her counsel for coming proceedings on charges of breaching probation and mischief. Dr. Charles Lugosi told the court of the appeal and tried to file a notice of it with the court, but that was denied by the justice of the peace.

Lugosi added Wagner has chosen to not have counsel and plans to remain silent throughout the proceedings in solidarity with unborn human beings victimized by abortion. He then asked that she be allowed to read aloud a letter, after which she planned to fall silent. The justice of the peace allowed the request.

“What is at issue here is that unborn children are being slaughtered systematically with the complicity of the judicial system,” said Wagner in part. “I have sought the best way to respond to these current charges – in other words, the best way I can stand in defence of the children in the womb.”

“They have no voice to defend themselves. They are at the mercy of a judicial system that chooses to ignore them. I choose to have no lawyer represent me. The children in the womb are silent and, from this point on, I will stand for them here as their silent representative and friend.”

If Wagner continues to remain silent and unrepresented by legal counsel, the courts will enter a plea of not guilty on her behalf and a trial will proceed with only Crown witnesses and submissions. If she is found guilty, only Crown submissions on sentencing will be heard as well.

Wagner was put over for her next appearance to February 5 at 10 a.m. in Room 505 of College Park court.

Meanwhile, reasons are still being awaited regarding the decisions of Justice Fergus O’Donnell in her trial that concluded last June and which are the basis of the current appeal. A “housekeeping” hearing regarding that appeal will be heard in the Superior Court of Justice at 361 University Avenue in Toronto the morning of January 23.

And this Sunday, January 18 marks the Canadian premiere in English of the Polish documentary film, Not About Mary Wagner. Admission is free and the screening is to take place beginning at 3 p.m. at the John Paul II Cultural Centre, 4300 Cawthra Road in Mississauga. A screening of Eugenics, a related documentary by the same film maker, Grzegorz Braun, will follow at 4:30 p.m.