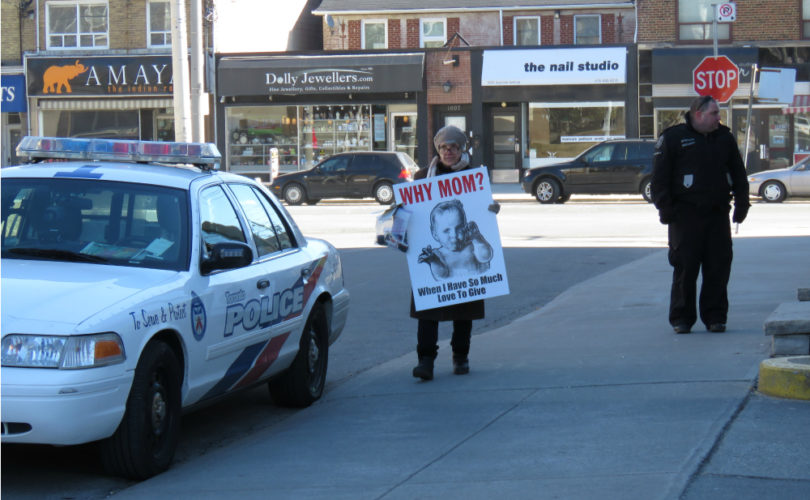 Her lawyer Daniel Santoro has asked the Crown to produce disclosures of its evidence against Gibbons before this next court appearance.

He pointed out in a telephone interview with LifeSiteNews that following Gibbons’ last two arrests under similar circumstances, the Crown withdrew charges.

The 67-year-old Gibbons was arrested September 2 in front of the Morgentaler abortion facility on 727 Hillsdale Avenue and subsequently charged with disobeying a court order and obstructing a peace officer.

At the time of her arrest, Gibbons had been walking back and forth outside the abortion center for about two hours, holding pamphlets, a replica of a ten-week-old child in utero and her now-familiar sign with a picture of a crying baby and the words “Why Mom? When I have so much love to give.”

Gibbons said nothing to the law enforcement officers until she was placed under arrest and handcuffed, at which point she said to the sheriff: “You arrest me while allowing the murder of babies? You have blood on your hands.”

The injunction, which has been permanent since 1999, prohibits certain activities – such as “impeding, interfering with, blocking and obstructing” women entering the facility – within 500 feet of the entrance of the Morgentaler abortion center, effectively banning life-saving activities such as sidewalk counseling within this “bubble zone.”

Despite this, Gibbons has repeatedly returned both the Morgentaler and other abortion facilities in Toronto since 2000, to peacefully witness to women and unborn children immediately threatened by the violence of abortion.

Because of her peaceful action, Gibbons has been arrested numerous times and has spent ten years and seven months in jail – although she has now added one more week to that total.

Gibbons refuses to speak in court or to accept bail conditions in solidarity with the unborn children, who have no voice.

Her next appearance in court is September 22.