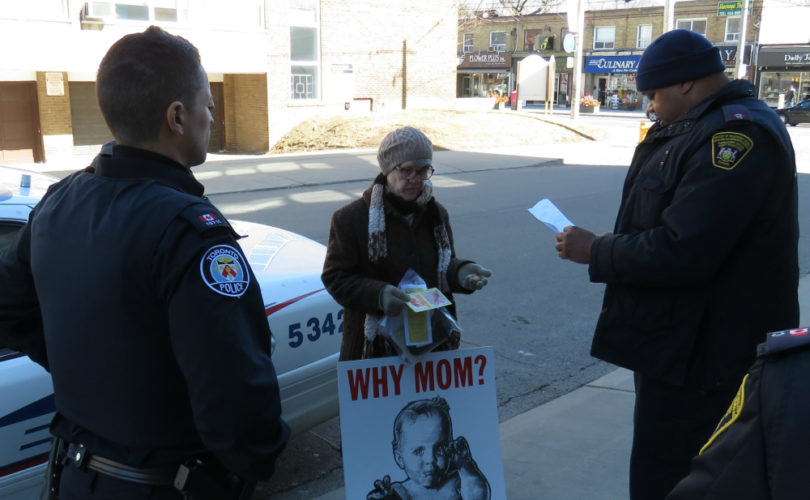 TORONTO, March 25, 2015 (LifeSiteNews.com) – Pro-life prisoner of conscience Linda Gibbons refused bail conditions today and will remain in custody at least until next Tuesday, March 31, when disclosures on evidence from the Crown will be put to the court.

Lawyer Daniel Santoro will ask then, as he did today, that the charges against Gibbons be dropped, he told LifeSiteNews. The Crown had dropped the charges November 12, 2014, following Gibbons’s last arrest on August 7 of that year.

Buchanan told Gibbons she must abide by certain conditions in order to be released. “I understand that may be difficult for you, but that’s your choice.”

The 67-year-old pro-life activist stood in the dock without speaking while the conditions were read; including agreeing to return to court for her next hearing, and agreeing to stay 500 metres away from all abortion facilities in Toronto.

John Bulsza of London, who witnessed Gibbons’s arrest Tuesday and was at court today, said Gibbons has spent nearly 11 years in jail since 1994.

That was the year Bob Rae’s NDP government brought in an injunction prohibiting pro-life activities within a certain distance of abortion clinics. Gibbons did not recognize the injunction as having force to stop her sidewalk counseling, and was arrested soon after.

“She’s our heroine,” Bulsza said. “She’s a prisoner of conscience.”

Gibbons is usually charged with disobeying the court’s lawful order. Pro-life observers say that authorities avoid charging her with breeching the 1994 injunction, because she could then challenge its constitutionality.

Mary Burnie, a longtime pro-life activist and close friend of Gibbons, urged people to show up for Gibbons’s court appearances in solidarity with her, and with the unborn children she is trying to save when arrested.

Gibbons’s next appearance at the College Park courthouse is scheduled for Tuesday, March 31, courtroom 505, at 10:00 a.m.