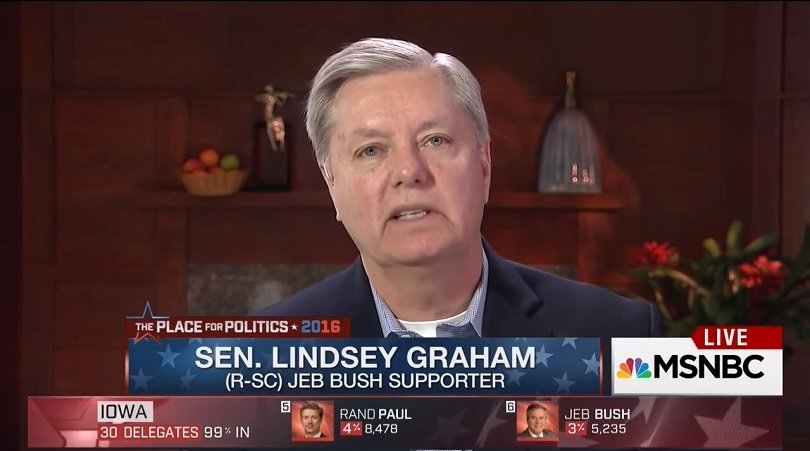 WASHINGTON, D.C., February 2, 2016 (LifeSiteNews) – A surrogate for Jeb Bush attacked two of the candidates who beat him in last night's Iowa caucus for being too pro-life.

On today's “Morning Joe” program on MSNBC, Sen. Lindsey Graham, R-SC, told Mike Barnicle that Ted Cruz and Marco Rubio are unelectable in the fall, because they do not make enough exceptions for abortion.

“If a woman is raped in Ted Cruz’s world, she’s going to have to carry the baby of the rapist. I'm pro-life, but I won't go there. I think that's hard to sell with young women,” said Graham, who gave up his own presidential ambitions after failing to crack the top tier of GOP hopefuls.

But the South Carolina Republican said that Cruz has only a “one-in-10” chance of defeating any Democratic candidate in the fall. “The only person who'd do worse than Ted is Trump.”

Graham excoriated Rubio for having “no exception for rape and incest.”

“I may be wrong, and I hope I'm wrong, but I think it’s going to be very hard to grow the party among women if you’re gonna tell young women, ‘If you get raped, you’re gotta carry the child of the rapist.’ Most pro-life people don't go there,” he said.

The attack is the culmination of a strategy the fledgling Bush campaign tested last fall.

The infighting, especially demonizing a fellow Republican as too supportive of the right to life, chafed pro-life observers.

“It is almost hard to believe that the establishment of the Republican Party would stoop so low as to use Planned Parenthood-style fearmongering attacks to attack pro-life conservative candidates,” said Penny Nance, the president of Concerned Women for America, the nation’s largest women’s public policy organization. “Comments like these are not only irresponsible, but harmful to the pro-life cause and movement in America.”

The Right to Rise PAC previewed two videos for a focus group of New Hampshire voters on October 28, one of them portraying Rubio as too staunch a supporter for the unborn following his strong pro-life remarks at a Republican presidential debate.

The PAC, headed by Republican moderate Mike Murphy, plans to spend as much as $20 million airing attack ads against Rubio in New Hampshire.

Rubio's campaign responded to the planned attack last fall. “Marco believes that all life is worthy of protection, and is proud of his 100 percent pro-life record,” Brooke Sammon, a spokeswoman for Marco Rubio, told LifeSiteNews exclusively at the time.

“I like Marco, but he's now turned hard-Right,” Graham said, chiding his colleague for abandoning the Gang of Eight immigration bill that the two worked on together in hopes of granting amnesty to at least 11 million illegal immigrants.

“I don’t know how this movie ends, but we’re going the wrong direction with women and Hispanics, in my view,” he said.

Graham felt that Jeb Bush, who finished sixth in the Iowa caucus with less than three percent of the vote, would be successful in New Hampshire if he is able “to win his lane” among Republican centrists favored by the GOP donor class.

The Bush campaign spent more than $14 million on television but won only 5,238 votes — a cost of approximately $2,845 per vote.

The New Hampshire primary takes place one week from today.