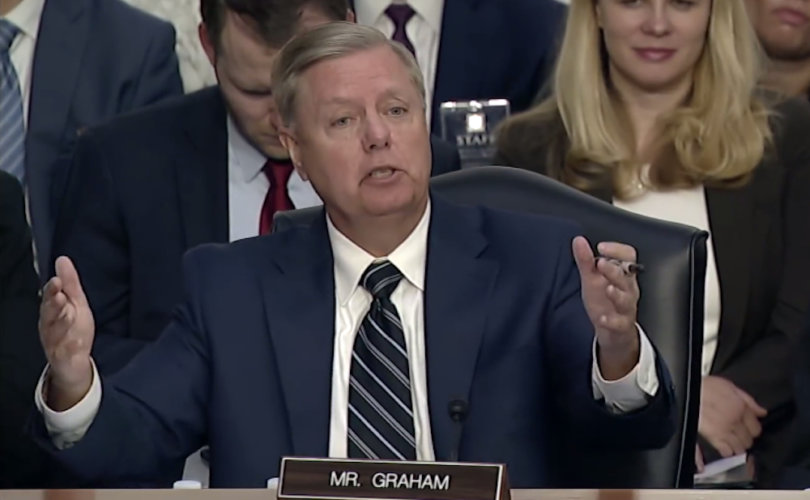 WASHINGTON, D.C. (LifeSiteNews) — Republican U.S. Sen. Lindsey Graham of South Carolina reiterated his opposition to a Democrat bill to codify forced recognition of same-sex “marriage” and open the door to federal recognition of polygamy, suggesting it was a violation of states’ rightful prerogatives and an attempt to distract from Democrats’ political woes.

Forty-seven House Republicans joined every House Democrat in voting to pass it, with the blessing of House Republican leaders Kevin McCarthy and Steve Scalise, and Senate Republican leader Mitch McConnell has declined to stake out a public position on the legislation until Democrat majority leader Chuck Schumer announces a decision on bringing it to the floor.

So far, at least four Republican senators have either committed to or implied supporting the bill: Susan Collins, Lisa Murkowski, Thom Tillis, and Rob Portman. Democrats need a total of 10 GOP defections to clear the Senate’s 60-vote filibuster threshold; Sen. Ron Johnson of Wisconsin had been a surprising fifth until he began to backtrack last week.

“I’ve been consistent. I think states should decide the issue of marriage and states should decide the issue of abortion,” Graham said during a recent CNN panel, The >Epoch Times reported. “I have respect for South Carolina. South Carolina voters here I trust to define marriage and to deal with [the] issue of abortion and not nine people on the court. That’s my view.”

Republican Rep. Jody Hice of Georgia was more forceful in a recent Washington Stand op-ed. “The last thing we should be doing is redefining [marriage] in opposition to all common sense and decency,” he wrote. “Marriage is rightly the union of one man and one woman, and that wouldn’t change even if a bill saying otherwise passed through Congress unanimously. According to my faith, and the faiths of countless other Americans, marriage is a holy institution ordained by God. God defines what marriage is.”

“The Democrats’ partisan plan to codify the disastrous Obergefell decision hasn’t succeeded quite yet,” Hice continued. “I’m saddened that so many Republicans abandoned pro-family values to support the legislation in the House, but there’s still a good chance of stopping it in the Senate. The vote will come down to the wire, and every senator’s decision will matter. In this political crisis, it’s the duty of every constituent to call up their senators and urge them to reject the so-called “Respect for Marriage Act.”

Republican Sen. Ted Cruz of Texas, who made headlines in July for blasting the 2015 Supreme Court ruling that forced nationwide recognition of same-sex “marriage” as “clearly wrong,” told reporters this week that HR 8404 was a “pure political messaging bill. The Supreme Court said repeatedly and unequivocally that it was not going to revisit Obergefell. This is the Democrats playing politics and, frankly, trying to change the subject from Biden’s failed record of inflation, crime and chaos of the southern border.”

Democrat Sen. Tammy Baldwin of Wisconsin, who has been heading Democrat outreach to Republican senators on the bill, claimed late last month to have secured enough additional GOP votes to pass it, though its prospects have since begun to appear less certain.

Last week, Axios quoted Republican Sen. Mitt Romney of Utah, who had previously been noncommittal, as expressing reservations about the bill’s religious liberty ramifications, and Tillis as saying that he does not believe the bill will clear the Senate “in its current form,” and that an amended version would “have to take another trip back over to the House.”

Schumer now says he will schedule a vote on the bill for September; it is unknown if this means he has determined it has enough GOP support for passage.