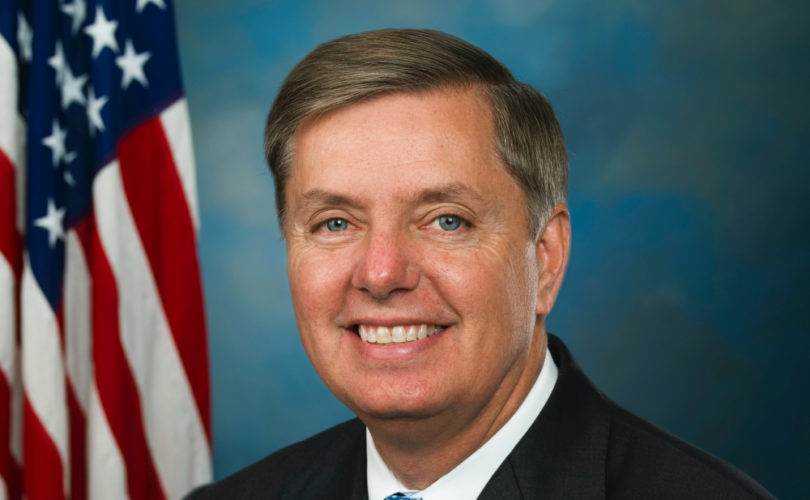 WASHINGTON, D.C., June 11, 2015 (LifeSiteNews) — The sponsor of the Senate's 20-week ban told LifeSiteNews that when it comes to laws about aborting children conceived from rape, “I'm going to leave that to the family, to the mother.”

LifeSiteNews asked Graham about this comment after the press conference, noting that his bill — which bans abortions after 20 weeks' gestation unless the unborn child is conceived from rape or incest, and if the mother's life is in danger — has been criticized by some pro-life activists for the rape exception.

“You said we're going to talk about this issue 'in a fair way,'” LifeSiteNews said. “Do you have anything to say to pro-life activists who say that by allowing abortion for children conceived from rape, you're devaluing their pain?”

“I've always had exceptions for rape, incest, and life of the mother,” said Graham, who appeared to interpret the question as reflecting criticisms from the abortion industry.

“These are pro-life activists who say that allowing children conceived from rape [to be aborted] is devaluing their pain, devalues their humanness,” clarified LifeSiteNews.

“Everything's a balancing test,” said the senator. “A balancing of interests. In a situation of rape, I'm going to leave that to the family, to the mother.”

Last week, when he announced his run for president, the senator said, “I will be a champion of social conservative values without apology, or animosity,” reflecting what he had previously told a Boston radio show about how he is “for traditional marriage without animosity.”

He repeated the word “animosity” again Thursday, saying, “This is about the baby, without animosity towards anybody else. … We're going to have a long debate out there. It will be thoughtful, and it will be genuine.”

Susan B. Anthony List president Marjorie Dannenfelser, who moderated the press conference and whose organization has been a prominent backer of the 20-week ban in its current form, said that she believes that rape exceptions are “abominable.”

“I agree. I agree that the rape exception is abominable,” she told LifeSiteNews. “I also know that with it, we were able to move forward, and we have the potential of saving 15,000 to 18,000 children a year. No one should give up or give over a rape exception unless there is simply no chance of saving those other children. I really believe that.”

“I also think that — look at this bill, it's a 20-week bill. We left out every other child. We've excluded, and excepted, most children from this. So by the same argument, I reject that, but I also know that we've found a sweet spot that we can get common ground on, and it's a place where the country is, and it's a place that we can actually get the legislation through.”

Most pro-life leaders have publicly accepted that the 20-week ban is highly unlikely to become law prior to President Obama's departure from office. Obama has promised to veto the bill, and with 54 GOP senators, Graham would need at least six Democrats to support the late-term abortion ban just to get it to the president's desk. It would take 66 votes to overturn a veto by the White House.

One activist who opposes rape exceptions is Savethe1's Rebecca Kiessling, whose organization consists of pro-lifers who were either conceived through rape or who were impregnated in rape. She criticized inclusion of the rape exception, noting that Graham's bill “isn't going to save any [unborn children]. This is merely a message bill.”

“They're not even concerned about the message they're sending,” said Kiessling of D.C. pro-life groups that negotiated the bill's introduction and guided its passage through the House.

Dannenfelser told the Christian Broadcasting Network that she hoped to see “a pro-life president” sign the 20-week abortion ban in early 2017. That signature would require Republicans to win the presidency and to hold the Senate. The party is defending 24 seats in 2016 compared to 10 for Democrats. Many Republican senators who face re-election next year won with the support of the Tea Party movement in 2010, which has seen its influence wane.