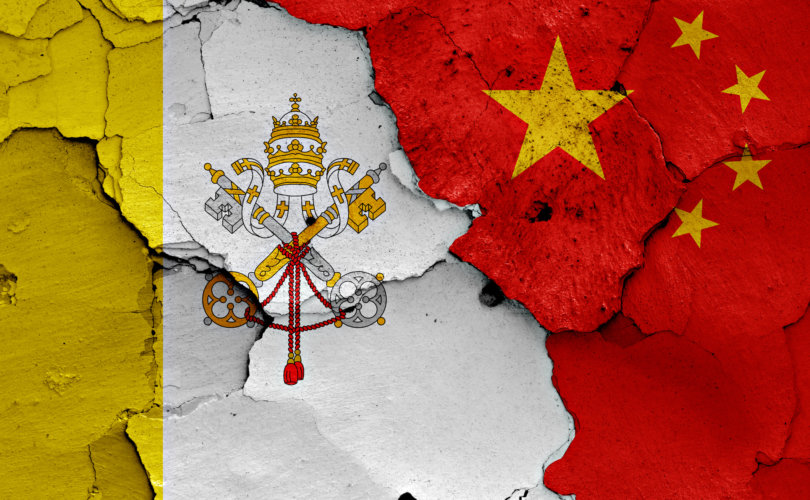 Flags of Vatican and China painted on cracked wallRacide/Getty Images

LESHAN, China (LifeSiteNews) – A Chinese Communist Party (CCP) backed bishop celebrated the 101st anniversary of the Communist founding in China on the solemnity of Sts. Peter and Paul, encouraging his congregation to “listen to the word of the Party, feel the grace of the Party, and follow the Party.”

According to a report in AsiaNews, Bishop Paul Lei Shiyin of Leshan celebrated the anniversary of the CCP’s founding in a ceremony held in the Cathedral of the Sacred Heart of Jesus in Leshan, in the district of Sichuan, on June 29, two days before the official July 1 anniversary of Mao Zedong’s Communist Party.

During the ceremony, Lei, who has been accused of having a mistress and children, reportedly told congregants that they ought to “listen to the word of the [Communist] Party, feel the grace of the Party, and follow the Party,” prompting AsiaNews to report that “[p]olitics has entered the Chinese Church” and that the “regime’s control over Catholic clergy is getting tighter.”

The Catholic Church in China has been subject to heavy suppression under the CCP, with the establishment of a puppet episcopal congregation – the government-approved Chinese Patriotic Catholic Association (CPCA) – requiring clerics to swear fealty to the murderous Chinese state, thus pushing Catholics who are faithful to the Holy See into an “underground church.”

Only bishops who are members of the CPCA are recognized by the CCP.

Despite facing increasing persecution under leader Xi Jinping, Pope Francis struck a blow to the underground Church in 2018 when he signed a secretive deal with the CCP for the consecration of bishops green-lit by the communists.

Although many of the details of the agreement have been kept under lock and key, the controversial deal – brokered in part by the disgraced former cardinal Theodore McCarrick – saw Francis cede control over the appointment of bishops in China to the CCP and CPCA, while Beijing reportedly accepted Francis as the head of the Catholic Church.

As part of the original accord made in 2018, the Pope recognized seven bishops appointed by the Chinese government who had previously been excommunicated – including Lei – even requesting that two underground, legitimate Chinese bishops cede their offices to accommodate the former schismatics.

A total of six Chinese bishops are now reported to have been consecrated under the terms of the deal while the country requires around another 40 episcopal appointments.

In comments to the Catholic News Agency, Nina Shea, the director of the Center for Religious Freedom at the Hudson Institute, said that the “CCP has all but destroyed the Catholic underground church and tightened conformity with its teachings over the patriotic church.”

“I think the Vatican should be energetically bolstering the underground church and speaking up for human rights, not making accommodations with the CCP and self-censoring on important moral issues,” the human rights advocate stated.

Reggie Littlejohn, the founder of advocacy group Women’s Rights Without Frontiers, which campaigns against forced abortion, agreed with Shea, telling the Catholic News Agency that “things have gone from bad to worse for Catholics in China” since the Sino-Vatican deal came into effect.

Littlejohn criticized the deal as exacerbating tensions between faithful Catholics and the communist regime and called upon the Vatican to grant “access to this secret deal.”

Despite Catholic oppression further heightening after initially signing the special deal with China, Francis renewed the agreement in 2020 and has indicated his desire to see the fresh ink on the deal later this year.

Speaking with Reuters’ Vatican correspondent Philip Pullella in a July 2 interview, the Pontiff doubled down on the secretive deal the Vatican has made with China, which is due for its second renewal in October of this year.

“The agreement is moving well, and I hope that in October it can be renewed,” Pope Francis told Pullella.

Defending the deal, the Pope argued that diplomacy, though bringing its own difficulties, is a necessary part of religious relations with the Chinese regime.

“Diplomacy is like that. When you face a blocked situation, you have to find the possible way, not the ideal way, out of it,” he said, adding that diplomacy “is the art of the possible and of doing things to make the possible become a reality.”

In response, Shea argued that it is “difficult to see how the Pope can possibly succeed in the art of diplomacy when dealing with a force as evil as the CCP.”