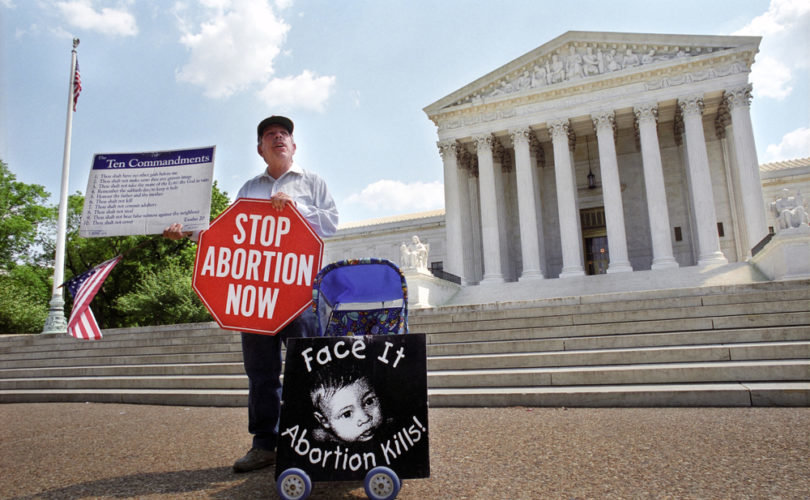 WASHINGTON, D.C., November 6, 2015 (LifeSiteNews) – The Supreme Court will decide whether the Obama administration can force employers to violate their religious beliefs and provide abortion-inducing drugs, sterilization, and contraception to all female employees next year.

The justices announced on Friday that they will consolidate seven cases brought by religious employers against the Affordable Care Act's controversial HHS mandate. The plaintiffs will argue in late March that the Obama administration's regulation violates the Religious Freedom Restoration Act, a 1993 law signed by President Bill Clinton.

The court is not scheduled to address the law's constutitionality under the First Amendment.

The RFRA holds that the government cannot force Americans to act against their sincerely held religious beliefs unless the state has a “compelling interest” to do so. If it does, the government must then use the “least restrictive means” possible to enforce the law. Opponents say the HHS mandate fails on both counts.

Each had argued that the mandate – and the Obama administration's subsequent “accommodation” – failed to relieve them of the burden of violating their conscience, because they must still participate in a process that will give their employees drugs that could take an unborn human being's life.

“We perform this loving ministry because of our faith and cannot possibly choose between our care for the elderly poor and our faith, and we shouldn’t have to,” said Sister Loraine Marie Maguire, Mother Provincial of the Little Sisters of the Poor. “All we ask is that our rights not be taken away.  The government exempts large corporations, small businesses, and other religious ministries from what they are imposing on us – we just want to keep serving the elderly poor as we have always done for 175 years. We look forward to the Supreme Court hearing our case, and pray for God’s protection of our ministry.”

“The Little Sisters spend their lives taking care of the elderly poor” — about 13,000 a year according to Mark Rienzi, senior counsel of the Becket Fund for Religious Liberty, which is representing several of the plaintiffs. “That is work our government should applaud, not punish,” he said. “The Little Sisters should not have to fight their own government to get an exemption it has already given to thousands of other employers, including Exxon, Pepsi Cola Bottling Company, and Boeing.”

“Nor should the government be allowed to say that the Sisters aren’t ‘religious enough’ to merit the exemption that churches and other religious ministries have received,” he added.

Priests for Life, which brought its own case against the HHS mandate, is happy it will be able to have its concerns heard by the high court.

“This is a great day in our battle for religious freedom against the culture of death, which wants us to participate in the spread of abortion. We will not do so, and we look forward to making our case at the Supreme Court,” said Fr. Frank Pavone, the group's national director.

His attorney, Robert Muise of the Ann Arbor-based American Freedom Law Center, said “it is particularly appropriate that Priests for Life has been fighting this mandate, since the very purpose of the organization is to oppose the very activities that the mandate supports, particularly abortion.”

This was an ecumenical undertaking, involving several Protestant and evangelical colleges, as well.

“The government has no legitimate basis for forcing faith-based organizations to be involved in providing abortion pills to their employees or students,” said Alliance Defending Freedom Senior Counsel Gregory S. Baylor, which represents Geneva College and SNU. “These Christian colleges simply want to abide by the very faith they espouse and teach. They should not be forced to choose between giving up their fundamental freedoms and paying financial penalties.”

Those guilty of violating the HHS mandate can be fined $100 per day per employee, something opponents say forces people who believe in the sanctity of life to choose between their religious convictions and their financial viability.

Americans United for Life President and CEO Dr. Charmaine Yoest said that AUL is “optimistic that the Court will uphold Americans’ fundamental freedom of conscience” in this case.

The justices already granted a similar right to closely held corporations – small businesses owned by a tiny group of shareholders, often family members – in its Hobby Lobby and Conestoga Woods cases. Rather than the First Amendment, the majority ruled that the HHS mandate violated the RFRA.

“AUL is confident that, once again, religious liberty and the freedom of conscience—principles that are protected by federal law and the Constitution—will prevail against the pro-abortion ideologues of the Obama administration,” Dr. Yoest said.

Meanwhile, pro-life Congresswoman Diane Black, R-TN, has argued that the nation should not depend on nine robed justices to decide that Americans should not have to pay for or facilitate the taking of drugs that could cause an early chemical abortion.

“While we prayerfully await this critical decision, I continue to urge passage of my bill, the Health Care Conscience Rights Act, which would offer full exemption from this coercive mandate once and for all,” she said.