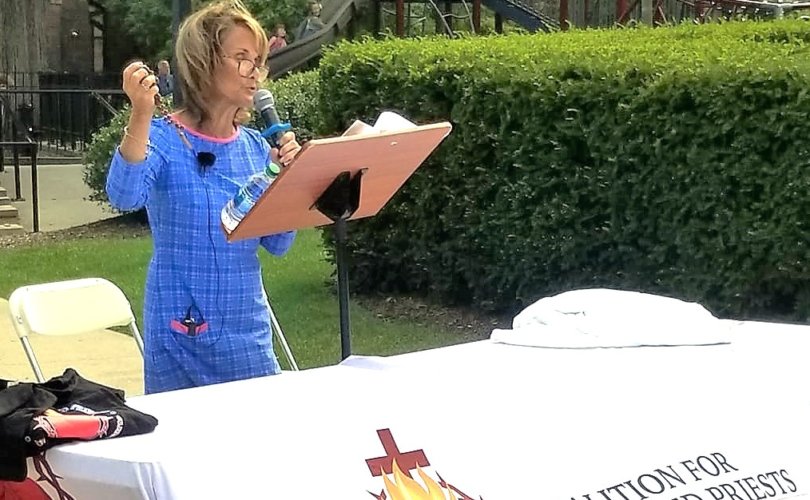 Liz Yore speaks at a rosary rally with the Coalition for Canceled Priests in Libertyville, Illinois.Facebook

LIBERTYVILLE, Illinois (LifeSiteNews) – An international child’s rights attorney is stirring Christians to “arms” using the power of speech and prayer against a war being waged upon them and their children by “godless” globalists.

“In case you haven’t been paying attention, they are coming for us. The persecution is upon us. Make no mistake about that. The greatest threat to the godless agenda is YOU,” said Liz Yore during a rosary rally held by the Coalition for Canceled Priests in Libertyville, Illinois.

Yore warned that we cannot be blindly optimistic in the face of an intellectual and spiritual assault by the “Global Marxist Elites” who are “trying to co-opt and corrupt the minds and hearts of our children.”

“We pledge our honor and our fortune that we will not be silent in the face of government tyranny or Church apostasy. The battle lines are drawn. Every parent must recognize that we are on a battlefield, and the children, our children, are ground zero,” Yore declared.

The candid attorney, who is a regular panelist of LifeSiteNews’ “Faith & Reason” series exposing the “Deep State and Deep Church,” pointed out that the Vatican itself has joined the ranks of the global elites, who have rounded out their infiltration of all sectors of society, including in government, schools, military, corporations, and the media.

— Article continues below Petition —
PETITION: We won't give any money to liberal bishops who attack the Faith
Show Petition Text
10129 have signed the petition.
Let's get to 12500!
Thank you for signing this petition!
Add your signature:
Show Petition Text

Yore cited the suppression of the Latin Mass and traditional priests as part of the “strategic” attack on the Church.

She also pointed to attacks being waged in the political sphere that include the “groom[ing]” of our children into “demonic Trans ideology,” their indoctrination with Critical Race Theory (CRT), and the demonization of parents who “dare to fight for the right of a decent education for their children,” in Yore’s words, as “domestic terrorists” by the FBI.

Yore pointed to the harsh restrictions that were imposed under the pretext of the COVID-19 virus, such as bans on public gatherings, as an example of the globalists’ tyrannical aims.

“The godless want to rob our children of their God-given right to be free, to speak their mind freely without cancellation, to attend religious services,” said Yore, adding that during the “two long miserable years” since COVID, “we watched … how the godless bureaucrats muzzled our children and denied them the right to an education.”

Yore urged Christians to boldly make their voices heard despite the global attack on freedom of speech, and all the more so because of it.

“We will never win this battle unless we destroy political correctness, which is a direct and insidious attack on free speech,” said Yore, pointing out that this is being carried out through “intimidation,” “social media,” “the education system,” and “blasphemy laws.”

“If they can successfully silence the Moral Majority, it’s game over. If they can muzzle, or worse, criminalize the moral truths of our Catholic faith, then we will be governed by the secularist, atheistic, nihilistic, elitist New World Order (NWO),” she continued.

“The most powerful weapon of all to defeat evil,” said Yore, is that of the prayer of the Holy Rosary.

“We will make the Catholic Church great again, starting here in Cook Public Square, armed with our rosaries, inspired by our canceled priests who will not remain silent or cowed by bishops or faithless diocesan hacks,” Yore continued, referring to priests who have been ousted by their bishops for their faithfulness to Catholic doctrine and tradition.

To fight the “battle for civilization, for the soul of our country, for the God-given right to practice our faith” and “attend the Mass of the ages,” Yore advised, in summary, “We must acknowledge the enemy and follow our general, the Blessed Mother.”

Yore called to mind the historic victory of the Battle of Lepanto, widely attributed to the power of the rosary.

“The blood that courses through our veins pulsates from our Catholic ancestors who fought against all odds at the Battle of Lepanto and won,” she said.

Yore closed with a prayer written by the first Archbishop of America, John Carroll, “a close friend of George Washington”:

“Mary, Immaculate Virgin, our mother, patroness of our land, we praise and honor you and give ourselves to you. Protect us from every harm. Pray for us, that acting always according to your will and the will of your divine Son, we may live and die pleasing to God. Amen.”