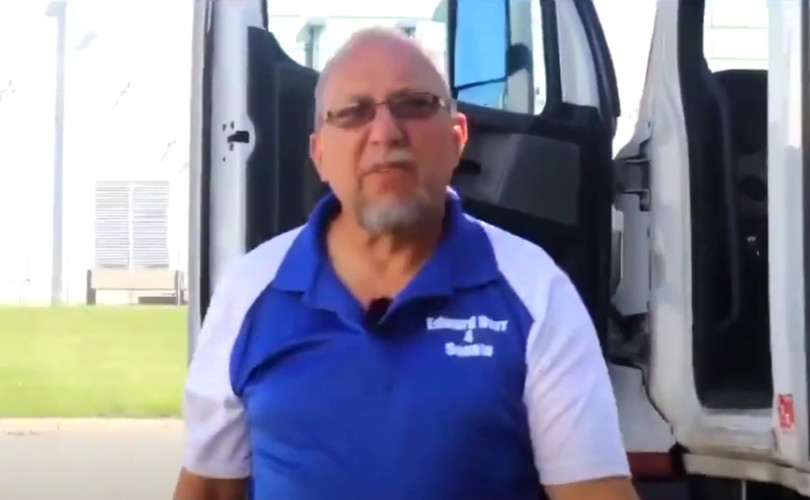 HILLSBOROUGH, New Jersey (LifeSiteNews) – A South Jersey truck driver who spent less than $10,000 on his campaign defeated one of New Jersey’s most powerful Democrats in a major upset that sent the state’s politics into chaos.

Edward Durr, a truck driver for Raymour & Flanigan with no political experience, ousted longtime Democrat state Sen. Steve Sweeney, the president of the New Jersey Senate, by more than 2,000 votes, as of Thursday.

Durr has said that he spent around $9,000 on his Senate bid, including just $153 – half of it at Dunkin’ – before his primary. His grassroots campaign reportedly knocked on the doors of more than 20,000 people.

The Republican trucker focused his messaging primarily on New Jersey’s COVID-19 restrictions and exorbitant taxes, which are among the highest in the nation.

“The Senate President has spent 20 years in Trenton,” he said in a homemade campaign video that has since gone viral. “Higher taxes, increasing debt and the rising cost of living. We deserve better. New Jersey, it’s time for a change.”

This is the New Jersey truck driver who is beating the NJ Senate President after spending only $153 on his campaign – Go Ed Durr!!
pic.twitter.com/OoqysjYprb

“The governor was messing with people’s families. When you mess with somebody’s job, their livelihood, their home, their children — people just won’t take that,” Durr explained in a Wednesday interview with Breitbart. “It was the combination of a governor who acts like a king, and a Senate president who acts like a court jester, and does nothing. That made it very easy to convince people they were not being paid attention to. And when they got ignored, they got angry.”

Sweeney, a pro-LGBT nominal Catholic, is considered the most powerful legislator in New Jersey and is the state’s longest-serving Senate president, a post he has occupied since 2010.

The 3rd Senate District that Sweeney represents has been a Democratic bastion for decades, and his re-election was apparently given little thought. The Senate leader laughingly turned down Durr’s request for a debate to his face, Durr told Breitbart.

“It is stunning and shocking and I cannot figure it out,” Senate Majority Leader Loretta Weinberg told the Associated Press.

It’s not clear who will replace Sweeney as Senate president, according to the AP. His role includes deciding which bills and governor’s nominees get voted on in the Senate.

Durr said in an interview earlier this year that he got into politics after being denied a concealed carry permit, despite never having been arrested.

“What motivated me more than anything was I went for my concealed carry and I was told flat out by the local sheriff, don’t even bother,” Durr told Elizabeth Nader. “I couldn’t get a concealed carry and that really angered me, and so I looked into what can you do to get into politics.” Durr ran for the New Jersey General Assembly in 2017 and 2019, but has never held political office.

His opponent has so far refused to concede, claiming that thousands of ballots remain to be counted, though all virtually votes are in and Durr has already beaten Sweeney’s previous vote totals going back to at least 2011.

“The results from Tuesday’s election continue to come in, for instance there were 12,000 ballots recently found in one county,” the senator said in an email to POLITICO. “While I am currently trailing in the race, we want to make sure every vote is counted.”

New Jersey’s Tuesday elections were a surprisingly strong performance for Republicans in general. Incumbent Democratic Gov. Phil Murphy currently has a narrow two-point lead over Republican challenger Jack Ciattarelli, though voting machine problems in dozens of districts have plagued the governor’s race, and Ciattarelli has not conceded. A recount is expected.

The possibility of Murphy losing re-election has sent shock waves through the national Democratic Party. Some polling showed him with a double-digit lead, and Joe Biden won the solidly blue by almost 17 points in 2020. The GOP also swept elections in Virginia, taking all three statewide offices on the ballot, including the governor’s office.