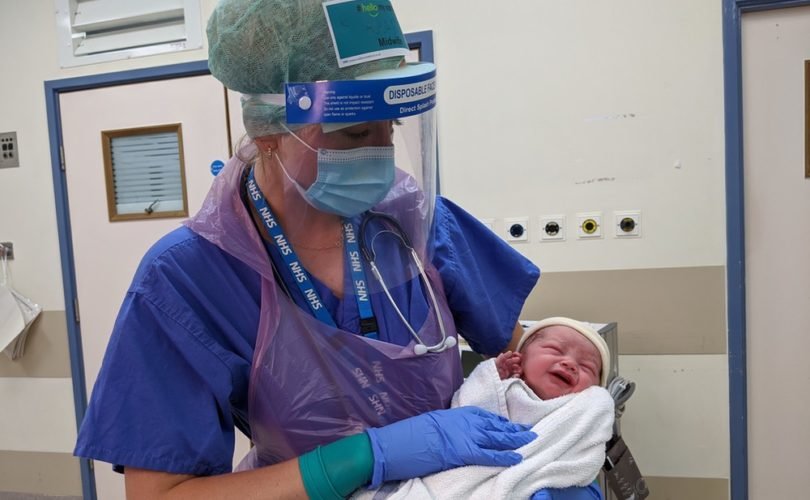 April 7, 2021 (LifeSiteNews) – Government messages to stay home, lockdowns, fear, and disruption of services at hospitals in response to COVID-19 have led to increased “avoidable deaths of both mothers and babies” during the pandemic, a study published this week in The Lancet Global Health found.

“Global maternal and fetal outcomes have worsened during the COVID-19 pandemic, with an increase in maternal deaths, stillbirth, ruptured ectopic pregnancies, and maternal depression,” according to research from several institutions, including the Fetal Medicine Unit at St George’s University Hospitals NHS Foundation Trust, the London School of Hygiene & Tropical Medicine and King’s College London.

The study, which combined data from 40 studies worldwide and measured maternal and neonatal health indicators before and during pandemic government restrictions, found considerable disparity between high-income Western countries and poorer developing countries.

Rising maternal death rates are a “matter of urgency” in low to middle-income countries like Kenya where unpublished data showed a surge of maternal mortality and pooled data found that women were 37% more likely to die in childbirth during the coronavirus outbreak than before it. The finding is “particularly concerning,” the researchers said, because poor countries already had the world’s highest maternal mortality without the impact of lockdowns and fear.

Forty-two percent of women report being verbally or physically abused during their labor before the pandemic. Now, some are forced to give birth alone, without husbands or doulas.

Analysis of three studies found that women were nearly six-fold (OR = 5.81) more likely to undergo surgical treatment of ectopic pregnancy during the pandemic than beforehand, mostly for ruptured ectopic pregnancies.

Pooled data from 12 studies found that babies were 28% more likely to be delivered stillborn during the pandemic in low- and middle-income countries.

The poor outcomes could be linked to reduced access to healthcare, the researchers surmised. “Although maternal anxiety was consistently shown to be increased during the pandemic, health-care providers around the world have reported reduced attendance for routine and unscheduled pregnancy care,” according to the study.

Some women were likely afraid of getting COVID-19 in hospitals and other centers. Others may have been deterred by mandated COVID-19 testing at every visit, with or without symptoms.

Government advice to stay at home and reduced public transport and childcare access during lockdowns likely played a role as well, the Lancet researchers said. Women in poor countries do not have access to internet for online consultations.

Women have been more likely to become unemployed and take on more childcare because of nursery and school closures. “The resultant financial and time constraints are likely to have far-reaching consequences for mothers’ physical, emotional, and financial health during pregnancy and in the future,” according to the paper.

Seven of 11 studies reporting on maternal mental health that the Lancet paper looked at reported a statistically significant increase in postnatal depression, maternal anxiety, or both.

Domestic abuse is another likely contributor to the impact on pregnant mothers. An analysis by the National Commission on Covid-19 and Criminal Justice of 18 international and U.S. studies found that violence at home rose by 8.1% early in the lockdowns.

“It is clear that pregnant individuals and babies have been subjected to harm during the pandemic, and the onus is on the academic community, health-care providers, and policy-makers to learn from it,” according to the Lancet paper.

Perhaps worse for women who had to navigate a health service and delivery system that has been described as hostile, with 42% of women saying they were verbally or physically abused during their labor before the pandemic, is that COVID restrictions forced them to deliver alone. Husbands, midwives, doulas, and visitors have been routinely banned and even nursing delivery staff cut from the labor and delivery wards during the pandemic.

As well, unreliable COVID-19 testing, regardless of symptoms, has become a routine feature of delivery wards. Hospitals routinely take babies away from parents if any of them test positive for the virus.

Most hospitals in the Western world have forced women to wear masks during labor and delivery, with reports of women being threatened by hospital staff that they will not be assisted if they take them off and some women saying they were traumatized by the experience.

A surprising and welcome side-effect of the pandemic measures, though, was the sudden and at first glance, puzzling drop in pre-term births. Findings on pre-term birth in the Lancet study but confirmed reports from Ireland and Denmark early in the pandemic that there were noticeably fewer preterm births and babies in neonatal intensive care wards in Western countries. Some low-income countries had conflicting findings.

In Denmark, 90% fewer low birthweight babies were born and an Irish study found that women were 3.77 times more likely to have a very low-birthweight baby during the previous two decades than during the lockdown.

While there was some speculation that, in spite of increased stress, pregnant women benefitted from reduced commutes and more sleep during the lockdowns there is also a the possibility that full-term births were driven, ironically, by less hospital healthcare. Pregnant women flocked to midwives and home deliveries in America in unprecedented numbers during the pandemic; if unnecessary medical interventions including induced labor, C-section deliveries, and late-pregnancy cervical checks were reduced during the lockdowns, then perhaps that is why more babies were born naturally, full-term, and higher birthweight.

The U.S.-based advocacy group Evidence Based Birth has a “Sample Informed Consent Form for Refusal to Separate Birthing Parent and Infant” on its website, which mothers giving birth can bring to hospitals.