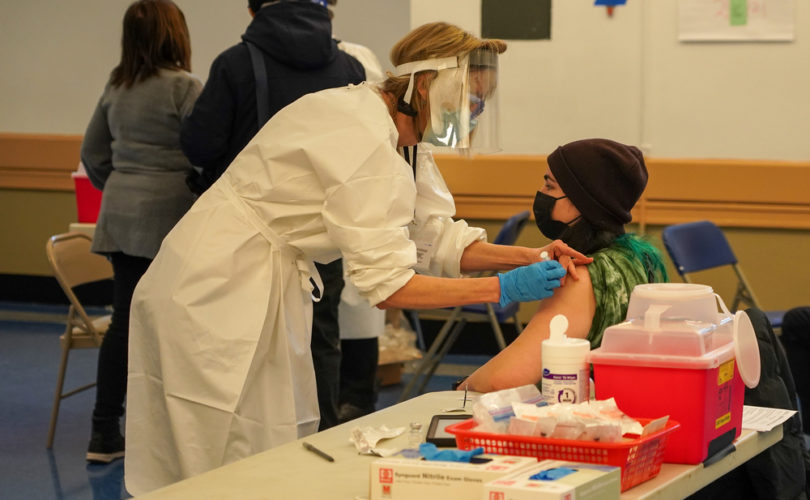 A woman receiving the COVID vaccineShutterstock

LONDON, U.K., April 7, 2021 (LifeSiteNews) –– In a strongly worded letter to the British Medical Journal, a London-based consultant has pointed to “unprecedented” levels of staff sickness following the COVID-19 injections, describing the “coercion and mandating” of the injection as reminiscent of a “Nazi dystopia.”

Published April 2 in the prestigious British Medical Journal (BMJ), the letter came from Dr. K. Polyakova, a consultant in London, in response to a BMJ article entitled “Do doctors have to have the COVID-19 vaccine?” The journal did not provide further background for Polyakova.

The original article strongly argued for the widespread uptake of the injections by medical staff, declaring that there was a moral duty to do so in order to safeguard public health, as well as downplaying any concerns which might be raised about the efficacy or safety of the injection.

The blithe tone of the BMJ’s article, and the uniform opinions of the four medics cited, raised concerns for Dr. Polyakova. She wrote that she was “struggling” to understand “the failure to report the reality of the morbidity caused by our current vaccination program within the health service and staff population.”

“The levels of sickness after vaccination is [sic] unprecedented and staff are getting very sick and some with neurological symptoms which is having a huge impact on the health service function. Even the young and healthy are off for days, some for weeks, and some requiring medical treatment. Whole teams are being taken out as they went to get vaccinated together.”

Polyakova defended this position by revealing the experience she had had in recent months, managing a health service during COVID times, as well as professing to have “more vaccines in my life than most people.”

While clearly not what has been commonly styled an “anti-vaxxer,” Polyakova wrote that coercive injections would be dangerous and against the ethical principles of the health service: “Mandatory vaccination in this instance is stupid, unethical and irresponsible when it comes to protecting our staff and public health.”

“We are in the voluntary phase of vaccination, and encouraging staff to take an unlicensed product that is impacting on their immediate health, and I have direct experience of staff contracting Covid AFTER vaccination and probably transmitting it. In fact, it is clearly stated that these vaccine products do not offer immunity or stop transmission. In which case[,] why are we doing it?”

Continuing, the consultant referred also to the undeniable lack of data about the hastily developed injections, questioning the long-term effects they would have, particularly on the health service: “There is no longitudinal safety data (a couple of months of trial data at best) available and these products are only under emergency licensing. What is to say that there are no longitudinal adverse effects that we may face that may put the entire health sector at risk?”

Pointing to seasonal flu, which is a “massive annual killer,” which “inundates the health system,” Polyakova commented that the flu vaccines are not only voluntary, but also serve to protect against other illnesses of “higher consequence.”

“Coercion and mandating medical treatments on our staff, of members of the public especially when treatments are still in the experimental phase, are firmly in the realms of a totalitarian Nazi dystopia and fall far outside of our ethical values as the guardians of health.”

Revealing that “I and my entire family” had COVID-19, as well as mourning the death of a “relatively young family member” with underlying conditions, who suffered from heart failure linked to COVID-instigated pneumonia, Polyakova nevertheless maintained a fervent opposition to forced injections.

“Despite this, I would never debase myself and agree, that we should abandon our liberal principles and the international stance on bodily sovereignty, free informed choice and human rights and support unprecedented coercion of professionals, patients and people to have experimental treatments with limited safety data. This and the policies that go with this are more of a danger to our society than anything else we have faced over the last year.”

Employing the popular phrase used by abortion advocates, Polyakova questioned, “What has happened to ‘my body my choice?’”

“What has happened to scientific and open debate? If I don’t prescribe an antibiotic to a patient who doesn’t need it as they are healthy, am I anti-antibiotics? Or an antibiotic-denier? Is it not time that people truly thought about what is happening to us and where all of this is taking us?”

Dr. Polyakova’s warnings about the “unprecedented” levels of sickness following the injections are supported by data provided by the U.K. government, documenting the ever-growing number of adverse reactions and deaths following the jabs.

By March 21, there were over 494,114 adverse side effects reported in the U.K. following the injection. Of that number, there were 5,230 cardiac disorders, 103 cardiac arrests, 140 instances of paralysis, and 704 deaths.

Indeed, as data from the U.S. Vaccine Adverse Event Reporting System (VAERS) shows, 2,249 people have died following the injections in the U.S. This number is over 20% of the entire total of VAERS-documented deaths following all vaccines since records began in 1990.

Despite this, injections continue to be promoted, with Prime Minister Boris Johnson and Health Secretary Matt Hancock reportedly planning to enforce mandatory injections for care home and social care staff. U.K. newspaper The Telegraph revealed that the pair had been working together to effect a change in law, which would mandate the injections.

Full details of the plan have yet to properly emerge, but in the meantime the U.K. looks set to effectively mandate injections as it rapidly continues plans to bring vaccine passports into use.