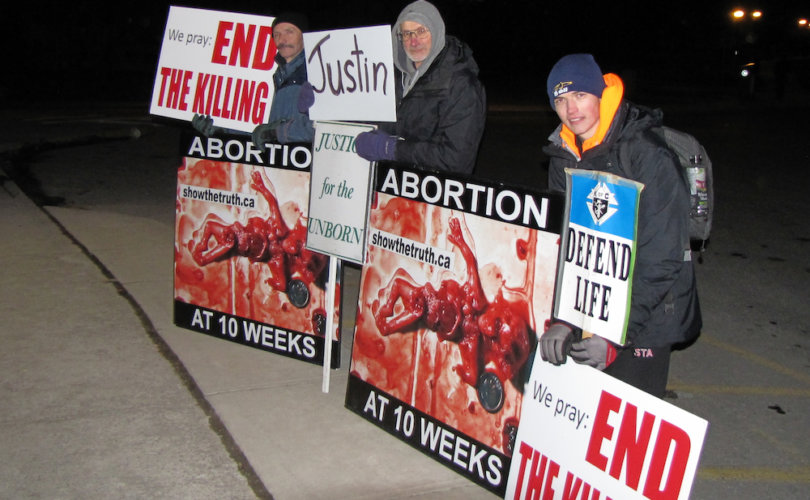 LONDON, Ontario, January 17, 2017 (LifeSiteNews) — A London man who organized a last-minute pro-life protest against Prime Minister Justin Trudeau on Friday was attacked by a woman who kicked his large graphic image of an aborted baby and tried to wrest it from him.

John Bulsza, a veteran of many public pro-life events, responded by standing on his sign while the police “quickly intervened and defused the situation,” he told LifeSiteNews.

He told the agitated woman, whom he described as “tall and in her late 20s” and “yelling her opposition,” that the unborn child has a right to life.

Bulsza and three others demonstrated outside the University of Western Ontario’s Alumni Hall. Trudeau was inside addressing a capacity crowd of about 2,000 on the second day of his cross-country tour that the Liberals billed as the young prime minister’s attempt to reconnect with Canadians.

“I didn’t want Trudeau to get away with coming to London without being challenged,” Bulsza said, adding that he wanted to hold the prime minister “accountable for the slaughter of the innocent” and to “expose his abortion stance.”

Bulsza also hoped the protest would challenge Trudeau to “change the laws and do the right thing,” he said. “He’s a Catholic and he’s supposed to be a good person. So he’s got to start acting like it.”

The four men held up two large images of 10-week-old aborted babies, the signs typically used in the Show the Truth tours, as well as a sign: “Justin,” and “We pray to: End the Killing,” and “Defend life.”

The “message reflected in the signs was ‘Justin, see – this is the human carnage you are supporting and advocating; Justin, end the killing; Justin, defend life; Justin, justice for the unborn; Justin, respect the dignity and sanctity of human life!’” Bulsza pointed out.

Many in the spillover crowd spoke to the pro-life demonstrators and took cell phone photos of the signs, he said.

And when the audience came “pouring out through the front doors,” there was further opportunity to field the usual questions: “What about rape; what about it being my body and my choice; what about fetal abnormalities; what’s God got to do with it; what about you being a man; it’s a woman issue … ?”

“Most of those who approached our displays took pictures, sometimes adding ‘thank you.’ Some asked for more information, sometimes asking for a website address to learn more about the issue,” he observed.

“There were also a few pregnant young women who came up to our displays, nodding with a smile, accepting the message.”

Bulsza asked a UWO business student who had been inside the Hall if anyone questioned Trudeau about abortion or euthanasia. His answer was “no.”

Trudeau, arguably Canada’s most pro-abortion prime minister to date, has been described by Campaign Life Coalition as an “abortion extremist” who erroneously claims abortion is a Charter right.

As Liberal leader, he infamously barred candidates with pro-life convictions from running as candidates for the party, which has traditionally been the party Catholics support.

“If the prime minister is truly a Catholic or at least a man of good will, and as leader of our nation,” Bulsza reiterated, “then he must stop the killing of innocent unborn children by enacting laws that will recognize them as human beings and grant them protection and rights they deserve.”