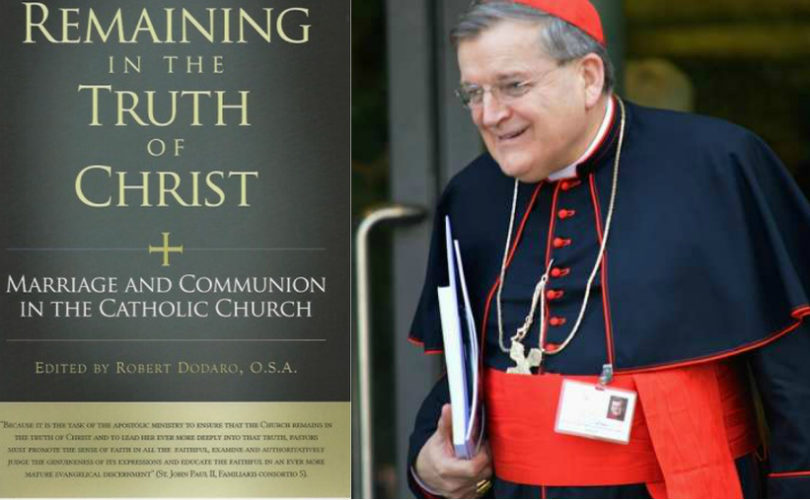 Editor's Note: This article is re-published in light of the large role being played by Fr. Rosica at the current Synod on the Family.

ROME, March 2, 2015 (LifeSiteNews.com) – Citing Scripture, Cardinal Raymond Burke told an interviewer this week that Catholics should not sue each other: “Our Lord in the Gospel and St. Paul in his First Letter to the Corinthians instruct us not to take our disputes to the civil forum, that we should be able, as Catholics, to resolve these matters among ourselves.”

The cardinal’s comments to the Traditionalist Catholic website Rorate Caeli follow an uproar in the Catholic media world last week when it was revealed that Vatican spokesman Father Thomas Rosica has threatened to sue a Canadian blogger for defamation in the civil courts.

Cardinal Burke, who served under Pope Benedict XVI and Pope Francis as the head of the Vatican’s highest court, is a noted expert on canon law. He told Rorate Caeli, “Unless the blogger has committed a calumny on someone's good name unjustly, I certainly don't think that that's the way we as Catholics should deal with these matters.”

“I think contact should be made. I presume that the Catholic blogger is in good faith, and if there’s someone in the hierarchy who is upset with him, the way to deal with it would be first to approach the person directly and try to resolve the matter in that way,” Burke added.

Fr. Rosica, a Canadian Basilian, is the English language press officer for the Vatican and founder of the Toronto-based Salt and Light Television network.

He sent the legal letter to David Domet, a Toronto music composer and part-time Catholic blogger who has long criticized what he says are Fr. Rosica’s departures from Catholic orthodoxy. The priest’s lawyer told Domet to remove nine separate items from his blog and apologize, but added that this would not necessarily remove the threat of the civil action.

The conflict was covered in a feature by Michael Voris’ Church Militant TV, and the internet’s Catholic blogger world exploded with indignation. So furious was the backlash that it got coverage by the US conservative news site, Breitbart. This followed dozens of blog posts, nearly unanimously calling the threatened legal action of a well-placed priest against a lay pensioner a “PR disaster” for Rosica.

The uproar has launched Domet’s small blog, Vox Cantoris, into the international limelight, and has earned Fr. Rosica an avalanche of criticism. “Though Rosica publicly defends the right to freedom of speech and press, he is attempting to silence the blogger who has criticized him,” Austin Ruse, president of the Catholic Family and Human Rights Institute, wrote for Breitbart.

Among Domet’s criticisms of Fr. Rosica is his apparent support for the proposal by Cardinal Walter Kasper to allow divorced and civilly remarried Catholics, and others in “irregular” sexual unions, to receive Holy Communion.

Fr. Rosica has also recently come under fire for comments he made a year ago, in a lecture in Windsor, Ontario, in which he argued that Catholic doctrine could change. (See video below. Quotes can be found at 48:12.)

“Will this Pope re-write controversial Church doctrines?” Fr. Rosica said in the lecture, which was posted to Youtube. “No. But that isn't how doctrine changes. Doctrine changes when pastoral contexts shift and new insights emerge such that particularly doctrinal formulations no longer mediate the saving message of God's transforming love.”

Fr. Rosica continued: “Doctrine changes when the Church has leaders and teachers who are not afraid to take note of new contexts and emerging insights. It changes when the Church has pastors who do what Francis has been insisting: leave the securities of your chanceries, of your rectories, of your safe places, of your episcopal residences go set aside the small-minded rules that often keep you locked up and shielded from the world.”

In the Rorate Caeli interview, Cardinal Burke refuted the idea that the Church can change its “pastoral practice” without changing doctrine.

“You’re saying that, in some circumstances, adultery is permissible and even good, if people can live in adultery and still receive the sacraments. That is a very serious matter, and Catholics have to insist that the Church’s discipline not be changed in some way which would, in fact, weaken our teaching on one of the most fundamental truths, the truth about marriage and the family,” Cardinal Burke said.

Fr. Rosica recently criticized Cardinal Burke on his Twitter account by posting an article by Washington, D.C.’s Cardinal Donald Wuerl on “dissent” in the hierarchy, saying, “Cardinal Wuerl’s response to Burke (and dissenters).”

The priest has also had a confrontational relationship with the pro-life movement for years.

In 1996, Fr. Rosica called the police on pro-life advocates who were leafletting in protest at a lecture by famous dissident Gregory Baum at the University of Toronto’s Newman Centre.

In 2009, Fr. Rosica wrote against objections to the lavish Catholic funeral for US Senator Ted Kennedy’s in Boston. He excoriated the pro-life movement for what he called their lack of “civility.”

“Civility, charity, mercy and politeness seem to have dropped out of the pro-life lexicon,” Fr. Rosica wrote. “To recognize and bring out the sin in others means also recognizing one’s self as a sinner and in need of God’s boundless mercy.

“Let us pray that we will become more and more a people, a church and a community overflowing with mercy.”