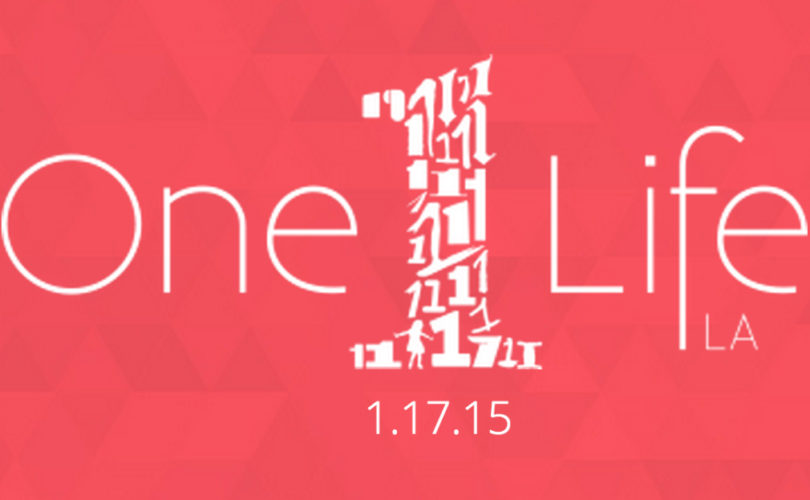 “This is completely the idea of Archbishop (Jose) Gomez,” Kathleen Buckley Domingo, Life Coordinator for the archdiocese’s Office of Life, Justice and Peace told LifeSiteNews. “He really provided the entire vision and framework for this event.”

The event takes place outdoors in downtown Los Angeles and offers a long list of pro-life presenters, who will speak about abortion, human trafficking, euthanasia, and adoption.

The keynote speaker is Ryan Bomberger of the Radiance Foundation. Bomberger plans to debut a new 60-second video titled Never Picture Perfect, addressing the emptiness that occurs when those who are considered imperfect in life are discarded.

Also appearing at the pro-life event are actor and pro-life activist Eduardo Verastegui, Supreme Knight of Columbus Carl Anderson, 40 Days for Life Director David Bereit, Mother Agnes Mary Donovan, SV, the first Superior General of the Sisters of Life, and many others.

“One of the first things [Archbishop Gomez] did when he got here,” said Domingo, “was to look around and say, ‘People don’t need to travel to San Francisco or Washington D.C. (for the West Coast walk for Life or the annual national March for Life), they should be able to be pro-life right here in Los Angeles.’”

The archbishop put words into action. Not only was the idea for OneLifeLA born, the archbishop expanded and renewed the archdiocese’s Office of Peace and Justice to its current form of Life, Justice and Peace.

One of his priorities upon arrival was “proclaiming the Culture of Life,” Domingo said.

“As a Church, we are entrusted with the good news of Jesus Christ — that the human person is sacred and created in the image of God,” the archbishop said in his first pastoral letter.

“This move will strengthen every aspect of our Archdiocese’s vital social mission — from our many works of charity and service, to our efforts to seek justice for immigrants, workers, the imprisoned, and the poor,” Archbishop Gomez said of his decision to expand the Justice and Peace office and combine it with pro-life. “This change will also advance our efforts to build a culture of life — because it will demonstrate our belief that the right to life is the foundation of every other right and liberty and the true foundation of justice and peace in society.”

For the last six or so months, that has meant heavy focus on planning and organizing Los Angeles’s first-ever large-scale pro-life event.

OneLifeLA’s purpose is to “celebrate the beauty and dignity of every human life from conception to natural death,” according to event info, and also to “declare a commitment to valuing and protecting all human life, particularly the most vulnerable in our community.”

Domingo also stressed that the goal of OneLifeLA was not for it to be an event in and of itself, but to inspire people to take action. Organizers don’t just want people to come to a meaningful pro-life event and go home thinking it was great. The idea is for them to leave with the ability to put their pro-life convictions in motion.

Domingo said getting OneLifeLA going was the perfect way to organize parishes and groom leaders on the ground for the pro-life cause.

Archbishop Gomez was also instructive in nurturing the unity component of the event, Domingo told LifeSiteNews. OneLifeLA’s community partners involve organizations from across the spectrum of supporting life, including foster parenting, adoption, ministry to the homeless, Special Olympics, refugee services, and poverty relief.

“We are definitely pulling all of our community together,” Domingo said, “and building a culture of life in Los Angeles.”

Archbishop Gomez succeeded Cardinal Roger Mahoney when the cardinal retired in 2011 after 25 years as head of the LA archdiocese.

The archbishop has been a strong supporter of the pro-life cause since before his time in Los Angeles. He was one of the many bishops to oppose the scandal created by Notre Dame’s 2009 invitation to Barack Obama to speak at the university. He was also a close second to Cardinal Timothy Dolan when the U.S. Bishops voted last November for the next chairman of their Committee on Pro-Life Activities.

The Archdiocese of Los Angeles will co-sponsor OneLifeLA along with the Knights of Columbus, Right to Life League of Southern California, and the Dioceses of Orange, San Diego, San Bernardino, and Fresno.

Domingo told LifeSiteNews that busses will be coming in from all of those areas, and they expect thousands to attend.

“We know they’re coming far and wide from the southern California region,” she said. “We’re gearing up for a nice big crowd.”

OneLifeLA is free and geared for families, including a picnic, free concert and a pro-life walk. More information is available at onelifela.org.