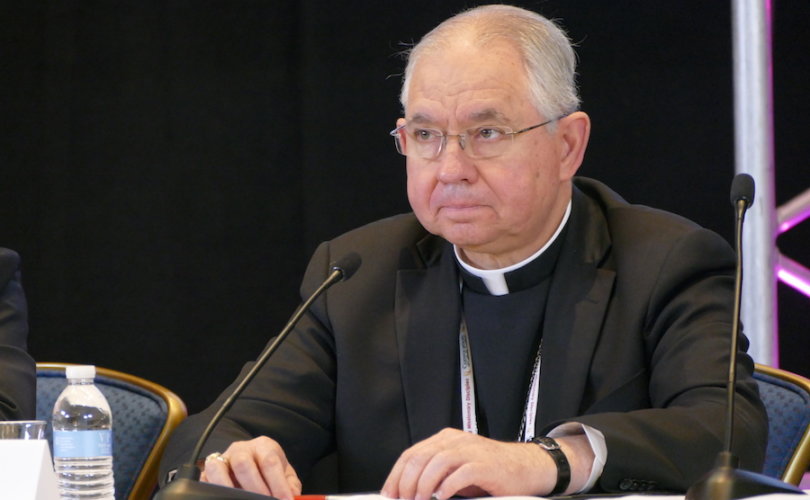 January 15, 2018 (LifeSiteNews) – Under the leadership of the ultraliberal Cardinal Roger Mahoney, the Archdiocese of Los Angeles’ annual Religious Education Congress  – billed as the biggest annual gathering of Catholics in the country – gained a reputation for functioning as a platform for dissidents who seek to undermine Catholic doctrine on life and family issues.

When Mahoney left office in 2011 in disgrace following revelations of his protection of priests accused of child sex abuse, he was replaced by Archbishop José Gomez, a former Opus Dei priest perceived as a conservative. Expectations were high that Gomez’s administration would lead to a reversal of Mahoney’s policies. However, almost seven years later, the Religious Education Congress continues to promote Mahoney’s dissident agenda with apparent impunity, at the expense of the Church’s doctrines on life and family.

This year, as in previous years, the Religious Education Congress features a roster of speakers that includes promoters of the homosexual agenda, several of whom have found a warm welcome in Gomez’s archdiocese.

Under the topic “LGBT ministry,” which include nine scheduled talks, speakers include Fr. James Martin, who regards homosexual orientation as part of God’s design of the individual, and as a person’s legitimate “identity.” Martin calls “LGBT people” “holy” without giving any qualifications and openly advocates eliminating the phrase “intrinsically evil” from the Catechism of the Catholic Church’s description of homosexual acts. Martin will be giving a talk on the topic “Building a Bridge: Bringing Together LGBT Catholics and the Church” as well as two other talks, one on “ecumenism” and another on “The Historical Jesus.”

Dr. Arthur Fitzmaurice, an open homosexual and LGBT activist who says that the Catechism of the Catholic Church is “evil” because of its language regarding homosexuals, will be giving two talks at the conference: “Transgender in Our Schools: One Bread, One Body,” and “Teaching Mercy: Accompanying LGBT Students.” At the Religious Education Congress in 2015, Fitzmaurice condemned the Catechism’s teaching that homosexual orientation is “intrinsically disordered,” asserting that “to keep this abusive language in the Catechism and other Church writings is, in itself, gravely evil.”

Fr. Bryan Massingale, who openly advocates the LGBT political agenda, will also be giving a talk with the title “Transgender in Our Schools: One Bread, One Body.” Massingale spoke last year at the annual symposium of the condemned homosexualist organization “New Ways Ministry,” which seeks to eliminate Catholic moral teaching against homosexual acts. According to the dissenting National Catholic Reporter, Massingale “shared a note he had received in 2002 from [Archbishop] Rembert Weakland” who had recently resigned after he was exposed as having paid hundreds of thousands of diocesan funds to a man with whom he had a homosexual tryst. Massingale quoted the note from Weakland stating, “On the gay issue, the level of fears is so high that the official teaching of the church skates so very close to the edge of a new 'theology of contempt.”

Massingale has publicly opposed the Trump administration’s executive order to protect religious liberty because he regards it as “unnecessary and most likely would threaten the rights of LGBT persons.” Although Christians have lost their businesses for refusing to cooperate with the celebration or practice of homosexuality, Massingale writes, “Despite the rhetoric of persecution embraced by some, Christians are not under attack in this country.”

An open lesbian named Yunuen Trujillo will be giving two talks in Spanish, titled “Family acceptance project: Myths and realities regarding the gay community,” and “Catholic and gay: Answers to the most basic pastoral questions.”

In a recent video, Trujillo claims that for homosexuals having a “partner” and being chaste are “equally holy.”

Fr. Chris Ponnet will be giving a talk on the topic, “Teaching Mercy: Accompanying LGBT Students.” Ponnet is the “spiritual director” for the Archdiocese of Los Angeles Office of Catholic Ministry with Lesbian and Gay Persons. He recently gave an interview to the UCLA student newspaper The Daily Bruin, in which he says that after years of some people being “harsh and bitter” towards the gay lifestyle, “society is beginning to look at what a committed relationship means in the gay and lesbian experience.” He adds, according to the newspaper, that “while the Catholic Church does not bless LGBT relationships, he thinks the church's outlook on LGBT inclusion is changing.”

According to the talk’s description, Ponnet will do a “workshop” that will “share concrete tools and consider real scenarios to help educators discern a merciful balance between teaching doctrine and offering pastoral care as they accompany LGBT students through journeys of self-discovery and self-acceptance.”

Many of the above-named speakers, such as Fitzmaurice, Ponnet, and Trujillo, actually work for the Gomez-led Archdiocese of Los Angeles in various “ministries” to homosexuals.

This year’s congress appears to be equally devoid of material on the right to life. The talks being given under the headings of “life” and “family” make no mention nor even hint at topics such as abortion and the right to life, artificial birth control, euthanasia, or natural family planning. The “Life Issues” category instead includes many topics dear to the gay agenda, such as “Aligning Responses to Bullying with Catholic Schools,” “Bullying Out – Formation In,” “All Are Welcome in This Place: Rise Up in Communion.” Others cover Stuart Smalley” style pop psychology topics, such as “13 Reasons Why You Matter.”

The only exception to the “gay-friendly” themes at this year’s congress is a single topic by Fr. Ed Benioff, who ministers to those who suffer from same-sex attraction as a part of the orthodox Catholic organization “Courage.” Courage helps such people to resist their sexual impulses and to live a celibate and chaste life. Benioff will be speaking on the Courage ministry, but the title of his talk also hints at relativism: “Finding Courage – A Way for Catholics with Same-Sex Attractions.” The talk has been placed into the category of “Morality” rather than “LGBT.” Under the same heading, Fr. Massingale will give a talk called “Sin: From Breaking Rules to Violating Justice.”

“During and after the 2017 Congress, I spoke with representatives of the LA Archdiocese, including Archbishop Gomez and told them about my concerns,” Sciambra told LifeSite. “Yet, this year, they inexplicably invited probably the most controversial speaker in the Catholic Church on the topic of homosexuality: James Martin, S.J.”

Sciambra also told LifeSiteNews that he handed out pamphlets at the 2017 congress warning participants of the unorthodox stances of speakers on life and family issues, and found that many were shocked and surprised to learn that such speakers could be appearing at a congress approved and sponsored by the Archdiocese of Los Angeles.

“When I informed Catholics, who were attending the Congress, that certain speakers were criticizing The Catechism, they were genuinely shocked,” Sciambra told LifeSite. “The response I heard several times was: ‘But this is a Catholic conference; it is sponsored by the Archdiocese of LA; the Archbishop is here?’ Their point is that, because the LA Congress is an official Archdiocesan event, everyone who speaks upholds Church teaching. A reasonable assumption.”

Sciambra noted that the “mere presence” of such speakers at an official congress of the archdiocese “imparts upon them a certain imprimatur.”

“Unfortunately, many devout and faithful Catholics do not understand or even know what the Church teaches about homosexuality. Therefore, when they attend a lecture by [Fr. James] Martin at an official Catholic conference, they will assume that everything he wrote and says supports those teachings.”

“In other words, the Bishops, who allow such speakers, are contributing to confusion and the outright dispersion of lies,” said Sciambra.

Priest to LA Religious Congress : ‘It’s impossible to give a moral rule that applies always’

The Betrayal of Homosexuals

The tears of a mother: The tragedy of pro-gay Catholic ministries in the Archdiocese of LA