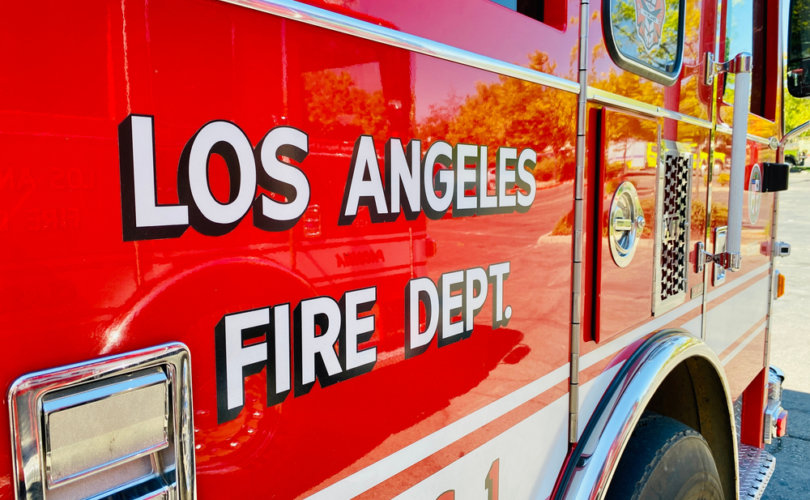 LOS ANGELES (LifeSiteNews) — Just weeks after forming a coalition and retaining legal counsel, 871 Los Angeles firefighters, representing roughly 25% of the total personnel on the department, have filed a notice of intent to sue California’s most populous city for its COVID-19 vaccine mandate, the Epoch Times reported Saturday.

The notice of intent names the Los Angeles Fire Department (LAFD), as well as Fire Chief Ralph Terrazas and Battalion Chiefs Jamie Lesinski, Nick Ferrari, and Vince Alvarado as having caused “injury, damage, or loss” by setting a hard deadline of October 20 by which all city firefighters must get vaccinated or else risk losing their jobs.

The mandate handed down by the LAFD follows a city-wide mandate forcing some 60,000 public employees to get inoculated against the coronavirus by an original deadline of October 5.

Attorney Kevin McBride, who is representing the firefighters, told KTLA the mandate is “uncalled for. It’s wrong, and we will be in court in ten days.”

The firefighters have claimed $2 million each in damages which, if awarded, would amount to a total of $1.7 billion in payouts, KTLA reported.

“The claims will be filed in Superior Court as an unlimited civil case pursuant to California Code of Civil Procedure,” McBride said.

Hundreds of #Firefighters in #LosAngeles have filed a notice of intent to sue the city over its public employee #VaccineMandate.

The notice, filed on Oct. 7, says that the 871 firefighters are seeking $2.5 million each in damages. https://t.co/1FcNrlua1g

Submitted October 7, the notice of intent filing stated that the department and chiefs in question told their employees they would be sent home for five days without pay if they refused to get the mandated injection by the deadline.

If the firefighters hold firm in their refusal of the experimental inoculation, the LAFD has threatened to fire them.

In their statement of intent to sue, the firefighters argued the threats go against the collective bargaining agreement between the city of Los Angeles and the firefighters’ union, and deny them their due process rights.

The emergency responders stated the LAFD and its chiefs have committed “blatantly wrongful conduct” by forcing their employees to get the jab, and argued that the mandate “can only have been intended to intimidate, frighten, coerce and force Claimants to receive a Covid shot before Oct 20.”

Calling the mandate “extreme and outrageous,” the filing contended the policy was enacted “in reckless disregard of the probability of causing emotional distress to Claimants,” adding that such harm has in fact occurred.

One of the 871 firefighters, LAFD veteran Andre Velker, expressed his frustration with the department’s mandate in an interview with KTLA, saying, “I can’t go to work and perform the way they want me to, knowing that the end game is that they’re going to fire me.”

“It breaks my heart that I can’t even be there with my crew,” Velker added, wiping away tears.

Noting that some of the firefighters have been “on the verge of going ‘off stress’” as a result of the psychologically taxing mandate, McBride argued in the filing that the requirement had been “intentionally or negligently designed and intended to cause severe emotional distress” by “threatening Claimants with an artificial and unenforceable deadline to frighten [them] into taking an unwanted Covid vaccine.”

The notice also claimed the mandate has pitted members of the public against firefighters who have chosen to opt out of the experimental injection.

“To make matters worse, if that were even possible, the Department is now setting citizens of the City of Los Angeles against Claimants and other unvaccinated firefighters through media and public relations campaigns, creating fear and confusion in the general public. Consequently, Claimants now suffer indignities and viperous comments when responding to emergency calls, which compounds and increases the stress suffered by Claimants,” the filing stated.

The notice also pointed out that the COVID-19 vaccine mandate is a violation of the firefighters’ right to privacy.

“[T]he right to exercise informed consent to accept, or not accept, novel and unproven medical treatments without force, fraud, deceit, duress, coercion, or undue influence … is an inalienable autonomy privacy right protected under the California Constitution, section I, article 1; and at common law,” the document read.

Warning the city to take the firefighters’ concerns and demands seriously, McBride said the large number of firefighters bucking the mandate should encourage those imposing the requirements to think twice.

If one out of every four firefighters were to be sent home, McBride suggested, the city would not have enough personnel to respond to emergencies.

Mike Feuer, attorney for the city of Los Angeles, responded to the firefighters’ effort by saying he was “confident we will prevail,” citing decisions by the Supreme Court and lower courts which have upheld prior vaccine mandates.

The decision to file a notice of intent comes after the firefighters made headlines last month when they organized and joined forces with the Los Angeles Police Department to sue the city for its vaccine mandate.

“Our goal is to stop the mandated vaccinations for all City employees as well as the citizens of this great country,” the Firefighters for Freedom organization said on its website.

The group asked supporters to “[p]lease stand with us in this monumental fight to preserve our Liberties.”

As previously reported by LifeSiteNews, Granucci said he was “done being silent” and hinted that he had joined with hundreds of like-minded city employees who were ready and willing to take legal action to protect their freedom to refuse the jab.