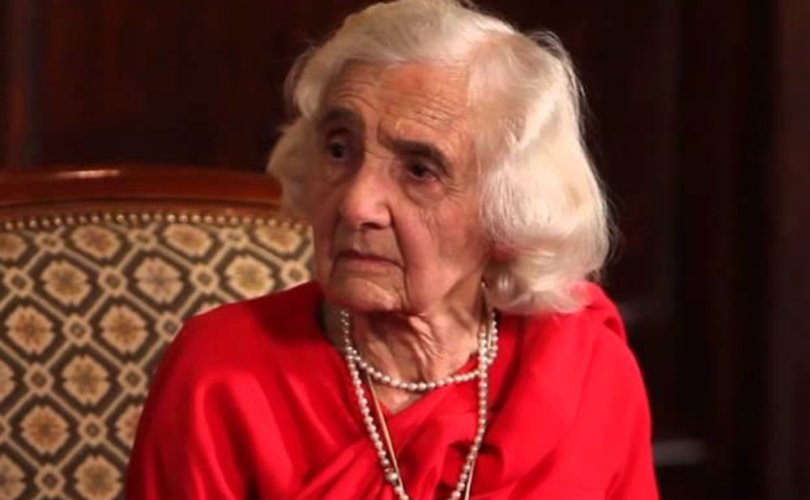 Alice von Hildebrand, known as “Lily” to friends, moved to the USA as a refugee in 1940. In 1947, she began a long career as a teacher at New York City’s Hunter College. She was named a Professor of Philosophy there and retired in 1984.

In the 1940s, Alice Jourdain pursued graduate studies at Fordham University in New York City and took 18 courses with fellow refugee Dietrich von Hildebrand.  Alice served as both Dietrich’s secretary and collaborator, and they married in 1959, two years after the death of his first wife, Margarete. Dietrich himself died in 1977 and was the subject of Alice’s acclaimed 2000 Ignatius Press biography The Soul of a Lion: Dietrich von Hildebrand.

Alice von Hildebrand wrote several other books, including The Privilege of Being a Woman, Man & Woman: A Divine Intervention, By Love Refined: Letters to a Young Bride; Memoirs of a Failure; and an English translation of radio lectures her husband gave in 1930s Germany, The Art of Living. Her work also appeared in such journals as the New Oxford Review, Homiletic and Pastoral Review, Crisis and The Wanderer. Von Hildebrand also wrote for the Catholic News Agency and made at least 80 appearances on EWTN.

— Article continues below Petition —
PETITION: STOP Medical Discrimination at the Ronald McDonald House!
Show Petition Text
15952 have signed the petition.
Let's get to 17500!
Thank you for signing this petition!
Add your signature:
Show Petition Text

As a teacher and speaker, Von Hildebrand remained in demand for the rest of her life. She taught at the Franciscan University of Steubenville in Ohio, Ave Maria College in Michigan, and the Notre Dame Graduate School of Christendom College in Virginia.

John-Henry Westen, the Co-founder and Editor-in-Chief of LifeSiteNews paid tribute to the late Alice von Hildebrand this morning.

“She was a great woman of faith, fearlessly willing to speak the truth of Christ and His Church,” Westen said.

“It was particularly impressive to see her speaking the truth about the predominant ideologies of the world for which there would be persecution. She spoke where so many men were unwilling to do so.”

John Henry Crosby, the President and Founder of the Hildebrand Project, announced her death this morning, saying that his sadness was “suffused with joy” because Alice von Hildebrand has “gone home to the Lord.”

“Those who knew Lily often heard her say that the wick of her candle was growing ever shorter,” he wrote.

“In fact, she yearned for death — to see the face of Our Lord, to be reunited at last with her husband Dietrich, her parents, her dearest friend Madeleine Stebbins — with the peace that only true innocence and profound faith can grant.”

Crosby said that the funeral details would be announced “in due course.”

Joe Matt, editor of The Wanderer, told LifeSiteNews that his readers have been “blessed to read” the late philosopher’s writing.

“The readers of The Wanderer have been blessed to read the wisdom and vast understanding of the Catholic faith that Alice von Hildebrand shared in her columns for over four decades,” he said by email.

“Her contribution to the Church and to the defence of Catholicism is immeasurable. The countless people she touched in her witness to the Catholic faith will not be fully known until the end of time. Her words are even more valuable today as our world continues to distance itself from our Creator,” Matt continued.

“Alice von Hildebrand, a Catholic icon, will truly be missed. May her soul rest in peace.”