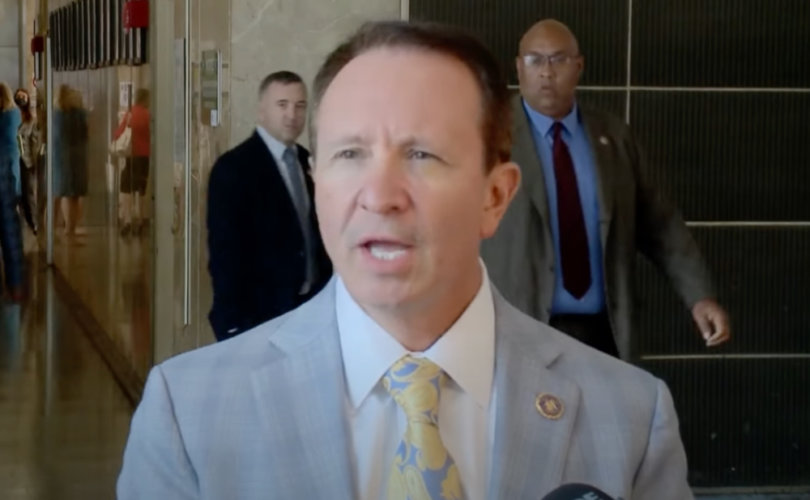 “As Attorney General and member of the Bond Commission, it is my belief that a parish or municipality should not benefit from the hard-working taxpayers of this State while ignoring laws validly enacted by the people through their representatives,” Landry’s letter states.

New Orleans officials announced earlier this month that they would not enforce Louisiana’s trigger law, which is considered one of the strictest in the country.

Citing the “City’s open defiance of the will of the people of Louisiana,” Landry urged the Bond Commission “to defer any applications for the City of New Orleans, Orleans Parish, and any local governmental entity or political subdivision under its purview.”

“I ask that you and my fellow Bond Commission members join me in ensuring that the parishes and municipalities of this State comply with all laws of our State, especially those protecting the lives of the unborn,” the letter concludes.

— Article continues below Petition —
Parents' Pledge: We will pull our children out of explicit sex-ed classes
Show Petition Text
4725 have signed the petition.
Let's get to 5000!
Thank you for signing this petition!
Add your signature:
Show Petition Text

The law further states that for a woman to get an abortion, she would need to get a diagnosis from two separate doctors, and imposes a prison sentence of fifteen years and up to $200,000 in fines for abortion providers. Abortion patients are excluded from prosecution and fines under the law, however.

Reacting to the Landry’s letter, New Orleans Mayor LaToya Cantrell told 4WWL that she was not surprised, adding that “it only makes me have to focus and double down on my efforts to ensure that the women of this city are in a safe haven and they’re protected every step of the way.”

“The idea that you seek to punish all the people living in a certain area because you are at odds with some of their elected officials, that’s not a reasonable approach,” Edwards said in a press briefing Tuesday.

You are not just punishing those people. The bond committee meeting at issue will take up reauthorization of funding for projects that are already under construction, and it’s necessary to pay bills that have already been incurred and to complete projects that are underway.

“If you don’t complete those projects, in New Orleans or anywhere, who you’re really punishing are the business people and their workers and their families more than anybody else,” he continued.

The letter comes as a judge in Baton Rouge blocked the state’s trigger law pending a lawsuit moved from New Orleans to Baton Rouge filed by abortion providers. The block came after a previous judge lifted an injunction placed on it. The new block is set to expire on July 29 pending a hearing.

New Orleans is not the only municipality that refuses to enforce a state trigger law. Boise City Council voted Tuesday to make the Idaho state capital a “sanctuary city” for abortions.

Last month, a group of 90 states attorneys general and prosecutors released a statement announcing that they would not enforce state abortion bans. At least 20 of the prosecutors have received campaign funding from George Soros.

Despite this, multiple states have enforced trigger laws in the wake of the Supreme Court’s overturn of Roe v. Wade last month. LifeSiteNews continues to update a list of states where state trigger laws have or are soon to take effect.