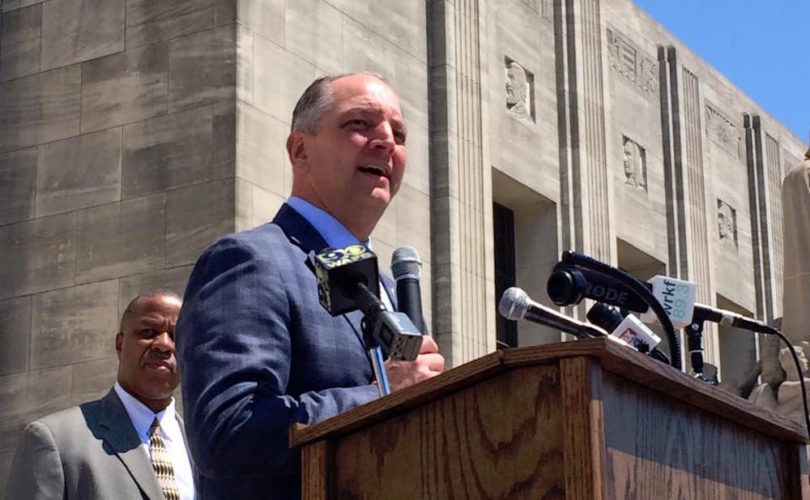 BATON ROUGE, June 1, 2016 (LifeSiteNews) – Louisiana has become the sixth state to ban dismemberment abortion, after Governor John Bel Edwards signed a bill that would outlaw the most common form of second-trimester abortion.

The Unborn Child Protection From Dismemberment Act (H.B. 1081) bars abortionists from performing dilation and evacuation (D&E) abortion, the method used in approximately 95 percent of abortions in the second trimester. Violators will face up to two years in prison and a fine of $1,000 per abortion.

“Louisiana has a long history of protecting the most vulnerable members of our society,” said the bill's sponsor, State Rep. Michael Johnson, R-Bossier. “HB 1081 will continue in that tradition by protecting these little ones from the barbaric practice of being torn apart in the womb by an abortionist's forceps.”

“This legislation is a statement about who we are as a people,” Rep. Johnson, who is also a constitutional attorney, said after his bill's signing. “In Louisiana, we believe every human life is valuable and worthy of protection, and No civil society should allow its unborn children to be ripped apart. Incredible as it seems, we needed a law to say that. We have it now.”

The bill's only exception is if the mother faces a “serious health risk,” which the bill defines as either death or the “substantial and irreversible physical impairment of a major bodily function, not including psychological or emotional conditions.” A “mother's health” exception that includes mental health has often been stretched to allow abortion under virtually any circumstances.

Approximately 1,000 children a year are aborted by the D&E abortion method, according to the Louisiana Department of Health and Hospitals (DHH).

Dr. Anthony Levatino, who performed more than 1,200 abortions, described the process of tearing a child limb-from-limb in a viral video earlier this year. About one-third of pro-choice women changed their minds on abortion after seeing a non-graphic, but medically accurate, depiction of the D&E abortion procedure.

Five other states – Kansas, Oklahoma, West Virginia, Mississippi, and Alabama – have also adopted laws to end dismemberment abortion. However, judges have ruled against those laws in Oklahoma and Kansas.

This is notable for being the first one signed by a Democrat. West Virginia legislators overrode the veto of their Democratic governor, Earl Ray Tomblin, in March to enact a ban on D&E abortion.

“Thanks to Gov. Edwards’ signature, Louisiana becomes the sixth state in the nation to protect unborn babies from the brutal practice of dismemberment abortions,” said Benjamin Clapper, the executive director of Louisiana Right to Life.

Gov. Edwards also recently signed a bill extending the state's waiting period before an abortion from 24 to 72 hours.

The group is holding a “Thank JBE” rally outside the governor's mansion tomorrow morning.

WATCH: A third of pro-choice women change their view of abortion after seeing this viral video