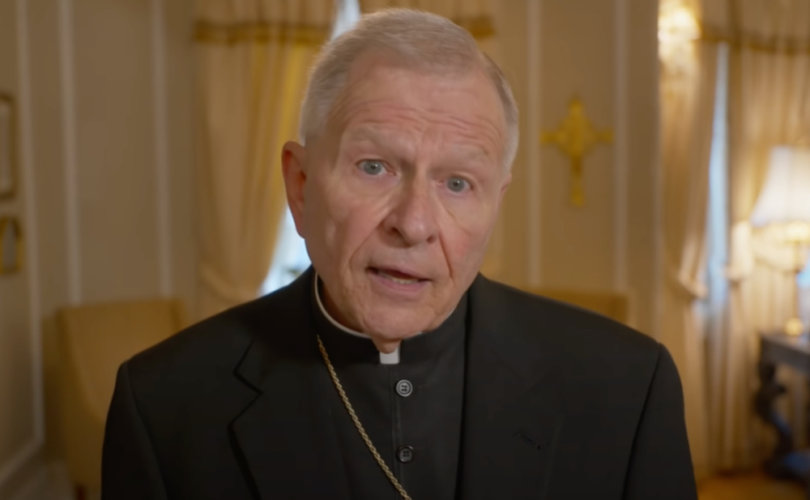 Archhbishop Gregory M. Aymond, Archbishop of New Orleans and one of the directors of the LCCBYouTube

Raymond
Wolfe
Raymond Wolfe
Comments
80
Secure a home for canceled priests: LifeFunder
This article has been updated with a statement from Louisiana Right to Life.

BATON ROUGE (LifeSiteNews) – The Louisiana Conference of Catholic Bishops (LCCB) has come out in favor of emergency contraception for cases of rape, despite the abortifacient nature of the measure and the Vatican’s insistence that it is morally impermissible.

In recent comments to Louisiana newspaper The Advocate, Tom Costanza, executive director of the LCCB, which speaks on behalf the Louisiana Catholic bishops on matters of public policy, endorsed a new state law requiring hospitals to dispense emergency contraception to sexual assault victims.

Act 513, passed in anticipation of the reversal of Roe v. Wade and signed last month by Gov. John Bel Edwards, a professed Catholic, requires “all licensed hospitals in this state” to offer emergency contraception pills to rape victims on demand.

According to The Advocate, Costanza said the language of the law “was reviewed by the church” and found to conform with directives issued by the United States Conference of Catholic Bishops (USSCB).

“A female who has been raped should be able to defend herself against a potential conception from the sexual assault,” Costanza said, adding that “after appropriate testing, she can be treated with appropriate medication to prevent ovulation.”

Emergency contraception is commonly believed to prevent pregnancy by stopping ovulation. But recent research has shown that it does little to prevent a woman from ovulating, though it can effectively kill an embryo by blocking it from implanting in the uterus.

In a 2015 statement on emergency contraception, the Catholic Medical Association concluded that, based on the scientific literature, Plan B, the most popular form of morning-after pill, “does not prevent ovulation and fertilization when given during the fertile window” and cannot be considered morally licit. Plan B “cannot be given prior to ovulation without having a possible postfertilization effect on a new human life,” the association determined, reaching similar conclusions about other forms of emergency contraception, including copper IUDs and ulipristal acetate, or ella.

The Advocate also quoted Benjamin Clapper, the executive director of Louisiana Right to Life (LRTL), appearing to endorse emergency contraception, but in a statement provided to LifeSite, Clapper said there was miscommunication with the newspaper and that LRTL does not “endorse or promote” Plan B.

The group is “opposed to Plan B when it acts to prevent a newly created life from implanting in the uterus, but neutral when it acts as a contraceptive,” according to the statement. “Louisiana Right to Life opposes the destruction of a human life, including a human embryo, from fertilization through natural death,” but does not oppose “measures which prevent the union of the sperm and the egg prior to fertilization,” it also said.

As the Catholic Medical Association noted in its 2015 statement, however, research has “demonstrated that, unless given at very high doses, [Plan B] has no effect on cervical mucus, sperm motility, or the ability of sperm to fertilize the ovum” and still risks threatening an embryo when given prior to ovulation.

Biological science confirms that life begins at fertilization, not implantation, and the Catholic Church emphatically teaches that the human person “must be respected and protected absolutely from the moment of conception,” according to the Catechism of the Catholic Church.

“Since it must be treated from conception as a person, the embryo must be defended in its integrity, cared for, and healed, as far as possible, like any other human being,” the Catechism adds.

Emergency contraception condemned by the Church

As Costanza noted, the USSCB has issued controversial guidelines, published in 2001, approving emergency contraception for rape, stating that a woman “may defend herself against a conception resulting from sexual assault” by using the measure, provided that “appropriate testing” has found “no evidence that conception has occurred already.”

Those directives, however, conflict with a statement published by the Pontifical Academy of Life (PAL) from 2000 unequivocally condemning emergency conception as a morally impermissible abortifacient agent.

The morning-after pill “has a predominantly ‘anti-implantation’ function,  i.e., it prevents a possible fertilized ovum (which is a human embryo) … from being implanted in the uterine wall by a process of altering the wall itself. The final result will thus be the expulsion and loss of this embryo,” the PAL said.

Such a process is “really nothing other than a chemically induced abortion,” it added.

“Consequently, from the ethical standpoint the same absolute unlawfulness of abortifacient procedures also applies to distributing, prescribing and taking the morning-after pill,” the PAL insisted. “All who, whether sharing the intention or not, directly co-operate with this procedure are also morally responsible for it.”

— Article continues below Petition —
CANCELED: Stand with Fr. JesusMary after he was BARRED from Priestly Ministry for Criticizing Pope Francis!
Show Petition Text
9835 have signed the petition.
Let's get to 10000!
Thank you for signing this petition!
Add your signature:
Show Petition Text

Then-PAL head Bishop Elio Sgreccia reiterated the Academy’s condemnation of the drug in an interview with LifeSiteNews in 2008, specifically affirming that the emergency contraception is illicit even when used in cases of rape.

The Congregation for the Doctrine of the Faith further denounced morning-after pills and IUDs in its 2008 instruction Dignatis Personae, declaring that they fall “within the sin of abortion” and are therefore “gravely immoral.”

The Catholic Church, moreover, holds that contraception itself is an “intrinsic evil,” which would bar Catholic hospitals from dispensing the morning-after pill even if it could be used only as a contraceptive, Father Peter Damian Fehler, former North American Superior of the Franciscan Friars of the Immaculate has argued.

“Prevention of procreation is intrinsically evil prior to and independently of any good end which might be achieved thereby, such as avoiding further violence at the hands of a rapist,” Fr. Fehlner has said.

Pope St. John Paul II said as much in a September 1983 speech, declaring that “contraception is to be judged objectively so profoundly unlawful as never to be, for any reason, justified. To think or to say the contrary is equal to maintaining that, in human life, situations may arise in which it is lawful not to recognize God as God.”

Bishops undermining the right the life

Earlier this month, Pope Francis sparked outrage after he defended giving the Eucharist to pro-abortion politicians in the context of the overturn of Roe. Ardently pro-abortion U.S. House Speaker Nancy Pelosi, whose archbishop has formally forbid her from Communion, received the Blessed Sacrament at a papal Mass just days after the Pope’s comments.

Both Pelosi and Joe Biden, who recently issued an order promoting abortion access in the wake of the Supreme Court’s ruling, continue to receive Communion freely in Washington, D.C. under Cardinal Wilton Gregory, an appointee of Francis.

In August, the Pope is also set to elevate San Diego Bishop Robert McElroy to the College of Cardinals, despite McElroy’s history of strongly downplaying the evils of both abortion and contraception and his outspoken defense of Biden and other politicians who facilitate unrestricted abortion.

McElroy has criticized questions of whether Biden can be considered an authentic Catholic in light of his abortion stance and has passionately argued against recognizing abortion as the “preeminent” moral issue facing the Catholic Church.