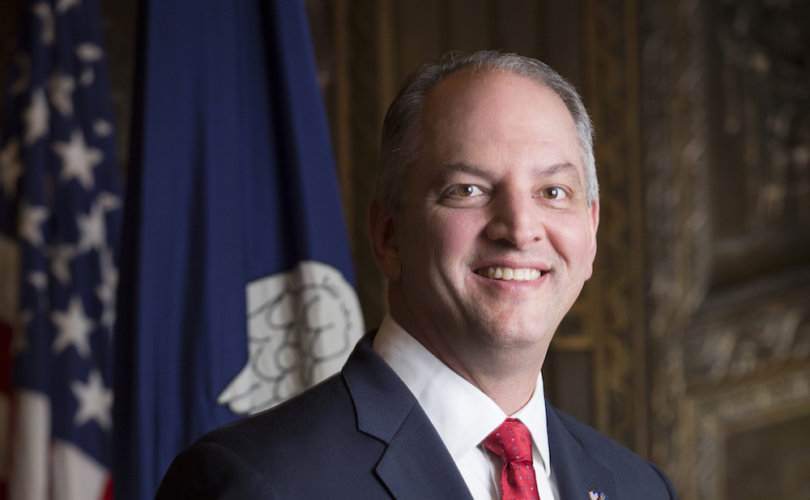 Louisiana state legislators have introduced two bills this session to limit children’s access to “sex change” procedures, and two bills banning gender-confused males from competing in girls’ sports. The measures are pending in committee and have not yet been brought to a vote.

During a press conference on Monday, Edwards said he’s “hopeful that the legislature will not seek to advance those bills.” He added that he did not want to “put the weight of the state” behind the legislation and appeared to endorse the discredited myth that transgender procedures reduce suicides.

Edwards also claimed that the bills would bring an “adverse impact to the state.” Major companies have attacked states over pro-family bills and other conservative legislation in recent weeks. The NCAA has threatened to move championship games, like one scheduled in New Orleans next year, based on transgender policies.

Bills that Edwards signaled opposition to include SB 104, which would mandate parents’ consent for any “gender identity” counseling or medical interventions sought by children. A similar bill, HB 575, would ban transgender procedures for minors outright and prohibit schools from withholding information about students’ gender confusion from parents. Violations could result in up to two years in prison and a $10,000 fine.

“There is a lot of stuff going on all over the country giving kids the ability to make their own decisions at a young age,” State Sen. Mike Fesi, sponsor of SB 104, said. “The parents have to sign off on it if a child has cancer and needs chemo treatment.”

Puberty blockers, the first step in the transgender “transition” process, prevent bone growth, impact adolescent brain development, and inhibit fertility, according to experts. The drugs, which were banned for minors in the U.K. last year, also could lead to increased suicide attempts and other life-threatening complications.

While virtually all affected children grow out of gender and sexual confusion by adulthood, as many as 100% of kids given puberty blockers advance to cross-sex hormones, compromising their fertility for life. The FDA has never approved puberty blockers or cross-sex hormones for individuals suffering from gender dysphoria, and no large, clinical studies ever have been conducted on gender-confused children undergoing the practices.

In addition to SB 104 and HB 575, Louisiana lawmakers have introduced SB 156 and HB 542, which would strictly define sports based on biological sex and open up legal options for female athletes who suffer harm due to male competitors. The bills were sponsored by the chair and vice-chair of the Louisiana Women’s caucus.

Gov. Edward’s opposition would likely kill all four proposed bills. Republicans dominate both houses of the state legislature, but fall short of the two-thirds majorities needed to override a governor’s veto.

Edwards, a Catholic, has previously dissented from Church teaching on marriage and the family, supporting same-sex “marriage” and transgender ideology. The Catholic Church recognizes homosexuality as “objectively disordered” and similarly assesses transgenderism. Protection of the natural family is a non-negotiable issue for all Catholics, including politicians.