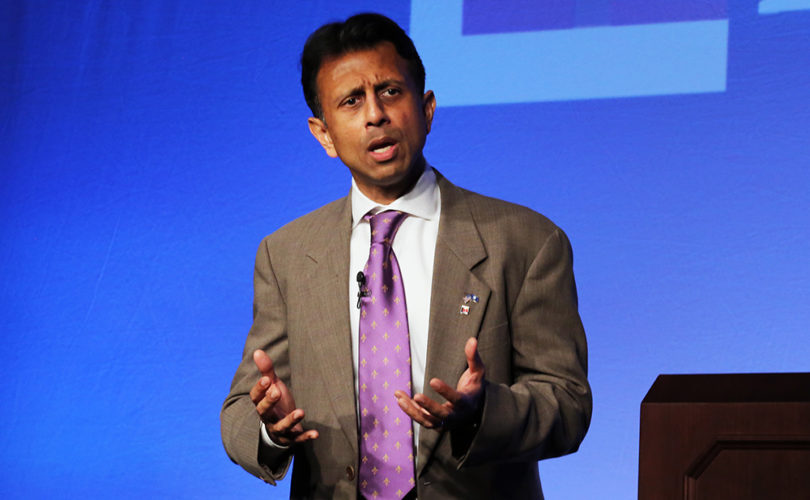 BATON ROUGE, LA, April 10, 2015 (LifeSiteNews.com) — Across America, Republican politicians are backing down on religious liberty after homosexual militants targeted Indiana for its religious liberty law. Economic and political pressure against the Midwest state led governors and legislatures in Georgia, Montana, Arkansas, and elsewhere to back down on similar laws.

But in Louisiana, Gov. Bobby Jindal, a potential 2016 GOP presidential contender, is doubling down on a bill that is arguably even more controversial. Called the “Marriage and Conscience Act,” the bill directly guarantees religious liberty on the issue of marriage.

Jindal spokeswoman Shannon Bates Dirmann told NOLA.com this week that they support it as “a common sense bill that provides necessary protections for individuals to prevent adverse treatment from the state based on religious beliefs regarding marriage.”

Given the controversy that surrounded Indiana's religious liberty measure — which allowed people with sincerely held religious beliefs to challenge government laws they believe unnecessarily infringe upon religious freedom — such an aggressive protection of religious liberty against the homosexual movement is a bold move.

Under pressure from large corporations, including Apple, Indiana Gov. Mike Pence, also considered a potential 2016 contender, ultimately backed off his state law's liberty protections and added a “fix” that was condemned by religious liberty proponents.

However, such a controversy could be a boost to Jindal's profile as an ardent Catholic who has made religious liberty a key part of his potential campaign. Additionally, it could prove beneficial to his struggling effort to garner support among Republican demographics targeted by his better-known potential primary opponents.

The Louisiana law states that it allows business owners to “act or refuse to act in a manner substantially motivated by a sincerely-held religious belief, whether or not the exercise is compulsory or a central part or central requirement of the person's religious belief.”

It also “prohibits the state from taking any adverse action against a person on the basis that such person acted in accordance with a religious belief or moral conviction about marriage,” and “provides for those actions which are deemed to be adverse actions.”

“Adverse actions” are described in detail in the bill, and include the loss of tax benefits and business ownership protections, among others. Businesses are protected from being forced to provide relational benefits for same-sex couples, and courts are prevented from recognizing same-sex “marriages” in the state's constitution.

Jindal has been an ardent supporter of Indiana's original law, appearing on “Meet the Press” this week to defend religious liberty and to express that he was “disappointed” by the changes made by Republicans after the national controversy erupted.

“Let’s remember what this debate was originally all about,” Jindal told host Chuck Todd. “This is about business owners that don’t wanna have to choose between their Christian faith, their sincerely held religious beliefs, and being able to operate their businesses.”

“Now, what they don’t want is the government to force them to participate in wedding ceremonies that contradict their beliefs. They simply want the right to say, 'We don’t wanna be forced to participate in those ceremonies.' So I was disappointed that you could see Christians and their businesses face discrimination in Indiana.”

Jindal declined to support the “Marriage and Conscience Act” when asked about it by Todd; his support came later in the week.

According to NOLA.com, the main sponsor of the Louisiana bill says his measure is designed to protect religious liberty, not discriminate against homosexuals. The bill is still being constructed before it is formally considered by the state legislature.

LifeSiteNews contacted Jindal’s office for comment, but had not heard back by press time.