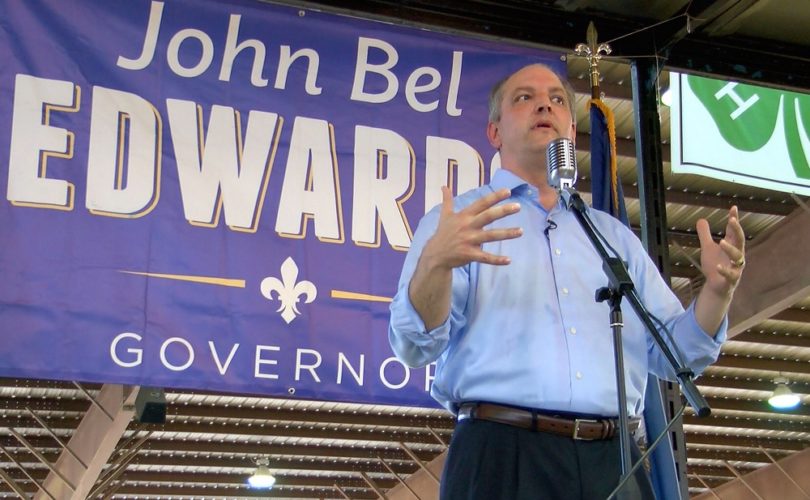 The same spokesperson subsequently told LifeSiteNews Edwards is considering a religious exemption in a pending “non-discrimination” executive order that would protect the religious liberty of business owners, religiously-affiliated organizations, and other groups and individuals with sincerely held religious beliefs about marriage and sexuality.

According to Deadline, Edwards press secretary Shauna Sanford told the site that the governor “will issue the executive order, but it is in the drafting stage. As far as Jindal’s religious liberty order, the governor intends to rescind it in the near future.”

Last year, then-Gov. Bobby Jindal signed an Executive Order to replace legislation that was halted in the state legislature. The bill was intended to protect the religious liberty of those who believe marriage is between a man and a woman.

According to the order, “All departments, commissions, boards, agencies, and political subdivisions of the state are authorized and directed to comply with the restrictions placed upon government action in the Preservation of Religious Freedom Act and, including more specifically, on the basis that such person acts in accordance with his religious belief that marriage is or should be recognized as the union of one man and one woman.”

The order declares that government agencies “shall take no adverse action to” affect a person's tax status, professional status — including, but not limited to, receiving government grants, loans, licenses, or the ability to be hired — or state benefits.

In December, Edwards promised to rescind the Executive Order.

Asked by LifeSiteNews about Edwards' plans to protect religious liberty through his office and that of his state's Attorney General, Sanford said, “In terms of what he will instruct the Attorney General's office to do is follow the law. The governor does not want anyone to be forced to do anything they don't want to do, within the confines of the law.”

“He is going to rescind that order, as he mentioned months ago, and he is going to issue an Executive Order that state contractors have a non-discrimination clause because he does not believe that it is right for anyone to be discriminated against because of their race, their gender, their sexual orientation. He believes in fairness.”

Asked to clarify whether Edwards would support so-called “non-discrimination” laws that have led to lawsuits against business owners and others in several states, Sanford said that “the governor is for equal protection for everyone within the confines of the law. He is certainly not seeking to impose anything on anyone that does not fall within the scope of the law. So he is working in that effort to make certain that no one is discriminated against because of differences, and will continue to operate within confines of the law, even for those people who perhaps have different opinions about it [marriage].”

A religious exemption “is in the talks of inclusion, but we're working on that,” said Sanford.

“John Adams said, ‘Statesmen may plan and speculate for liberty, but it is religion and morality alone, which can establish the principles upon which freedom can securely stand,'” said Landry. “I share the American founders’ belief in the importance of religious liberty and freedom of conscience….Our Founding Fathers early on recognized that religious freedom is a natural right that no government can deny, and they enshrined their belief in the First Amendment to our Constitution.”

“Our liberty today is under assault from unelected judicial activists determined to subvert the moral foundations upon which our great State and nation were built. I will defend religious freedom, protect the sanctity of life, and support family values.”