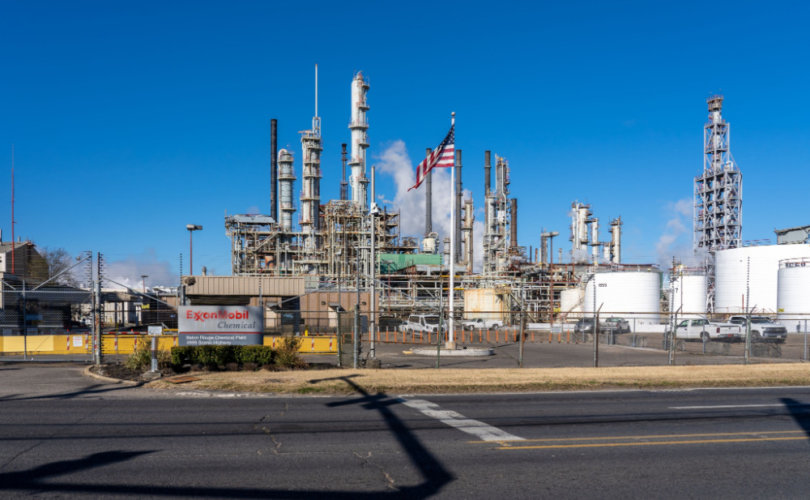 (LifeSiteNews) – Louisiana is pulling $794 million in treasury funds from the asset management behemoth BlackRock over its woke “green energy” priorities.

Schroder announced Wednesday that Louisiana had already withdrawn $560 million from BlackRock and that $794 million would be removed by the end of 2022.

Louisiana’s treasurer has explained that BlackRock’s embrace of “net zero” Energy, Social, and Governance (ESG) investment strategies would harm the state’s oil and natural gas industry, which is tied to one-quarter of Louisiana’s gross domestic product, according to American Petroleum Institute.

Low-carbon or net-zero ESG standards are highly unfavorable to the oil and gas industry, since the industry’s operations “account for 9 percent of all human-made greenhouse-gas (GHG) emissions,” and it also produces the fuels that create another 33 percent of global emissions,” according to McKinsey and Company.

Accordingly, Schroder argued that “mandates” being called for by BlackRock would “cripple” the state’s energy sector.

“I refuse to spend a penny of Treasury funds with a company that will take food off tables, money out of pockets and jobs away from hardworking Louisianans,” Schroder continued in his statement.

The treasurer said in his letter to Fink that BlackRock’s approach fails in its fiduciary duty to investors.

“A focus on political or social goals or placing those goals above the duty to enhance investors’ returns is unacceptable under Louisiana law,” Schroder said.

“They are pushing their agendas contrary to the best interests of the people whose money they are using!” he added. “This is a complete disregard for personal liberty.”

Hild accused BlackRock of “using the people of Louisiana’s money to advance a destructive agenda that raises costs for consumers in the state and across the country.”

He went so far as to claim that “the seeds of today’s energy crisis were planted by BlackRock and others in their reckless abandonment of their fiduciary duty to cozy up to radical, woke politicians.”

Derek Kreifels, CEO of the State Financial Officers Foundation, similarly argued that BlacRock’s “reckless agenda is robbing Americans of their retirement dollars and driving up the costs of everyday goods like groceries, gas, and energy.”

Louisiana is the latest of several red states, including Texas, Utah, West Virginia, and Arkansas, to withdraw funds from BlackRock over its ESG climate agenda.

Justin Danhof, a leading corporate activist, has warned that leftist groups use big business as a “back door” through which they push their woke agenda.

“Why do they use big business as the vehicle? It’s because whatever they can’t get through their front door — through the courts, through the legislatures — they get through the back door, through corporate America to affect business culture, which then permeates the rest of American culture,” Danhof explained during this year’s National Conservatism conference in Miami, Florida.

According to Danhof, “It wasn’t until 2018,” once BlackRock “had become the world’s largest asset manager that they pulled a bait and switch,” and resolved to “be much more aggressive in voting their proxy battles,” “specifically related to ESG” investments.

Danhof said that in 2018 BlackRock went so far as to vote against 5,400 board members “because they weren’t taking enough action” on climate change, in the view of BlackRock CEO Larry Fink.

BlackRock is currently the world’s largest asset manager, with over $8.5 trillion in assets under management, and is partnered with the globalist, authoritarian World Economic Forum (WEF).