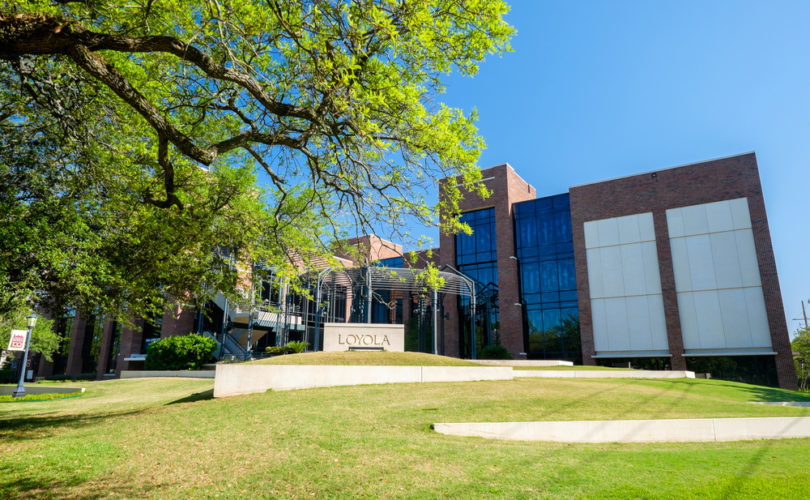 Loyola University New Orleans’ faculty senate recently approved a proposal urging the University “to extend the same employee benefits to same-sex couples as heterosexual couples,” according to The Loyola Maroon. This move, which the administration may accept or reject, comes in the wake of actual policy changes at two other Catholic universities which were met with criticism by local bishops.

The proposal approved by the faculty senate came from the University’s Fringe Benefit Committee. Made up of full-time faculty and staff members, the committee’s website description states that it “function[s] in an advisory capacity to the University President, Director of Human Resources and the Manager of Benefits and Payroll” and “provide[s] input and feedback relating to University sponsored employee benefit plans.”

“It was very encouraging to see the level of support for a policy of equality,” Chuck Nichols, Fringe Benefit Committee and faculty senate member, told the Maroon. “It will make our university stronger, and most importantly, it is the right thing to do.”

The Maroon reported that “due to the university’s Catholic identity, there was some debate about whether giving same-sex couples these benefits was the right thing to do.”

However, the faculty senate reportedly agreed to approve the proposal encouraging benefits for “all spouses and domestic partners of benefit-eligible Loyola University employees.”

“Our Ignatian values teach us that it is our obligation to stand in solidarity with the marginalized and oppressed,” Naomi Yavneh Klos, director of the University Honors Program, reportedly said. According to the Maroon, Yavneh claimed that “the final proposal fit the social justice component of Loyola’s Jesuit mission.”

Yavneh also told the Maroon that due to the University’s support of “legally-married spouses who have been divorced and remarried, which the Catholic Church does not recognize as legitimate marriage, the school should also support same-sex couples.”

“When Jesus changes the water into wine at the wedding feast, I don’t see him doing a background check on the bride and groom,” Yavneh reportedly stated in the article.

Recently, Creighton University and the University of Notre Dame drew criticism from their local bishops for extending benefits to same-sex spouses of employees. The moves by the two Catholic universities followed the recognition of same-sex marriage in several states after the U.S. Supreme Court refused to hear appeals of lower court cases striking down same-sex marriage bans.

Archbishop George Lucas of Omaha stated that Creighton had “failed to fulfill [the] expectation” of helping society “see a just path forward, rooted in faith and founded on the rich Catholic intellectual tradition.”

Bishop Kevin Rhoades of Fort Wayne-South Bend similarly voiced his disappointment with Notre Dame’s decision, stating that “Catholic teaching on the heterosexual nature of marriage is more than ‘a view’… [it] is an objective truth known by (right) reason and revelation.”