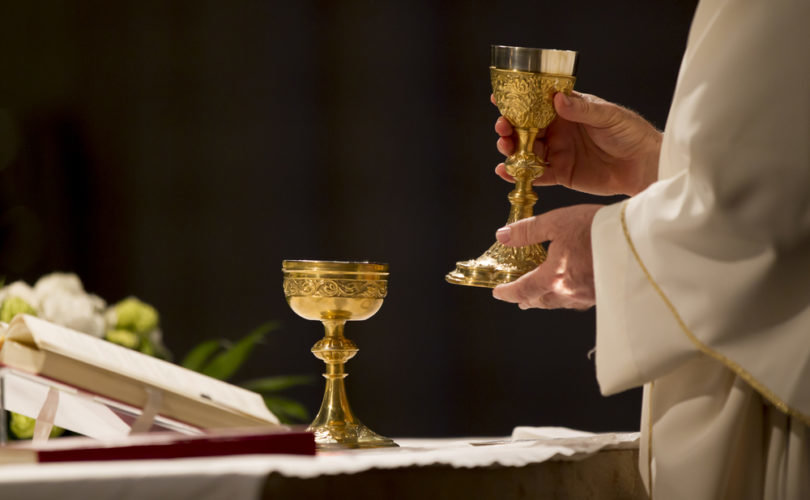 January 26, 2016 (LifeSiteNews) – A spokesman for the Catholic diocese of Helsinki says that the recent case of a Finnish Lutheran bishop receiving communion in the Vatican was a mistake, and that the rules regarding the reception of the Eucharist in Catholic churches remains the same.

Tervaportti called the incident an “error that occurred in the distribution of communion,” and stated that if communion is offered to Lutherans, “it is because of the ignorance of the minister of the Eucharist and it can still be politely refused.”

He also rejected the claim by the Lutheran bishop, Samuel Salmi, that this act represented a “new attitude” on the part of the Vatican.

“Contrary to Samuel Salmi’s speculation, it is useless to draw the conclusion that the Vatican has a ‘new ecumenical attitude’ based on the occurrence of an error that occurred in the distribution of communion,” wrote Tervaportti. “The doctrine and practice of the Catholic Church with regard for whom it is possible to receive Holy Communion has not changed in recent years and decades. If it does change, it will not happen ‘in the field,’ but through an alteration of Church law and additions to teachings regarding the sacraments of the Catholic Church.”

See a translation of the Helsinki diocese’s full statement here.

Tervaportti acknowledged that “there are some very special exceptions” to the rule of only Catholics receiving communion, “but nonetheless to receive the Eucharist one must accept the Catholic doctrine regarding it and to be eligible to receive this holy sacrament (for example, living in a relationship other than a true Christian sacramental marriage is an obstacle).”

As LifeSiteNews reported on Thursday, Bishop Salmi recently told the Finnish news agency Kotimaa 24 that he had received Holy Communion in St. Peter’s Basilica on January 15, while he was present as the head of a delegation that included a Lutheran choir that was to perform there. Salmi said that he had also been received by the pope during the visit.

Salmi told Kotimaa 24 that the choir had been permitted to perform during the mass at the basilica, and that everyone was aware that Lutherans were present. Despite this fact and the fact that the Lutheran attendees placed their hands on their left shoulders in a sign that they were not to receive communion, the Catholic priests insisted on giving it to them. “I myself accepted it,” he said.

“At the root of this there is, without a doubt, the ecumenical attitude of a new Vatican,” Salmi told Kotimaa 24. “The pope was not here at the mass, but his strategic intention is to carry out a mission of love and unity. There are also theological adversaries in the Vatican, for which reason it is difficult to assess how much he can say, but he can permit practical gestures.”

The pope’s own words regarding communion for Lutherans have added to the confusion. Last year, when asked by a Lutheran woman about the possibility of receiving communion with her Catholic husband, Francis acknowledged that “explanations and interpretations” of communion may differ between Catholics and Lutherans, but “life is bigger than explanations and interpretations.” He advised the woman to “Talk to the Lord and then go forward.” Cardinal Robert Sarah, the prefect of the Vatican’s Congregation for Divine Worship, later affirmed the Church’s traditional teaching on intercommunion.

The Diocese of Helsinki also clarified that the claim made in the Kotimaa article of an “ecumenical mass” celebrated by both Lutherans and Catholics in the Vatican on January 18 is also incorrect.

“The article also mentioned that during the ecumenical visit to Rome, the Bishops of Helsinki Teemu Sippo SCJ, (Orthodox Bishop) Ambrosius and (Lutheran Bishop) Irja Askola had ‘celebrated’ an ‘ecumenical mass’ together for the feast day of St. Henry (of Uppsala),” wrote Tervaportti. “This is not so. Every other year there is a Catholic mass in which representatives of other churches participate in ecumenical spirit—for example, by preaching. In every other year it is a Lutheran Lord's Supper, where either a Catholic bishop or priest will preach. The service therefore always follows that church’s own tradition and practice. It is notable that even in these masses the painful fact that there is no communion between the churches is mutually respected.”

Canon 844 of the Catholic Church’s Code of Canon Law normally only permits the Eucharist to be given to Catholics in the state of grace (that is, not in a state of grave sin), except in cases of members of Churches which have been approved by the Holy See. In danger of death or other cases of “grave necessity” the Eucharist may be given to other non-Catholic Christians who share the same faith as Catholics regarding Holy Communion. In recent dialogue between Lutherans and Catholics some agreement has been reached regarding Eucharistic doctrine, but differences remain.

Note: This article previously stated that Lutherans do not share the Catholic faith in the “real presence” of Christ in the Eucharist. However, Lutheranism does profess a belief in the “real presence” in relation to Holy Communion. Whether or not this term is used in the same way as Catholics use it is a matter of ongoing dialogue between Catholics and Lutherans and is beyond the scope of the article, and so the term has been eliminated. We apologize for any confusion.

Lutherans receive Communion at Vatican after meeting with Pope: report