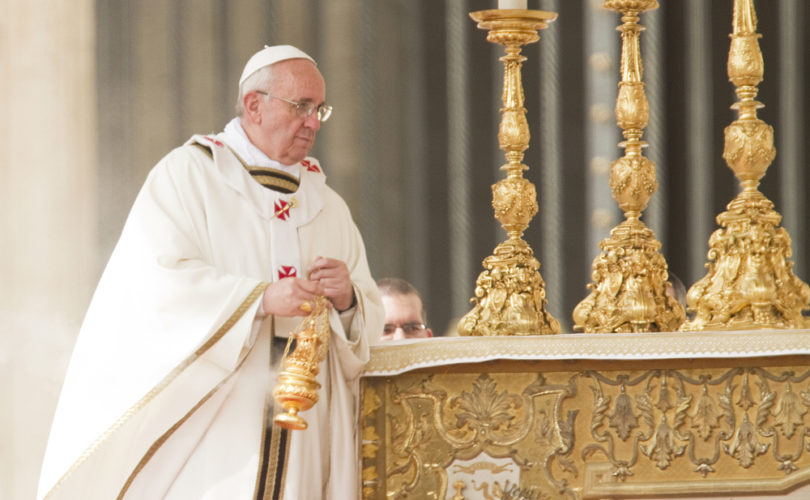 ROME, January 21, 2016 (LifeSiteNews) – A group of Finnish Lutherans were offered Holy Communion by priests at a mass held in St. Peter's Basilica following a meeting with Pope Francis on January 15, according to a report by the Finnish periodical Kotimaa 24.

Lutheran bishop Samuel Salmi was visiting the Vatican as the head of a delegation that included a youth choir that was to perform there. Salmi says he met privately with Pope Francis.

After the personal audience with the pope, the delegation was present at a celebration of the Catholic mass. According to Salmi, at the time of communion the non-Catholics placed their right hands on their left shoulders, a traditional way of indicating that they were ineligible to receive the Eucharist. However, the celebrating priests insisted on giving them communion.

Salmi told Kotimaa 24 that “I myself accepted it [Holy Communion].” He added that “this was not a coincidence,” and nor was it a coincidence when last year the pope seemed to accept the notion of a Lutheran woman receiving communion with her Catholic husband. The original article, written in Finnish, was translated for LifeSiteNews by Voice of the Family's Maria Madise.

RELATED: Pope’s advice to Lutheran woman: A clue to how he’ll rule on Communion for the ‘remarried’?

“At the root of this there is, without a doubt, the ecumenical attitude of a new Vatican,” Salmi told Kotimaa 24. “The pope was not here at the mass, but his strategic intention is to carry out a mission of love and unity. There are also theological adversaries in the Vatican, for which reason it is difficult to assess how much he can say, but he can permit practical gestures.”

The visit took place just three days before an annual ecumenical delegation to Rome on the part of Catholic, Orthodox, and Lutheran Finns to celebrate the feast day of St. Henry of Uppsala, who is credited with the evangelization of Finland in the 12th century.

In his remarks to the Finnish delegation on the January 18, Francis seems to hint at the movement towards intercommunion when he tells the ecumenical delegation, “Your dialogue is making promising progress towards a shared understanding, on the sacramental level, of Church, Eucharist and Ministry. These steps forward, made together, lay a solid basis for a growing communion of life in faith and spirituality, as your relations develop in a spirit of serene discussion and fraternal sharing.”

Canon 844 of the Catholic Church’s Code of Canon Law normally only permits the Eucharist to be given to Catholics in the state of grace (that is, not in a state of grave sin), except in cases of members of Churches which have been approved by the Holy See. In danger of death or other cases of “grave necessity” the Eucharist may be given to other non-Catholic Christians who share the same faith as Catholics regarding Holy Communion. In recent dialogue between Lutherans and Catholics some agreement has been reached regarding Eucharistic doctrine, but differences remain.

In addition to its implications for Catholic-Lutheran relations, the event may also represent the pope’s liberal inclinations regarding the giving of communion to other groups, such as those who are divorced and civilly remarried without having received an annulment of their previous marriage.

Francis has repeatedly insinuated that he wants to change the practice of refusing communion to the divorced and remarried, speaking warmly of Catholic theologians – such as Cardinal Walter Kasper – who advocate such an approach. However, he has yet to announce any decision on the matter.

The pope’s Prefect of Divine Worship, Cardinal Robert Sarah, has expressed profound concerns about the pontiff’s tendency to open communion to those whose beliefs or behavior are inconsistent with the Catholic faith.

“It’s not that I have to talk to the Lord in order to know if I should go to Communion,” he told Aleteia reporter Diane Montagna in late November. “No, I have to know if I’m in accord with the rule of the Church.”

“It’s not a personal desire or a personal dialogue with Jesus that determines if I can receive Communion in the Catholic Church,” he added. “How can I know that the Lord has really said: ‘Come and receive My Body.’ No. A person cannot decide if he is able to receive Communion. He has to have the rule of the Church: i.e., being a Catholic, being in a state of grace, properly married [if married].”

Correction: An earlier version of this article incorrectly stated that Bishop Salmi and his delegation visited with the ecumenical delegation from Finland on January 18. Salmi's visit occurred three days earlier, on January 15.

Note: This article previously stated that Lutherans do not share the Catholic faith in the “real presence” of Christ in the Eucharist. However, Lutheranism does profess a belief in the “real presence” in relation to Holy Communion. Whether or not this term is used in the same way as Catholics use it is a matter of ongoing dialogue between Catholics and Lutherans and is beyond the scope of the article, and so the term has been eliminated. We apologize for any confusion.