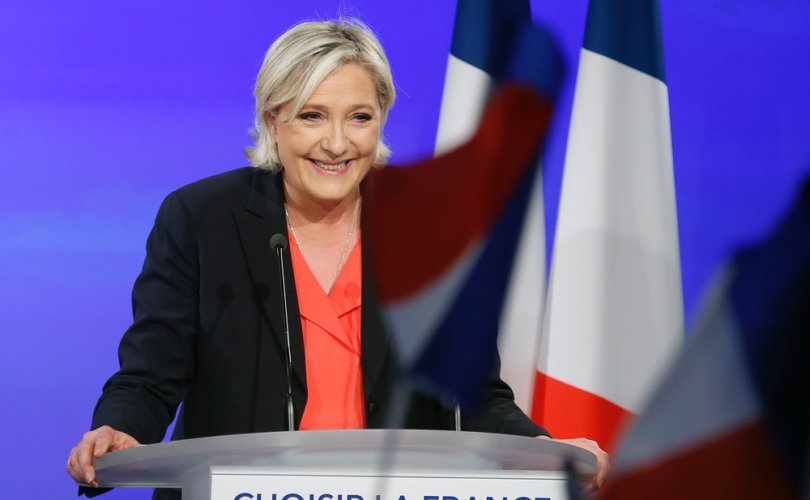 (LifeSiteNews) – Following two years of cruel and abusive COVID policies and despite an unprecedented increase of France’s public debt, public discontent over inflation and the cost of energy, and a scandal surrounding his use of McKinsey and Co to guide important portions of public policy, outgoing president Emmanuel Macron obtained the highest number of votes in the first round of the presidential election that took place on Sunday. With exactly 27.85 percent of the votes cast, he will face the so-called “extreme right” candidate Marine Le Pen – who obtained 23.15 percent – at the run-off in two weeks, on April 24.

This is the second time Macron and Le Pen will be competing for the second round. This time, they headed a field of 12 candidates.

Marine Le Pen, though far from ideal, favors national sovereignty over globalism: she wants to pull France out of the integrated NATO command, hold a referendum on immigration, favor “economic patriotism,” suppress wealth tax on real estate and shift it to speculative wealth that has been highly favored by Macron during his five-year term. Le Pen also wants to set up laws and benefits that will help families, “the fundamental cells of society” to have more children – particularly French families with at least one French parent, while reducing inheritance taxes. Her official program slammed the “suspension of fundamental liberties” during the COVID crisis. She has committed to scrap the vaccine pass and to reinstate health and other workers who lost their jobs and all income because they did not comply with vaccine mandates.

Some left-wing aspects of her program may attract left-wing voters to Le Pen in two weeks’ time.

Of potential voters, 26.31 percent (12,824,125 in total) abstained, a higher number than in recent presidential elections.

Both qualified candidates of the first round increased both their percentage and their number of voters compared with 2017: Macron obtained 9,785,578 votes against 8,126,369 for Marine Le Pen.

One exit poll survey quoted on Sunday evening by France’s largest television channel, TF1, suggested that the results could be extremely close. Globalist candidate Emmanuel Macron was credited with 51 percent of voting intentions, against 49 for Marine Le Pen, both numbers being within the poll’s margin of error. This is by far the closest poll since Le Pen, father or daughter, made it to the second round of the elections (which happened in 2002 and 2017).

Marine Le Pen will be able to count on a good proportion of carry-over of votes from Eric Zemmour, a new-comer to the field who obtained 7.07 percent of the vote on a much more traditional right-wing ticket than Le Pen. Zemmour’s campaign was centered on civilizational and family values, the fight against non-European immigration, sending home illegal or delinquent immigrants, the recognition of Islam as a threat to Western culture, favoring the French in France, and lowering taxes and increasing security. He also opposed further abandonments of sovereignty to the European Union and the use of the educational system for the spreading of gender and woke ideology.

In fact, Zemmour’s program, although far from perfect regarding the right to life, was in many ways the least far from pro-life values. He had also committed to reinstating health and other workers who have lost their jobs because of vaccine mandates and to restoring “liberty of prescription” for family doctors who are officially prevented from treating COVID under present rules.

Zemmour has explicitly (and courageously) called on his voters to choose Marine Le Pen against Macron, who famously said he wanted to “piss off” those who refused COVID “vaccines” and added they were “no longer citizens” earlier this year.

This Monday, Macron started his campaign for the second round of elections in the North of France and was promptly challenged by a lady over his profane insult towards the unvaxxed. He answered: “I said that in a way that was, quote-unquote, affectionate.” The lady was not convinced.

Another right-wing candidate, Nicolas Dupont-Aignan (2.06 percent of the vote) has also explicitly called on his electorate to vote for Le Pen.

Jean-Luc Mélenchon of “La France Insoumise” (“Insubordinate France”), the Marxist-Leninist and former Trotskyist leader of the left-wing, was eliminated with only 420,000 less votes than Le Pen and 21.95 percent of the vote, demonstrating that communism is far from dead. No one denounces Mélenchon as being of the “extreme left.” In his Sunday evening speech he repeated four times that “not a single vote must go to Marine Le Pen.” Exit polls show, however, that one in four of LFI voters may choose to ignore his appeal.

The institutional right-wing candidate, Valérie Pécresse (Les Républicains) has already called on her puny electorate (4.78 percent of the votes cast, meaning she won’t be able to receive public funding for her campaign as this is only for candidates who get at least five percent of the votes) to vote for Macron, although some of the party’s figureheads have indicated that they will choose Marine.

Anne Hidalgo, mayor of Paris, was the institutional left’s candidate designated by what used to be a powerful socialist party. She obtained a miserable 1.75 percent and also called on her electorate to vote for Macron, as well as the environmentalist candidate, Yannick Jadot, who got 4.3 percent.

Sunday’s election marked the complete collapse of France’s institutional parties (Les Républicains and the Parti socialiste) who formerly were more or less assured of reaching the second round and of obtaining the lion’s share of seats in the two houses of Parliament: what will happen in June when legislative elections will renew the National Assembly is anyone’s guess.

In 2017, Macron’s new “La République en Marche” party benefited from the dynamics of his election: several hundred unknown “LREM” candidates were sent to the National Assembly giving him an almost exclusive majority. This time round, Marine Le Pen headed the field in over one-third of the French “départements,” and there is also a lot of anger over Macron’s five-year record.

A great deal will be at stake when the French head to the polling stations on April 24.

A victory for Macron would give him a free hand to continue with his globalist policies – he is close to Klaus Schwab and the World Economic Forum – and his economic choices that are leading to the pauperization of the middle classes, while woke and “anti-discrimination” ideology progress in every field of society.

One of the first declarations of his gay spokesman, Gabriel Attal, this Monday morning, was that Macron would continue to uphold “women’s rights” and “IVG” – “voluntary interruption of pregnancy,” a euphemism for abortion – which he is trying to tout as a fundamental European right and which has been facilitated under his watch.

Later in the day, the “Macronist” president of the National Assembly, Richard Ferrand, stated that “the right to die with dignity” – a euphemism for euthanasia – will be “the big societal reform of Macron’s second five-year term.”

Regarding the COVID crisis, Macron has already made clear that the vaccine pass, lifted on March 15 (in view of the election?) would remain an option if the sanitary situation should deteriorate in autumn and winter (as it always does, with pressure on hospitals being higher in the cold months). He said the vaccine pass, that deprives the unvaccinated of many fundamental liberties, was both “intelligent and proportionate,” despite the fact that the vaccinated can contract and transmit COVID and that infection rates in France were at their highest when over 77 percent of the total population had been “fully vaccinated.”

Sadly, the largest proportion of French voters who chose Macron in the election’s first round were the elderly. Thirty percent of the 60-69 age-group voted for Macron, against 22 percent who chose Le Pen, as well as 41 percent of those aged 70 and over (against 13 percent for Le Pen). Clearly, they see him as the man who “protected” them from COVID, even though Macron imposed the policies that prevented family doctors from treating COVID, banned people from visiting family members in old-age homes, leaving their loved ones to die alone from COVID or other illnesses, and allowed clonazepam (known as Klonopin the U.S.) to be prescribed for the elderly who had COVID: this drug is counter-indicated in case of respiratory distress and can actually kill the fragile and the elderly when given at the doses recommended at the height of the crisis by the French government.

In fact, if it were not for the vote of the over 65 age-group, Macron would not have made it to the second round.

As things stand, France can only pray that freedom wins against all odds, given the hysterical denunciation of so-called “right-wing extremism” that is being levelled at Le Pen. Nearly 3,000 public rosaries now take place every week all over the country since the movement was launched in January. They are France’s true hope.