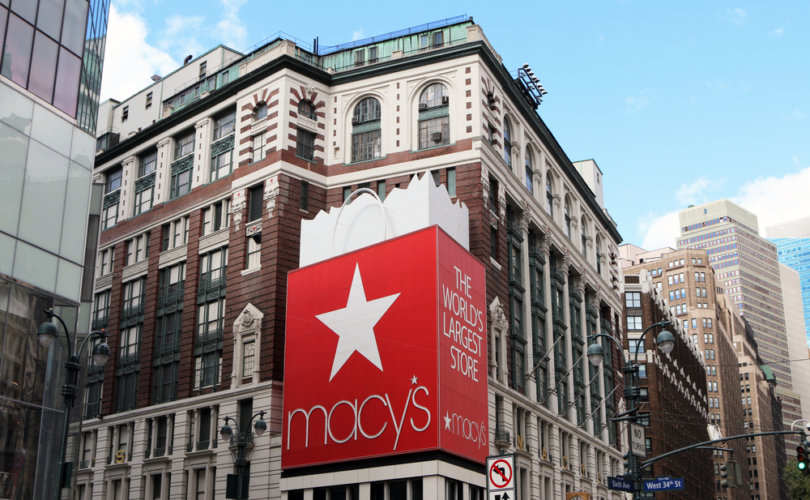 FLUSHING, New York, July 21, 2016 (LifeSiteNews) – Macy’s department store has fired a Catholic employee because he questioned their transgender bathroom policy, even though he says he told his employer he would enforce the policy.

Back in May, Javier Chavez, a senior store detective at Macy’s Flushing, New York, location got a phone call about a male accessing the ladies room along with a female.

A female customer and her daughter were afraid to enter the restroom due the male’s presence there, and a security guard reporting to Chavez directed the man to leave and use the men’s room. The man left, claiming to be a female, before then complaining to the store officials about being asked to leave.

Chavez was later informed by a Macy’s assistant store manager that certain males can use the ladies restroom, something he had not been made aware of prior to the incident. Then an assistant security manager told Chavez that transgender individuals can use the bathroom of their choosing.

Chavez responded that he had just become aware of the policy. He said it was contrary to his religion and the Bible, but said that even so, he would enforce Macy’s policy.

“Macy’s would not leave this alone,” Catholic League President Bill Donohue stated, “and this is where it crossed the line.”

Chavez was then called to a meeting with his human resources manager, who suspended him, and he was subsequently fired.

According to a legal complaint, the retailer terminated Chavez even though he had not previously been made aware that Macy’s allowed transgender individuals to use the bathroom of their choice, and also in spite of the fact Chavez had promised to uphold the policy while working. His case is now before the New York State Division of Human Rights.

“After my employer learned that I was a practicing Catholic, with religious concerns about this policy, I was terminated because of my religion, in violation of the New York State Human Rights Law,” Chavez states in his complaint.

LifeSiteNews inquired with Macy’s for comment but did not receive a response before press time.

Macy’s terminated another employee in the past for acting to maintain the privacy of female customers in accord with personally held religious convictions.

In 2011, Natalie Johnson was fired after telling a cross-dressing male that the ladies’ fitting room was for women only. The San Antonio woman had been instructed by her manager after the exchange to comply with Macy’s LGBT policy under threat of being fired, to which Johnson responded that it was against her religious beliefs. Macy’s let her go the next day.

“I couldn’t lie and say that he was a woman. I’m going to be accountable to what I say to my Lord Jesus,” Johnson said at the time. “I had to either comply with Macy’s or comply with God.”

Donohue said Macy’s had no lawful or moral basis for terminating Chavez, and that in doing so, the retailer acted like a totalitarian regime. He said as well that Macy’s actions conflict with the principle of religious liberty.

“The most basic religious right is the right to believe,” he said. “If conscience rights can be vitiated, the First Amendment means nothing.”

“Macy’s has no legal, or moral, grounds to stand on,” continued Donohue. “For merely holding beliefs that are contrary to the store’s policy, Chavez was fired.”