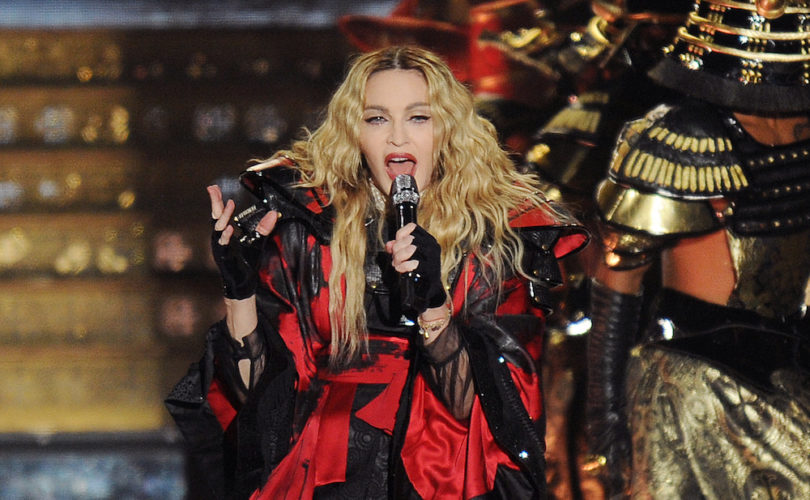 BRISBANE, Australia, March 22, 2016 (LifeSiteNews) – During a concert in Australia, Madonna pulled down a 17-year-old girl's top, revealing her breast to a crowd of thousands – and the girl and her mother promptly thanked the singer. That one moment best illustrates everything that's wrong with modern pop culture, a leading pro-life advocate tells LifeSiteNews.

During one of her concerts on Thursday, Madonna had her entourage ask Josephine Georgiou to come on stage and dance with her. The 57-year-old pop songstress told the crowd that she was sexually attracted to the underage girl.

She then tugged down the oversized, strapless top, which belonged to the teen's mother, exposing the 17-year-old's breast and nipple.

Madonna cursed, clearly surprised at uncovering the girl, who is 40 years her junior, before offering the teen the opportunity to “do the same to me if you like.”

After the teen finished dancing, her mother, Toni Georgiou, immediately registered her reaction on social media. “Madonna just spanked my daughter,” she wrote, “so proud.”

The teenager, a budding model from the Gold Coast, reveled in the attention.

She dismissed concerns over the incident, which is an apparent violation of Australian law, saying that the singer had “no bad intentions,” and that she was not embarrassed in the least. “If anything it was a bonding moment with Madonna,” she said.

Georgiou attended Madonna's final concert in Sydney to show her support for the aging star, who has always been known as much for her looks as her musical talent.

When asked, the minor rebuffed any notion that she would take legal action against the multiplatinum-selling singer, whose first charted hit came 17 years before Georgiou was born.

“Seriously, why would I sue Madonna for the best moment of my life?” the teen asked. “She was calling me a Victoria’s Secret model the whole time I was on stage, which is so flattering.”

But the leader of a nationwide pro-life youth organization tells LifeSiteNews the sexual attention of an adult toward a minor is just one of the many ways a sex-soaked culture distorts young women's notions of themselves.

“The media, and stars like Madonna or Beyonce, push the message that the more sexy or sexual women are, the more ‘empowered’ they are as confident women,” said Emily Brown, the director of ALL Life Defenders, the American Life League's mission to empower youth to create a culture of life.

But Emily Brown said that worldview is categorically false.

When women play down to the immodest expectations of pop culture, “the self-worth and value that all young women have as beautiful and intricate human beings, children of God, is taken away and replaced with lust,” Brown told LifeSiteNews.

“As a young woman in my early twenties, I see this desensitization in the world,” she said. “Whether it is through Instagram, a leaked picture, or on stage, we live in a society where females are being 'exposed' all the time.”

Society really moves forward when women are accepted for their minds, their talents, their femininity, and – above all – their spiritual purity, she said.

“It’s time to take back true ‘empowerment’!” Brown told LifeSiteNews. That means “embracing the unique, beautiful, and intelligent self that God designed all women to be.”