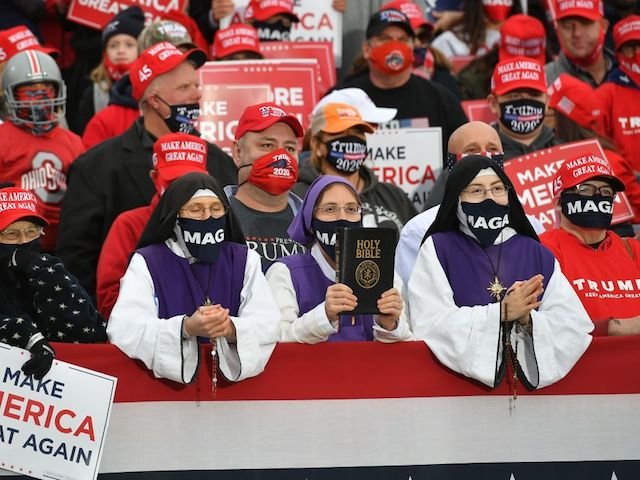 Three sisters from the Children of Mary religious order attend a rally for President Trump in Ohio.YouTube

October 28, 2020 (LifeSiteNews) – Three nuns from the Children of Mary religious community have become overnight internet sensations after they were positioned behind the podium at a rally for President Donald Trump in Circleville, Ohio on October 25.

Two of the fully habited nuns were holding up rosaries and a third held up her Bible.

Two nuns at Trump Rally. One holding up a BIBLE!!! pic.twitter.com/8l9D6qmUae

God bless the Children of Mary, the great nuns at the Trump rally tonight! They bear a beautiful witness to life and liberty! ⁦No more “Nuns on the Bus” garbage- pushing for socialized medicine, and by default contraception and abortion. God bless these good sisters for life! pic.twitter.com/nCW8SNYIOQ

Underneath our political crisis is a moral crisis and underneath that is a spiritual crisis. These nuns understand this, and that’s why they are at Trump’s rally pic.twitter.com/AD5KF5vFFi

While the response to the Children of Mary’s participation at the rally has been overwhelmingly positive, critics such as disgruntled former Republican Peter Vroom led the charge of secularist and liberal Catholic admonishments, “doxing” the nuns for all of Twitter to see.

But the sisters made clear in a public statement and in a conversation with LifeSiteNews that their attendance at the rally was motivated by nothing more than support for a pro-life president.

“There are indeed many issues concerning the quality of life that need to be addressed. However, the pre-eminent issue is the intrinsic evil of taking innocent human life through abortion. We, as faithful Catholics, consider it our duty — a joyful duty — to support a president, irregardless of party affiliation, who upholds the Gospel of Life.”

Among those who expressed support was Sister Diedre “Dede” Byrne, POSC, who addressed the Republican National Convention in August.

“He’s the most pro-life president we’ve had,” Mother Philomena Maria told LifeSite. “We’re trying to do what we feel the Lord wants us to do.”

A closer look at Vroom’s Twitter feed shows him actively trying to divide the Catholic vote, pitting the Children of Mary against other Catholic women’s religious communities.

Vroom posted articles about other Catholic women’s religious communities who are making face masks before tweeting a clip from the Circleville Trump rally that showed the nuns without their MAGA face masks:

“It appears the ‘sisters’ so carefully positioned at the Trump rally were only concerned about protecting life by wearing masks when the cameras were. Shameful.”

Yet conclusive scientific data on the effectiveness of masks both against catching the virus and passing it on is sorely lacking.

He later retweeted an image of Sister Quincy, a self-described feminist who publicly associates herself with the official Black Lives Matter organization, calling her “My kind of nun.”

The Children of Mary were officially founded in the Diocese of Columbus. Their motherhouse is located in Cincinnati and they also have a house of formation and retreat house near Newark, Ohio, in the Columbus diocese. According to the nuns’ website, their charism is “to satiate the Thirst of Jesus to be loved in the Most Blessed Sacrament.”

At the request of Bishop Athanasius Schneider, they recently promoted and joined in the Crusade of Reparation for sins against Jesus in the Holy Eucharist.

Schack provided the following comment: “Each member of the Children of Mary, as an American citizen, has the same right to participate in civic life as does any other American. Their presence at a political rally does not comprise an endorsement of any sort by the Catholic Church.”